Lost my mentor and friend

Ernie
Corporate Member
I just found out that my friend and mentor, Paul Kennedy, has died. In the mid 1980's I met Paul and he took me under his wing. For the next 6 years, he taught me all he knew about harpsichord building. As we lived a couple of miles apart, I was in his shop constantly - asking questions that were always demonstrated and answered. Eventually, he and his wife moved to Indiana to be closer to his daughter. We spoke on the telephone a few times a years ever since, and our conversations lasted for hours.

When I first visited his garage/shop, I was amazed at the lack of machinery I found. He had and old, rickety table saw, and and equally old, and equally rickety bandsaw. It took me years to convince him to buy a planer, which he finally did (probably to shut me up). That was perhaps the first and most important lesson he taught me - it's not always the quality of the machines, but the quality of the man or woman using them, that counts. Here's an example of Paul's work - made with his rickety machinery. 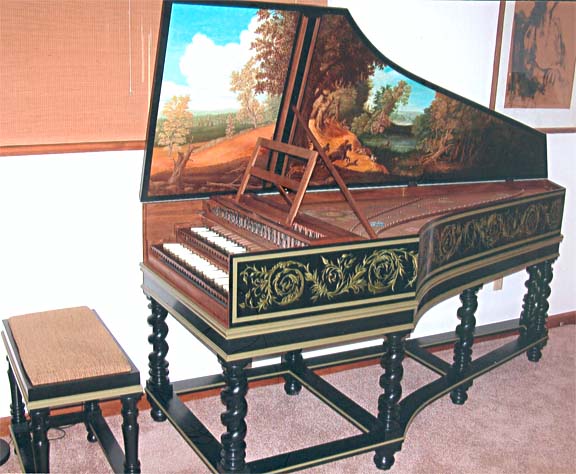 Paul was the kindest, most generous person I've ever known. RIP my dear friend.

Dennis
Corporate Member
Looks like he was pretty handy with a paintbrush too.....
I'm sure you'll miss him.

Bruce Swanson
Corporate Member
My condolences on the passing of your friend Ernie. Looking at the above picture, and seeing the pictures of your creations, I'd say bhe taught you very well!

John
Corporate Member
Ernie, I'm sure he was very proud of the work you do and in knowing he helped you along the way. Our lives are richer because of mentors like Mr. Kennedy. Rest in peace.

Steve
Senior User
Sorry for your loss, mentors like that are a loss to us all. With the quality of work you produce must have made him proud.
C

Scott
Staff member
Corporate Member
Ernie I am so sorry for the loss of your friend. Hang on to all those good memories and honor him in all you do.

Hank
Corporate Member
It is hard to lose someone who had such an impact on your life, but you carry on a little piece of his DNA with your talent. I think it is wonderful that he was so giving and obviously a great teacher!
C

Andy
Corporate Member
Ernie I am sorry for your loss. A bond such as you describe is not something that happens often. I hope you find comfort in the lessons you were taught - it sure seems all of them were not about woodworking! You learned well and I hope will continue to carry on the work for some time to come. Blessed be~

Donn
Corporate Member
Erine, I am so sorry about your loss. I am confident, however, that his legacy can be counted not only in the instruments he crafted but in those he inspired - you! Thank you for sharing him with us.

Dennis
Corporate Member
I will add, too, that your willingness to pass along your knowledge in the form of your harpsichord building file uploaded here shows a continuance of his mentor tradition by you.

Gotcha6 said:
Looks like he was pretty handy with a paintbrush too.....
I'm sure you'll miss him.
Click to expand...

Before his retirement, he was the artistic director for Dover books. Practically every book published by Dover had Paul's artwork on their covers. Ironically, painting harpsichord lids was his least favorite part of the construction - possibly because that's what he did at work for all those years.

Woody
Corporate Member
Sorry for your loss Ernie, it's tough when you lose a close friend. He'll always live on in your memories and stories you share about him.

Joe
Corporate Member
Thanks for sharing, Ernie.
Loss of a good friend is very hard to bear.

Dennis
Corporate Member
Mom always said, "Sorrow shared is sorrow halved and joy shared is joy doubled." Glad you are willing to share bot with us.

Ernie
Corporate Member
Thanks everyone. Most of us can point to a person that has had a profound influence on our lives. Paul was that for me, and he will be missed.
A