The main feature I need is low noise, but also, of course, want reliability and something that will last. 2 HP or greater, and highest air flow for the money are all ideal features. Would like to spend under $300-350 if possible.

I'm considering the newer California Air tools 10020C but don't know much about the alternatives.

The reviews for this one are all over the map! So very hard to know if it's any good or not.

Thanks for your input,

Scott
Staff member
Corporate Member
Bill no experience with them but over the years I have seen a lot of post about the California Air Tools and everyone seems to rave about them.

Bill
User
Thanks Scott. I'll probably order the one I linked; $330 and free shipping. It got an awful lot of 1 star reviews though, so that made me a little nervous. Seems some of them die in less than a year, some parts are cheap, connectors break off, etc.

Ernie
Corporate Member
I bought a 10020C three years ago. Originally, I loved it. It really is quiet and powerful enough for my needs. Lately there have been bad reviews about customer service and I had the opportunity to witness that personally. A few months ago, the unit would not fill up with air. Not being mechanically inclined, I was at a loss as to what to do, so I called them up to see if their techs could at least point me in the right direction. I was told that, since the unit is no longer under warranty, I should take it to a repair center. When I asked them where the nearest repair center was, I was told there isn't one, and there was nothing they could do. I finally tracked down the problem myself. It was a faulty escape valve. I ordered a new one which only cost about $6.00 and now I have a working compressor. It does have a slow leak which causes it to re-fill itself every half hour. That would be really annoying if the unit wasn't so quiet. Hopefully, I'll be able to track down the leak myself as their tech department won't be of any help.

The bottom line is it's a great compressor - when it works. If you need some help from tech services you may be out of luck. That said, if I had to replace it, I would probably buy another one and hope it doesn't develop any problems.

Neal
Staff member
Corporate Member
Ernie, did you put any teflon tape on the replacement escape valve? Try that and see if that will eliminate the loss of air.

bowman said:
Ernie, did you put any teflon tape on the replacement escape valve? Try that and see if that will eliminate the loss of air.
Click to expand...

Yes, I did. I don't think the leak is coming from the valve.
M

Bill
User
Anybody have any luck with the Harbour Freight ultra-quiet unit?

Chris
Corporate Member
I have about 2 years on my CAT compressor. I haven’t had any problems and my single call to tech support was answered right away.
J

joe
User
I recently bought a small California Air Tools compressor for my nail guns and it is extremely quiet.
P

Mike
I bought the Lowe’s Kobalt Quiet Tech 3/4 hp, 2 gallon compressor a few months back when it was on sale. I believe I paid $109 after using my veterans discount.
it is quiet, fairly light (although I cut a small platform for it and set it in wheels. It has a 3 year warranty and is more than ample to power my pinner and brad nailer as well as clean up my shop.
L

Bill
User
I bought the Harbor Freight Fortress 2 gal. a while back and it's very quiet plus it fills amazingly fast. It's almost continuous duty using an air gun at lower pressure.

Mark
Corporate Member
I also bought the Harbor Freight 2 gal fortress, and am very happy with it. It runs a brad nailer with no problem, airs tires, etc, and works fine for blowing off chips, etc. Very quiet (about 50 db). The effective air pressure tops out about 120 psi. (the gauge reads about 130 at cut-off, but when topping off the fire depts truck tires, it wouldn't get them over 120). There is short break in period (running it with the drain valve open for 30 minutes), but after that its good to go. Weighs in about 40 lbs, so is definitely mobile, and with the horizontal tanks, fits easily under a work bench. They occasionally have reduced price coupons for it.
Last edited: Jan 5, 2020
O

Oka
Corporate Member
I have a sound deadening box I keep the compressor in. But I got the Rubetex insulation for free. Rubetex it HVAC insulation comes in 1/2" increments and is rubber foam, it is what we used to do to the old dot matrix printers box them in to lower the sound. Works on compressors also on Rock drum sets if you have a kid playing drums ...

Pop
Corporate Member
I have the Kobalt version It is almost the same compressor you're looking at. I think Lowe's customer service would do a little better than CAT did for Ernie. It's a fine machine and the price is good. Also NO shipping cost.

Bill
User
Thanks everyone. That was very helpful.
I think I'll look at the HF 2 Gallon model. The reviews are very good.....

bbrown said:
Thanks everyone. That was very helpful.
I think I'll look at the HF 2 Gallon model. The reviews are very good.....

Eric Schmidt of HF has said that they are working on a major overhaul for parts availability and serviceability. Hopefully that will translate for the Fortress. Good luck.
N

Jim
Senior User
I have a California Air Tools CAT-1P1060SP, a 1-gal compressor I bought for airbrushing. It it the quietest compressor I've ever seen. I use it inside my home for air brushing miniatures and when it comes on it is so quiet I don't even jump with it sitting right by my feet. 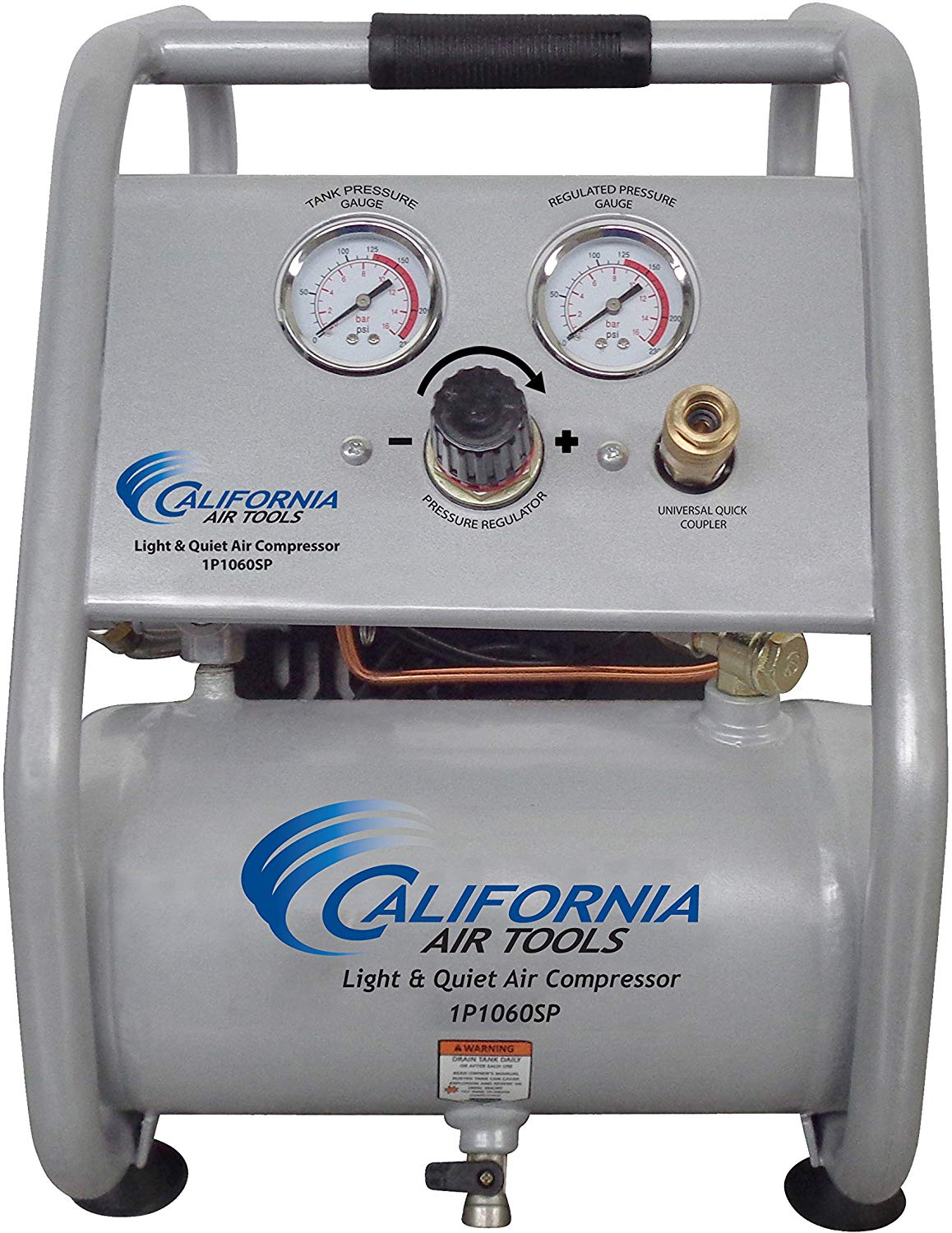 May be a little small for your purposes though.
S

Jerry
Senior User
I have a small one I use for the brad and finish nailers. I've been happy with it. I only wish I had bought one with a slightly larger tank.

Bill
User
This size might be fine. I only use it for blowing dust and shavings, and occ. nail gun/pinner. I want to get rid of my monster compressor which is very loud, probably more power than I need, and taking up too much room.
You must log in or register to reply here.
Share:
Facebook Twitter Reddit Pinterest Tumblr WhatsApp Email Link