Manfre
A neighbor of mine had a 4' diameter oak tree taken down and there are 1' thick slabs of the base of the tree left behind. She says I can have the slabs, if I can move them. They are too big and heavy for me to move (400-500 lbs each) or cut myself (~18" chainsaw bar). I'm interested in two 3-4" thick slabs of one of the sections to make tables.

I've tried to get in touch with scsmith since I know he can handle this size log, but he seems to be out of town. Anyone else near Cary have a portable mill like this that can cut a 48" slab? I am willing to pay to have the slabs cut if the rest of the wood is not payment enough.

If there is no with a sawmill near by, anyone with a chainsaw that can handle cutting these down to thinner, human movable sizes? I figure I can flatten the pieces with a router jig, if I can get them to my garage.

This is the one I want two slabs from. 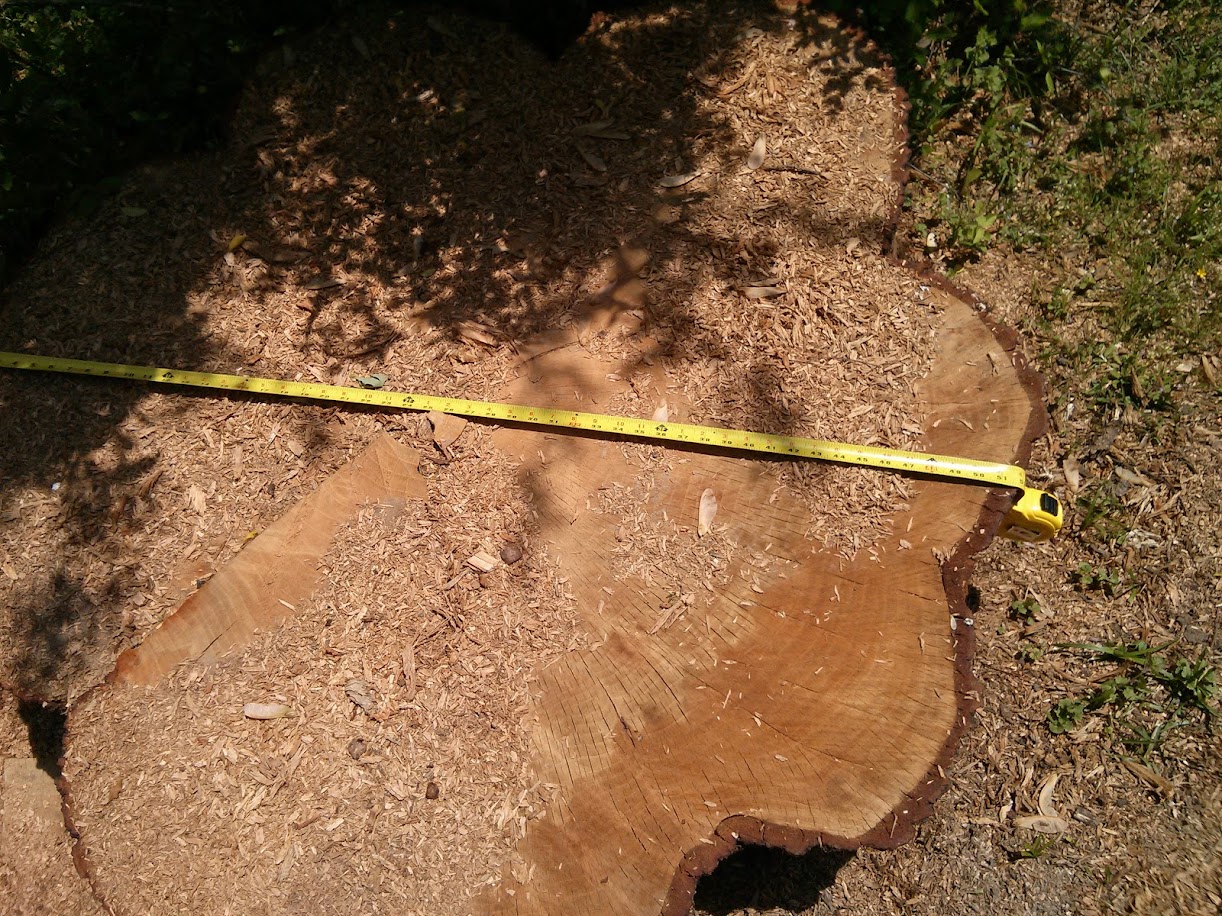 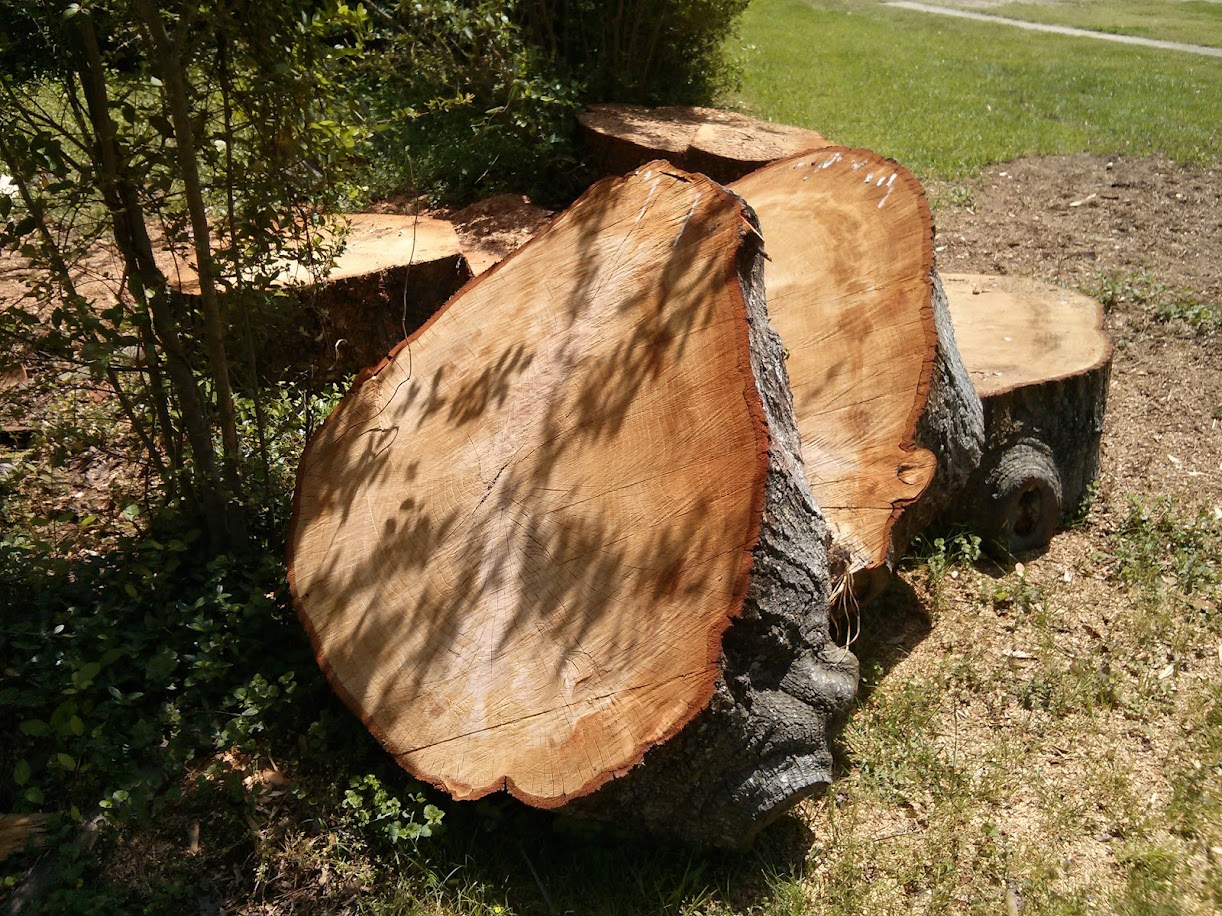 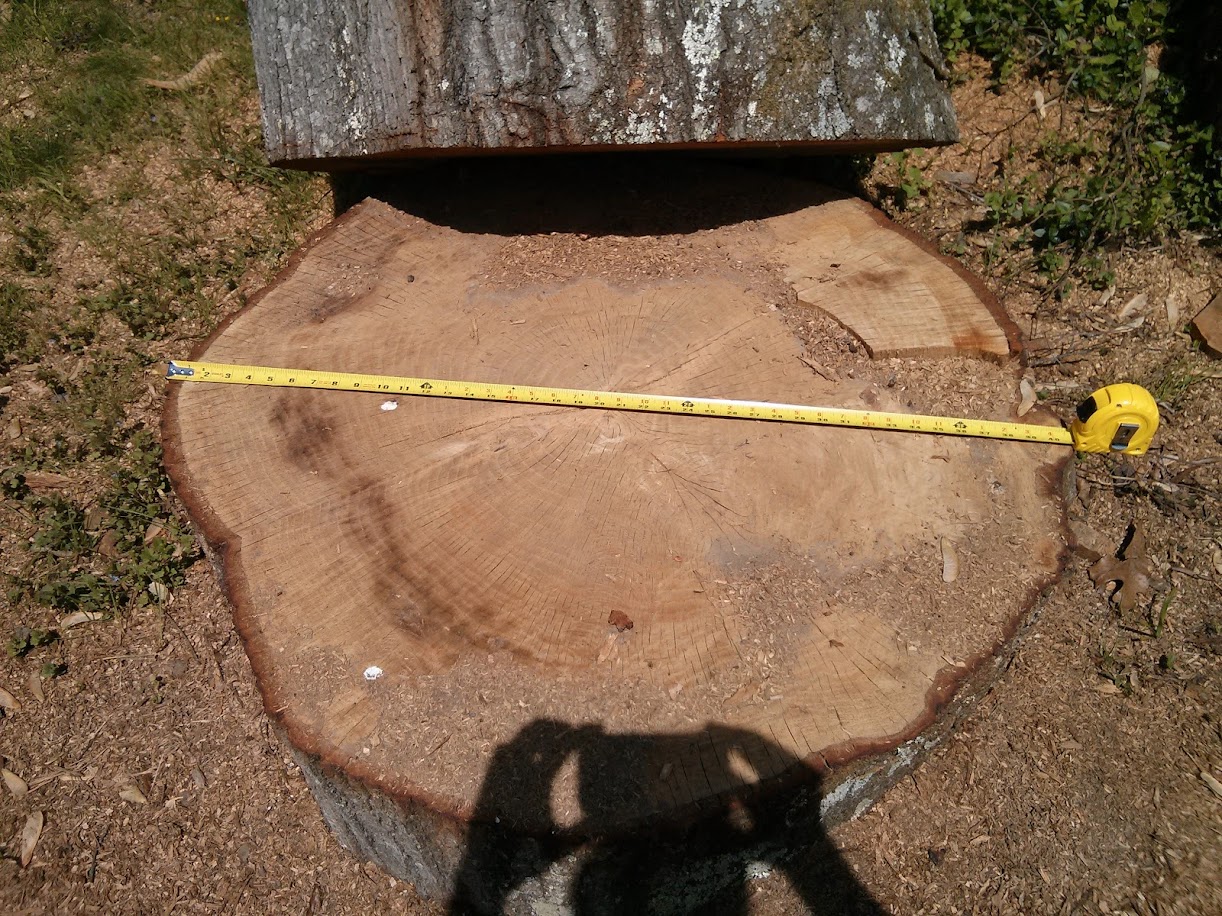 Mark
Corporate Member
I'm afraid all I can offer is some free labor. If you need that, let me know where and when. Hate to see those slabs go to the burn pile.
J

Jeff
You've got your hands full of some nice red oak and I feel the pain way up here in Rougemont. Those logs calculate to about 700 lbs. each and it'd be a shame to send them to the firewood pile.

I'd ask your friend to contact the folks that took the tree down and see if they'd be willing to slab out several pieces for a fee which you'd be willing to pay. Maybe they'd do it as a moonlight job.

Ken
Staff member
Corporate Member
How accessible are they? I have an engine hoist that can lift 2 tons - 1 ton with the boom extended to max - if you could drive a truck or trailer under them once lifted. Looks like they're in the middle of someone's yard though so that might not be practical. You'd still have the problem of cutting them. A two-man crosscut saw would probably do the job - in time.

I figure anchor seal and let it dry for a year, then sand it off when it's dry.
J

Jeff
+1 to Ken's engine lift with a sturdy piece of plywood beneath it so it lifts and doesn't sink into the yard. A low bed trailer with a fold down back ramp would be helpful to skid them up onto the trailer. It's not an engineering show stopper, just a lot of hard work.

Adam
Corporate Member
A set of hand trucks and a trailer with a ramp would get them loaded, but they will still be too thick when you get home. I'm afraid I'm too far away to help, but I have a Husqvarna with a 24" bar and could get my hands on a 28" saw if I needed to. I'd be afraid of them splitting themselves as they dry.

Trent Mason
Another +1 to the engine hoist idea. :thumbs_up:thumbs_up 700 lbs is pretty heavy. I recently moved a 400 lb gun safe and even with two helpers and a hand truck it was a hefty task.

Scott Smith
Michael, if it were me I would suggest the following.

1 - if the round is flat on the ground, dig a small hole under one end so that you can insert a pry bar with block under it. Lever the round up as high as you can, and block it up. Repeat until you have one side a foot or so in the air.

2 - back a small trailer up to it (such as the small, single axle trailers that Northern sells), and put some ramps (2 x 12's) from the back of the trailer to the bottom side of the round.

3. Wrap a chain around the round. You may need to drive a removable nail in through some links to prevent it from jumping off.

4. Use a come-a-long to winch the round up onto the trailer deck.


I don't thing that an engine hoist will be a good option in a yard, as the footing underneath it will not be stable enough to support the weight. Also, the leg spread on most engine hoists is not wide enough to go around the sides of the round.
J

Jeff
A follow-up thought on the useful suggestions by Scott Smith posted above. Four pieces of pipe spanning the 2 x 12s as rollers ala Egyptian pyramid building. A lot of fussing and pipe moving to load it, but maybe helpful and less back breaking.

Manfre
I'm going to burn vacation time for Wednesday to try and get the slab. I'm flexible with time of day so if anyone is interested in joining me, send a PM.

My truck has a ball on the bumper, but I've never towed anything with it and will need to check to see if there are light hook ups and a place to connect the safety chains. It was previously owned by a landscaper and I'm assuming it has everything required. Regardless, the slab only needs to go about 1/4 mile. If it wasn't for walnut st. and my steep driveway, I could probably just use a heavy duty lawn cart and lug it like a mule.

Checklist:
- shovel to dig under slab
- farm jack and scrap wood for base. Should be safer/easier than a pry bar, especially if I'm alone.
- 4x4 posts and cinder blocks to support the slab
- come along
- two 6' sections of 2x12
- I don't have any chains, but I do have a 30' tow strap. Wrapping twice should yield ~6' of extra.
- Scraps of wood to go under slab on the trailer.
- Lots of ratchet straps

Jeff
I'd be happy to come and lend a helping body. I have plenty of chain and a 1.5 ton come-along. If I understand correctly we'll load these on to a trailer towed behind your pickup truck. Right? How about a pic to see what we're working with and where to fasten the straps/chains? I have other stuff too that may be helpful to us.

Manfre
Trailer is hitched and truck is loaded. Anyone else interested in joining Jeff and me for some slab moving "fun" tomorrow morning? If so, send a PM.

Dave
Corporate Member
Pictures (or video) of this effort, please!!!

Manfre
Jeff and I rolled up to the oak slab prepared to battle gravity and friction. We had chains, pry bars, tow straps, come along, farm jack, 3/4" bars for rollers, and enough other tools that required us to take separate vehicles.

Only a few minutes after backing up the trailer, I blinked and Jeff was standing over the trailer yelling "TA DA!!" 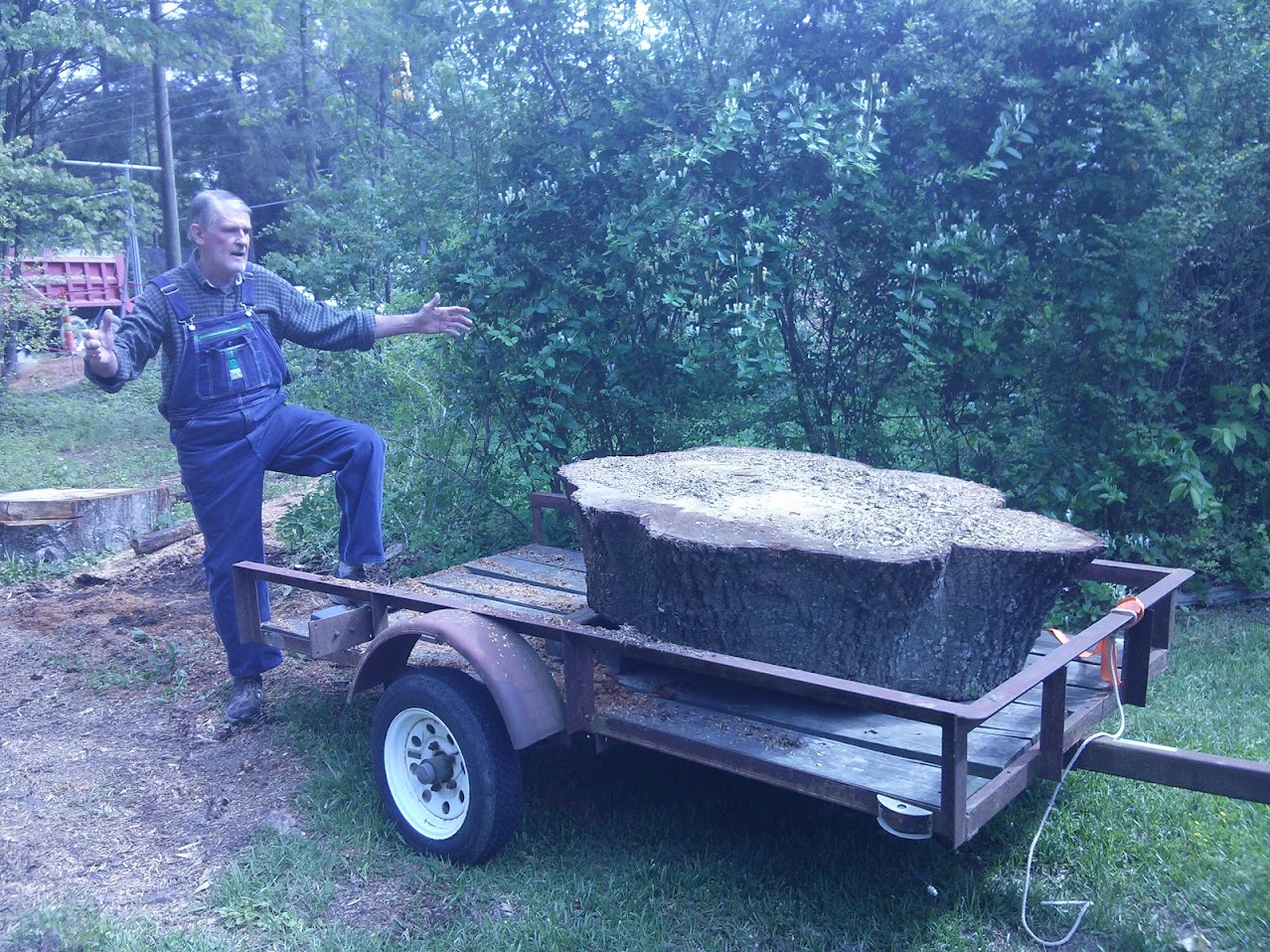 Fortune smiled upon us this day. There was a construction crew for a town side walk project literally in front of the property that had the oak slabs. $20 to the driver of the loader and less than 5 minutes later there was 700 lbs of oak on the trailer. It would have been be an entertaining challenge to get the slab loaded without hydraulic help, but it was already starting to get uncomfortably warm outside. 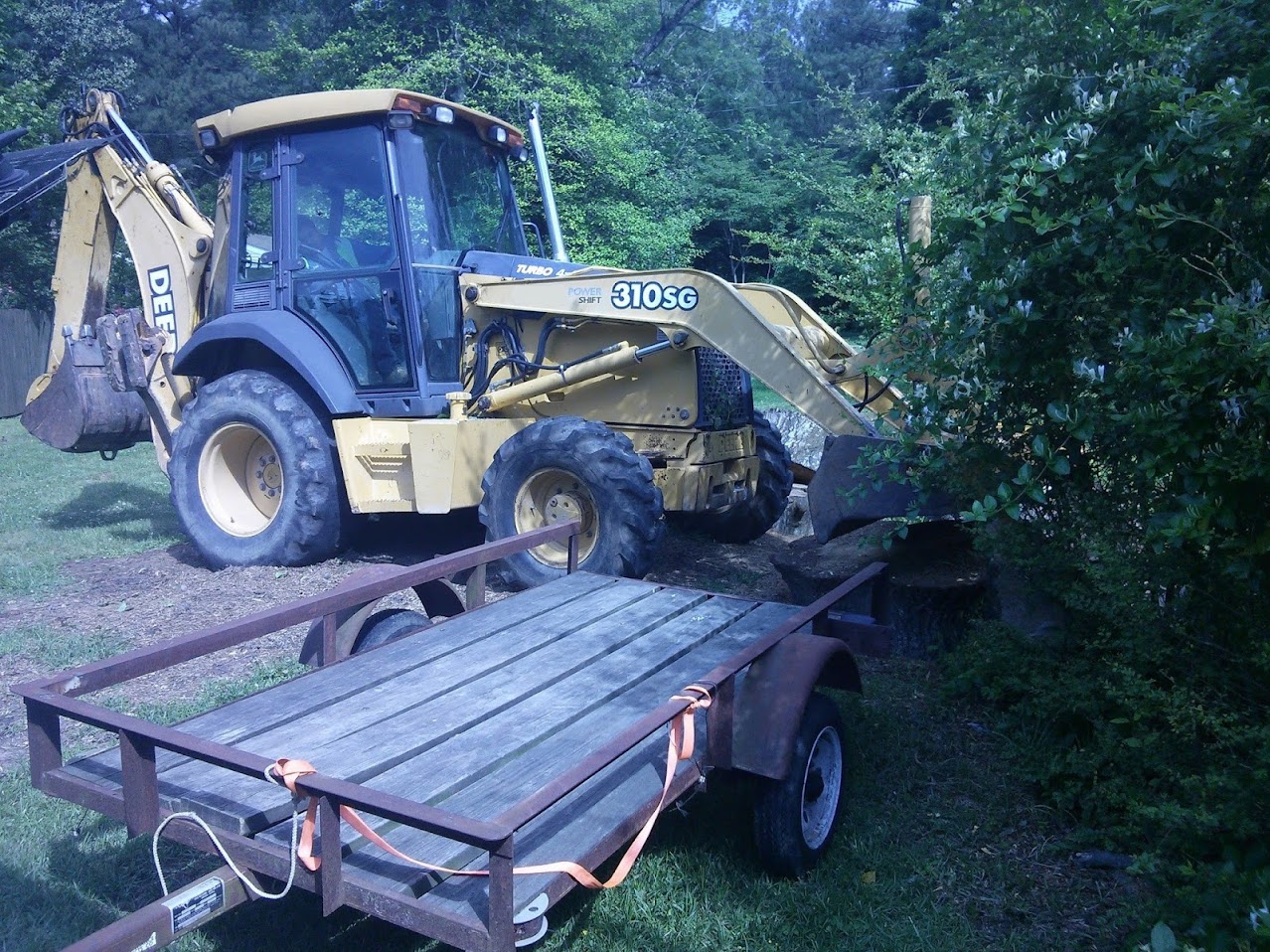 With the slab on the trailer, there was still the task of getting it back off the trailer. It would take a lot more than $20 to get the driver to follow me back home to put it on a pallet in my almost built garage. 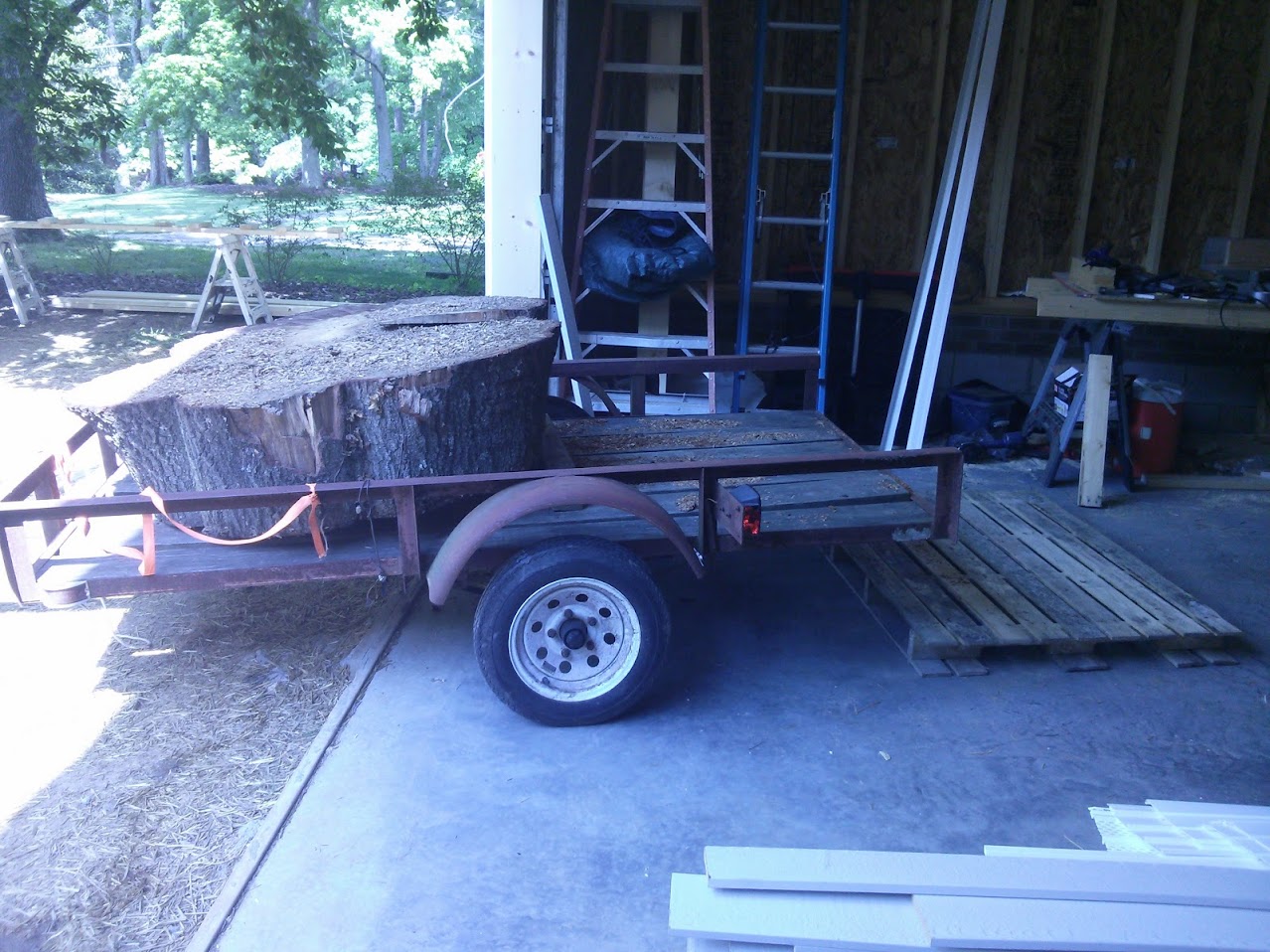 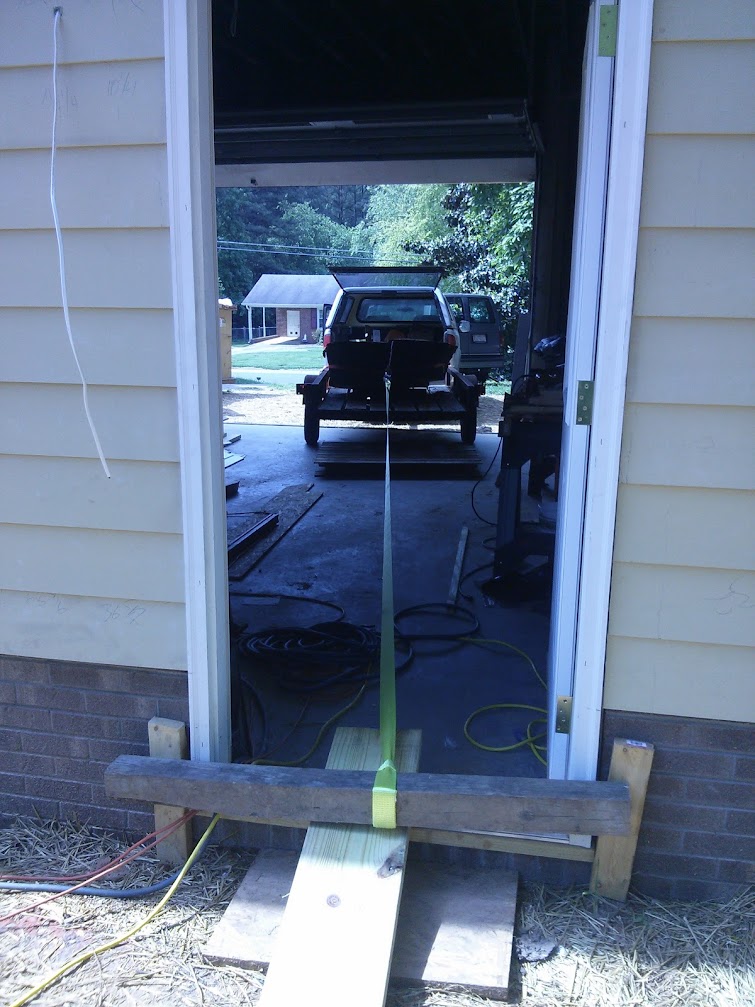 With gravity working with us, we used a come along and a tow strap anchored to garage's back door. We pulled it to the edge of the trailer and lined up the pallet under it. Then slowly drove the truck forward and the slab fell off on to the pallet. It's important to be aware of your surroundings and it would have been a bad thing had I not remembered the location of the garage door's eye sensor and dropped the slab 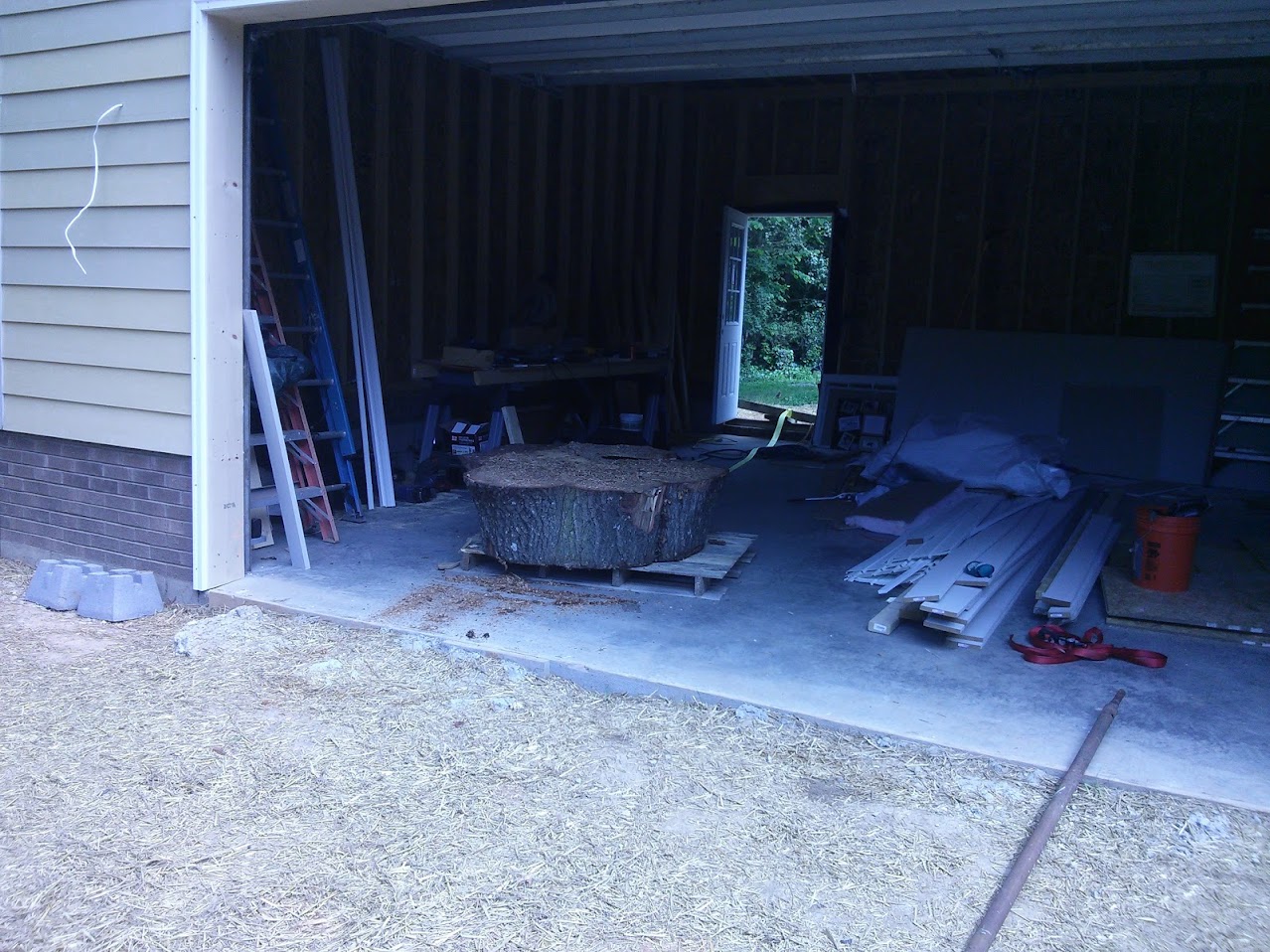 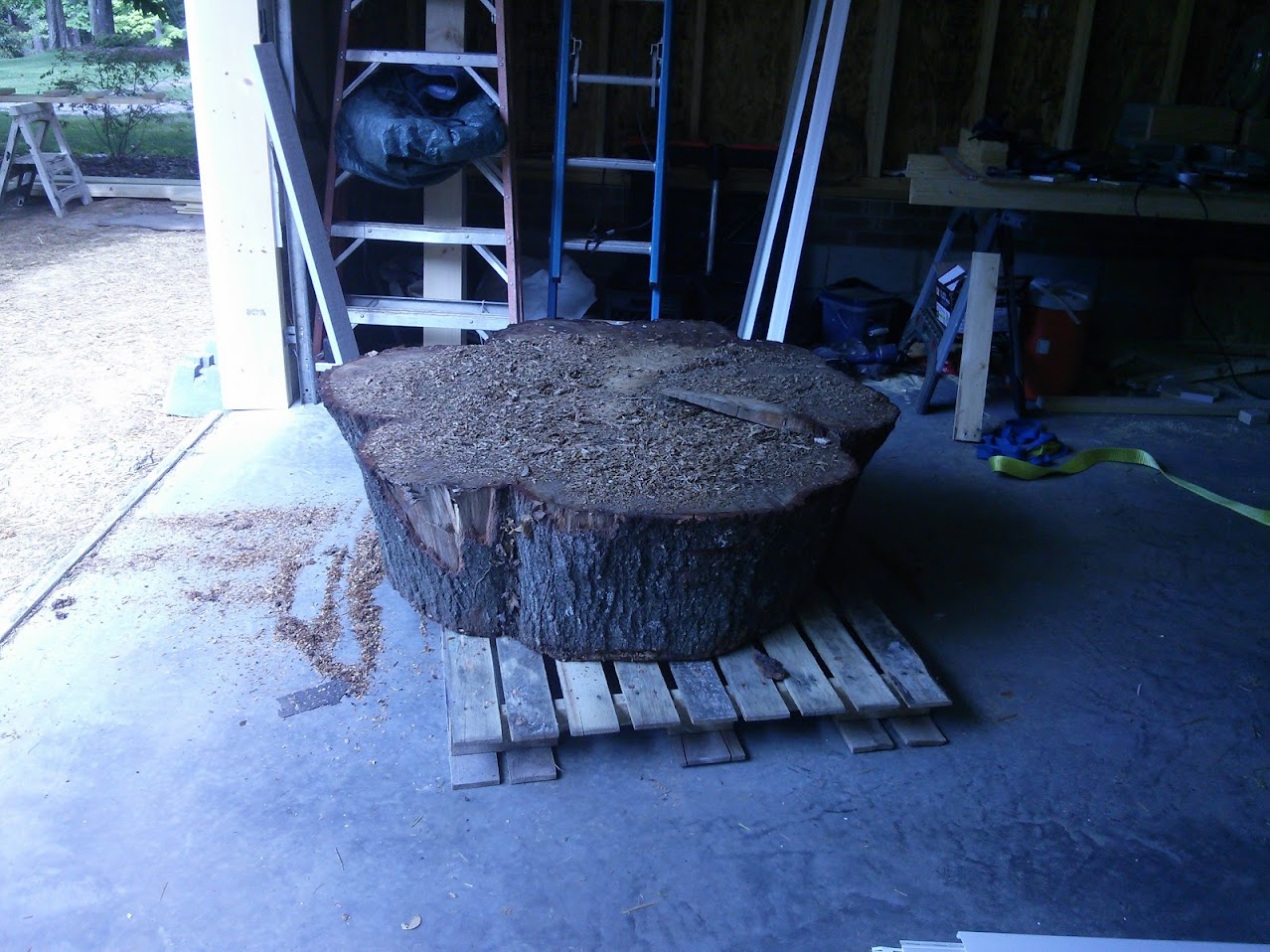 Mission accomplished! Yes? ... Not quite. The end grain needs to be sealed to help prevent checking. Sealing the top was easy. 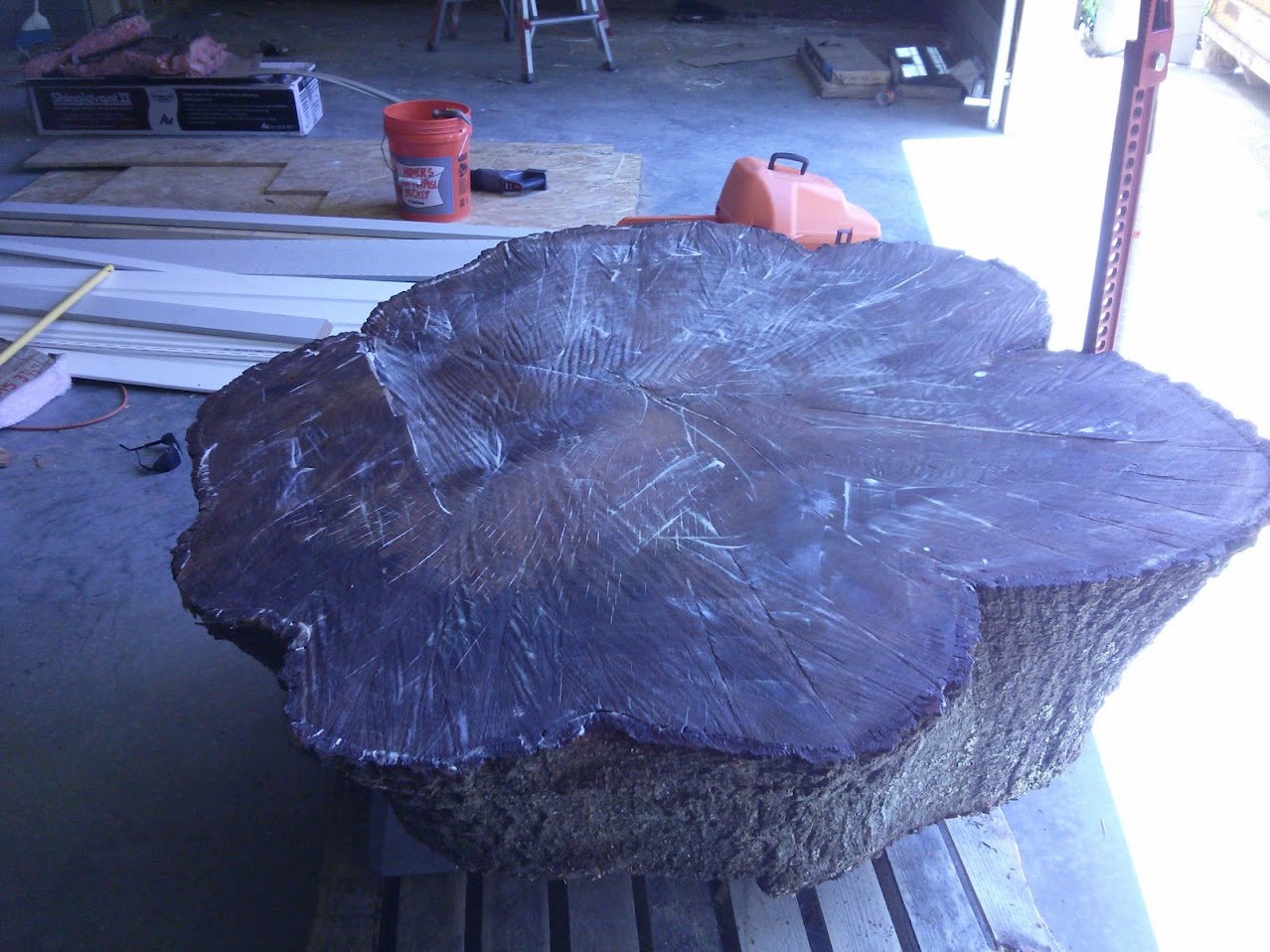 Sealing the bottom required a bit more effort. I bought a farm jack to help get the slab on to the trailer and to be completely honest... I've wanted one for a while and this project was an excuse to order it. It would be a shame if I didn't get to use the new toy on the project that justified its purpose. Sealing the bottom was its purpose. I had no intention of getting my arm stuck under the slab, so I had multiple sets of blocking in case the farm jack magically tipped over due to ground instability (the garage slab is only 2 months old, so it's still curing). 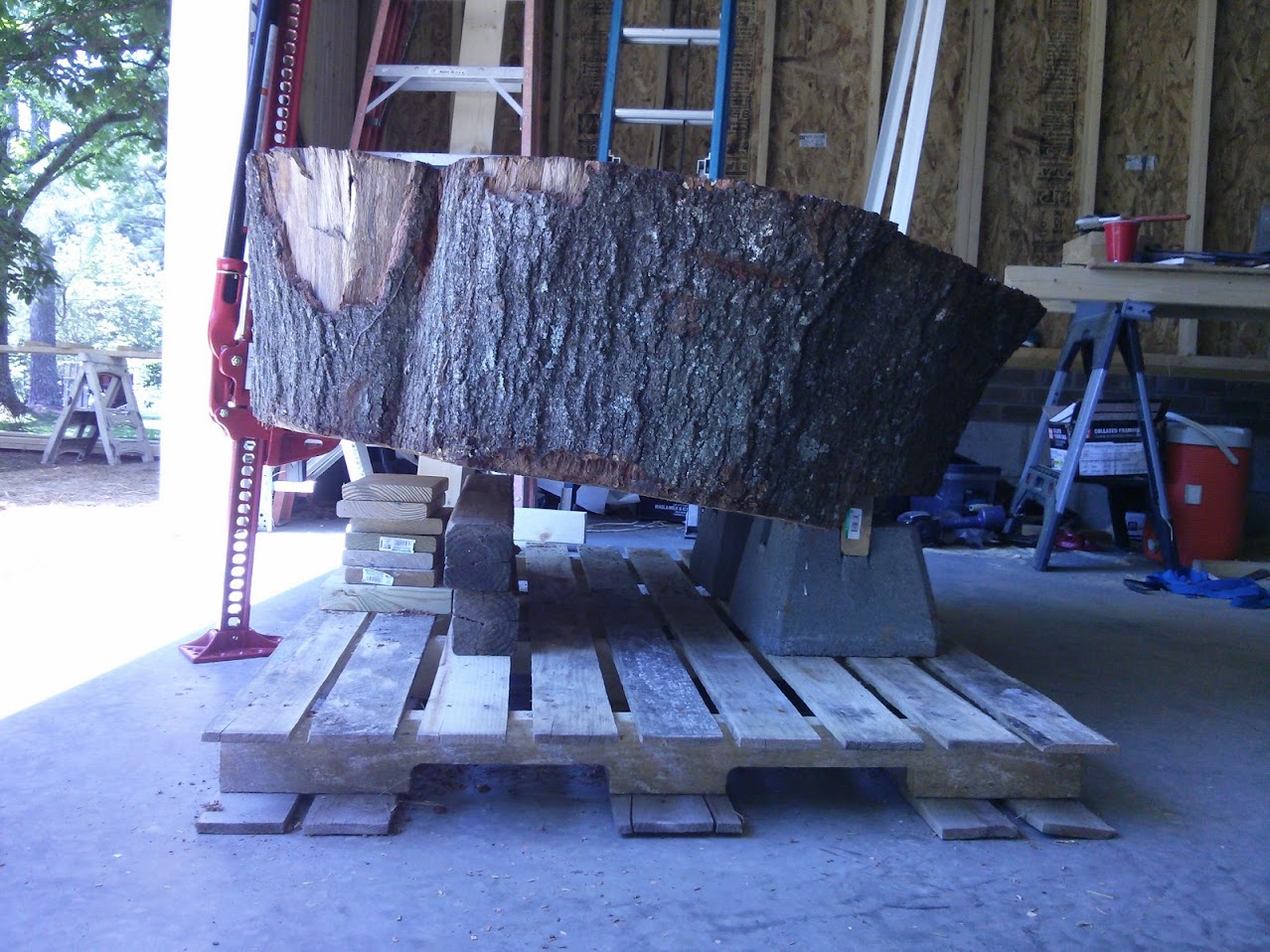 The oak slab in the garage will eventually (hopefully) yield at least one table top. I realized the table would need matching benches and the loader driver did say he would put more on to the trailer for me. Another 1/4 mile drive back to the oak tree memorial and I had a second, slightly smaller slab on the trailer. Naturally, I wanted the one on the bottom. 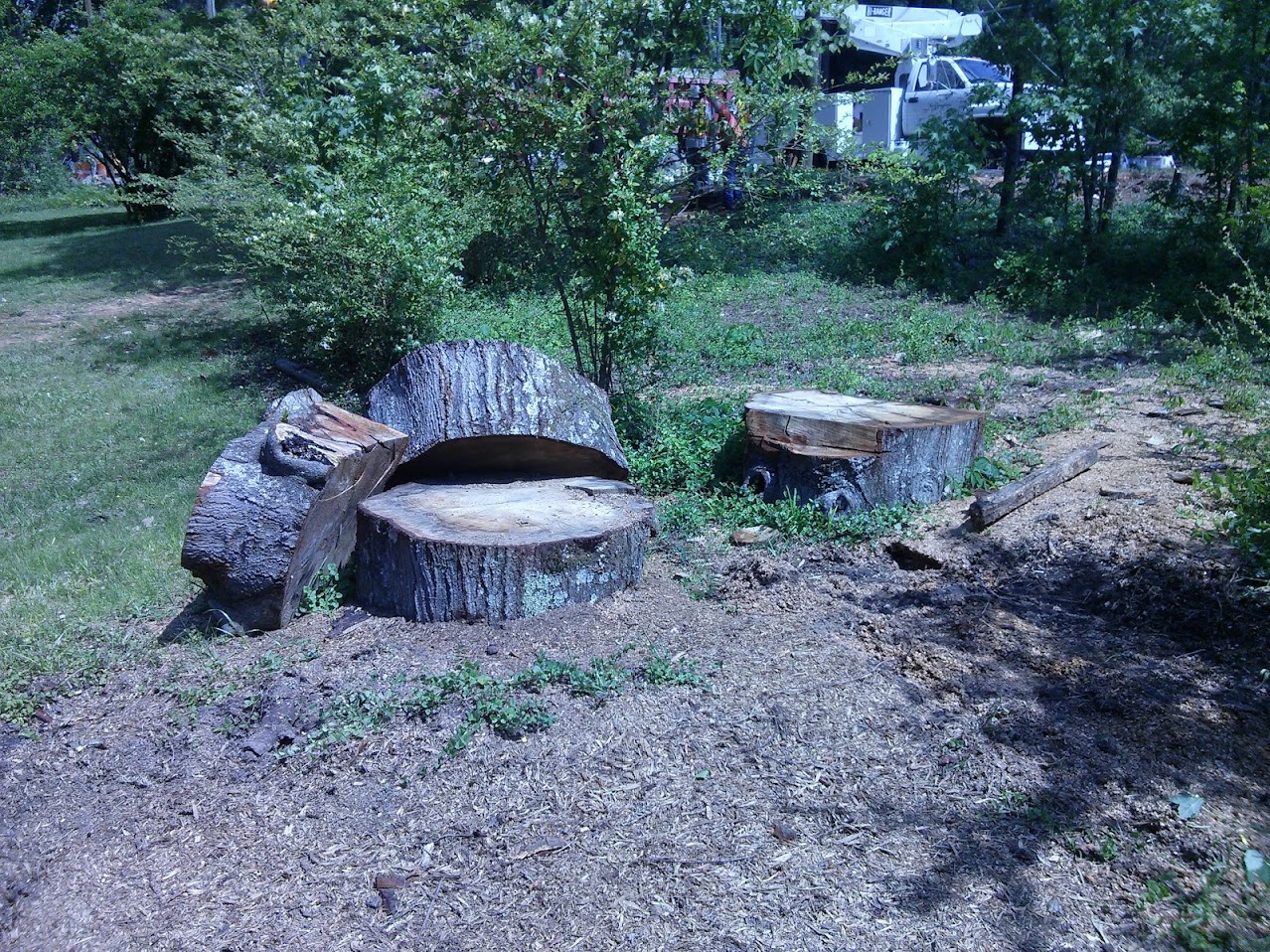 This slab was more centered on the trailer and was easily maneuvered by hand. Good thing because my ability to back up a trailer with a short tongue would earn me a D- at best. With the help of the garage builders, who lent me the trailer, the oak slab was easily rolled off (used 3/4" pipe from pipe clamps) on to the pallet that previously had the garage's hardi plank on it. 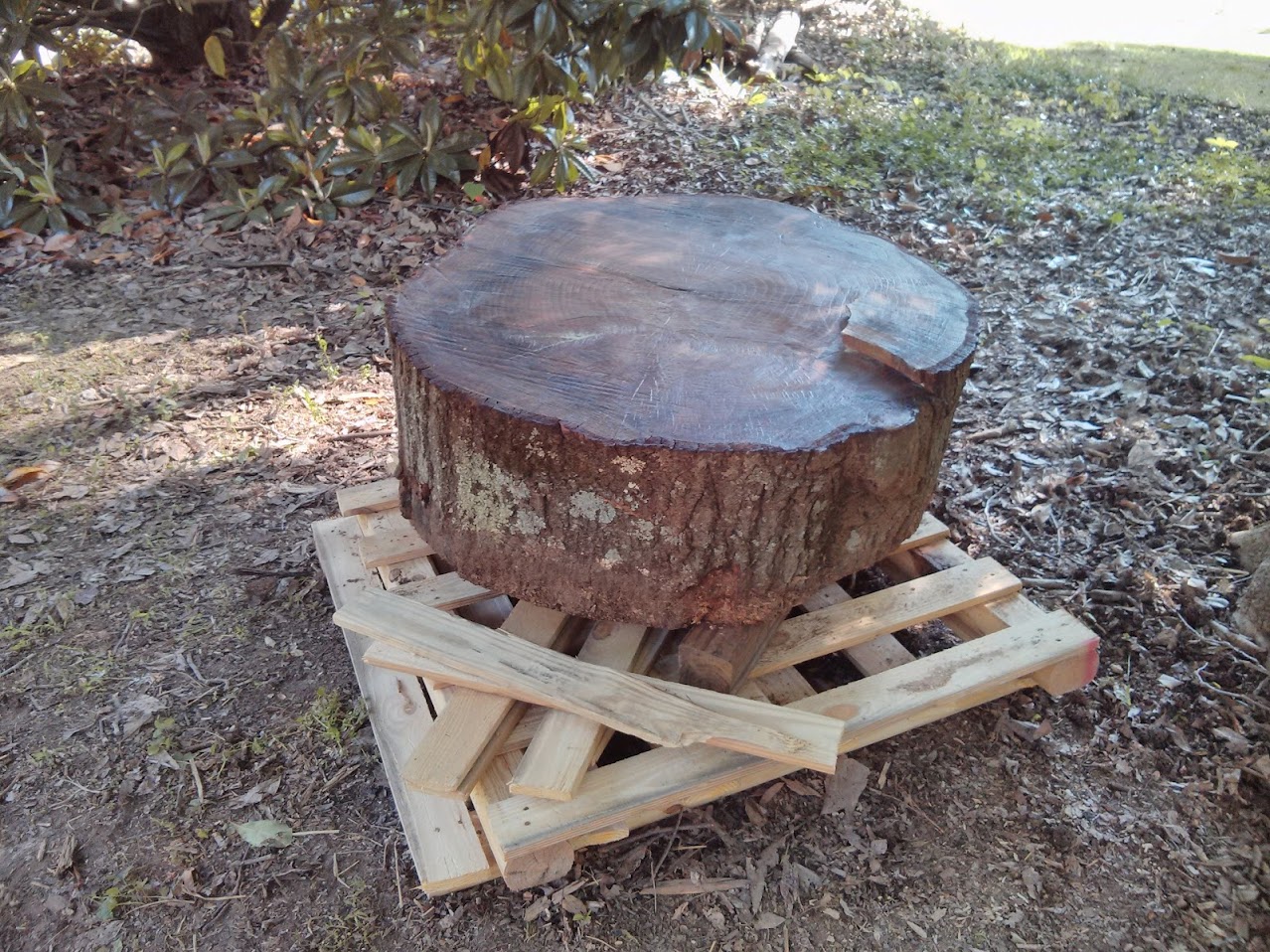 The next part of the saga will be to get these cut with either a two man saw, a larger chainsaw, or a trip to a sawmill.
Last edited: May 15, 2013
J

Jeff
Mike got every penny and then some out of that $20 yesterday. Fortune was indeed with us and we didn't get to test our non-hydraulic engineering strategies. No lost sleep over that missed opportunity.

He's presented a very nice chronicle of the adventure. Thanks. :icon_cheers

Here's a few more pics to complement his post. 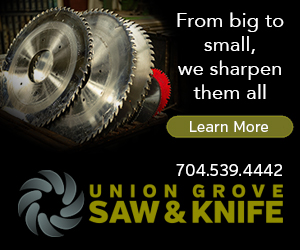