Jim
Staff member
Corporate Member
I posted last week about some tools I bought from an estate sale, one of which is a Dosch No. 4 Miter Trimmer. This weekend I spent my shop time cleaning and restoring this fine tool. It was already in good condition with mainly just surface rust. I disassembled the tool down to the individual parts and then began the cleanup process. I thought others might be interested in how this went.

My goto method for rust removal is electrolysis. I use a solution of 1 tbsp of borax in a gallon of water as the solution, and a battery charger to supply the current. Put the anode/positive/red on the sacrificial metal and the cathode/negative/black on the parts you want to clean. I usually leave them cleaning for about an hour. It doesn't hurt to leave them longer as the process stops when the rust is gone. Afterwards I take these out and use a steel or brass brush to clean off the surface iron that was previously rust. I used this method for all the small parts that would easily fit into my one-gallon bucket.

The main body of the trimmer was too big for my bucket. Rather than find a larger one I chose a different method for removing the rust on this part -- naval jelly. The process here is similar to paint stripper, apply and wait for it to work. I don't like this process as much for a couple of reasons. First, it's more work. You will likely have to repeat the process multiple times to get satisfactory results. The second reason is I find it "blues" the metal, similar to what gun bluing does. That said, it does work and I was able to get the trimmer base cleaned in about three applications, revealing an unexpected surprise -- etchings to mark 45, 60, 67.5 and 90 degrees.

Starting from top left, the bucked of dirty water is the electrolysis at work. You can see the reddish brown rust forming on the sacrificial piece and the black surface iron from the side with the parts. The foam is mostly oxygen bubbles (the hydrogen is probably well on it's way to the stratosphere by this point). Below this you can see the etched marks for adjusting the miters. To the right is a pair of the adjustment buttons before and after electrolysis. 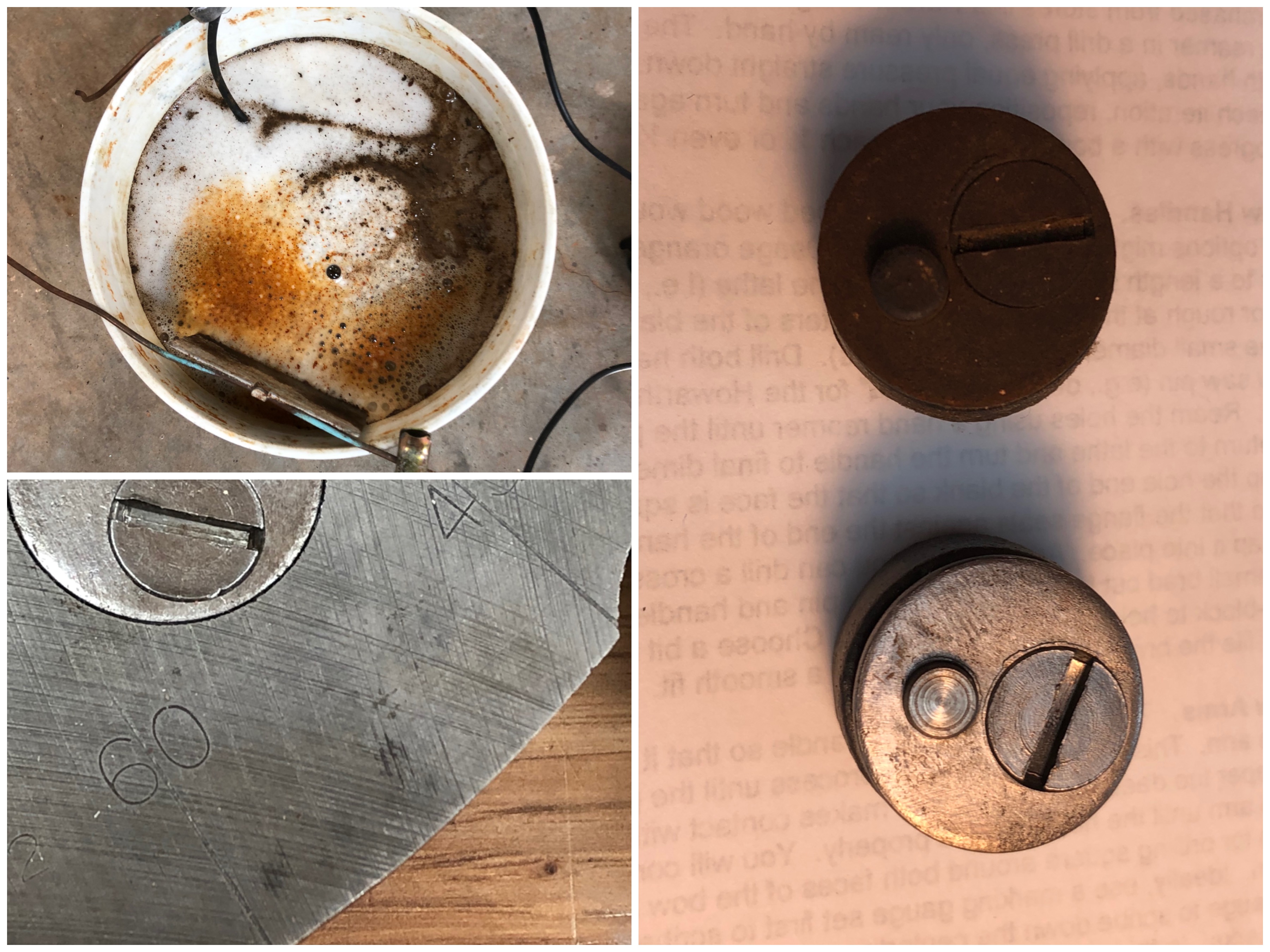 Once all the rust was gone I used a wire brush to aggressively remove any lose paint before priming. After the primer had dried I sprayed on a couple of coats of Rustoleum paint. The final gray is sort of drab but this most closely resembled the original color, so I went with that. While the paint was drying I decided to have a go at sharpening the blades. Originally I was going to send these out to be sharpened, but after some inspection they were in better shape than I realized. There were a few very small nicks that could be felt rather than seen. These cutters are a full 1/4" thick with about a 25 degree bevel, making for a lot of edge to sharpen. After about an hour on each one I had them bright as a mirror and able to shave the hair on my arm. 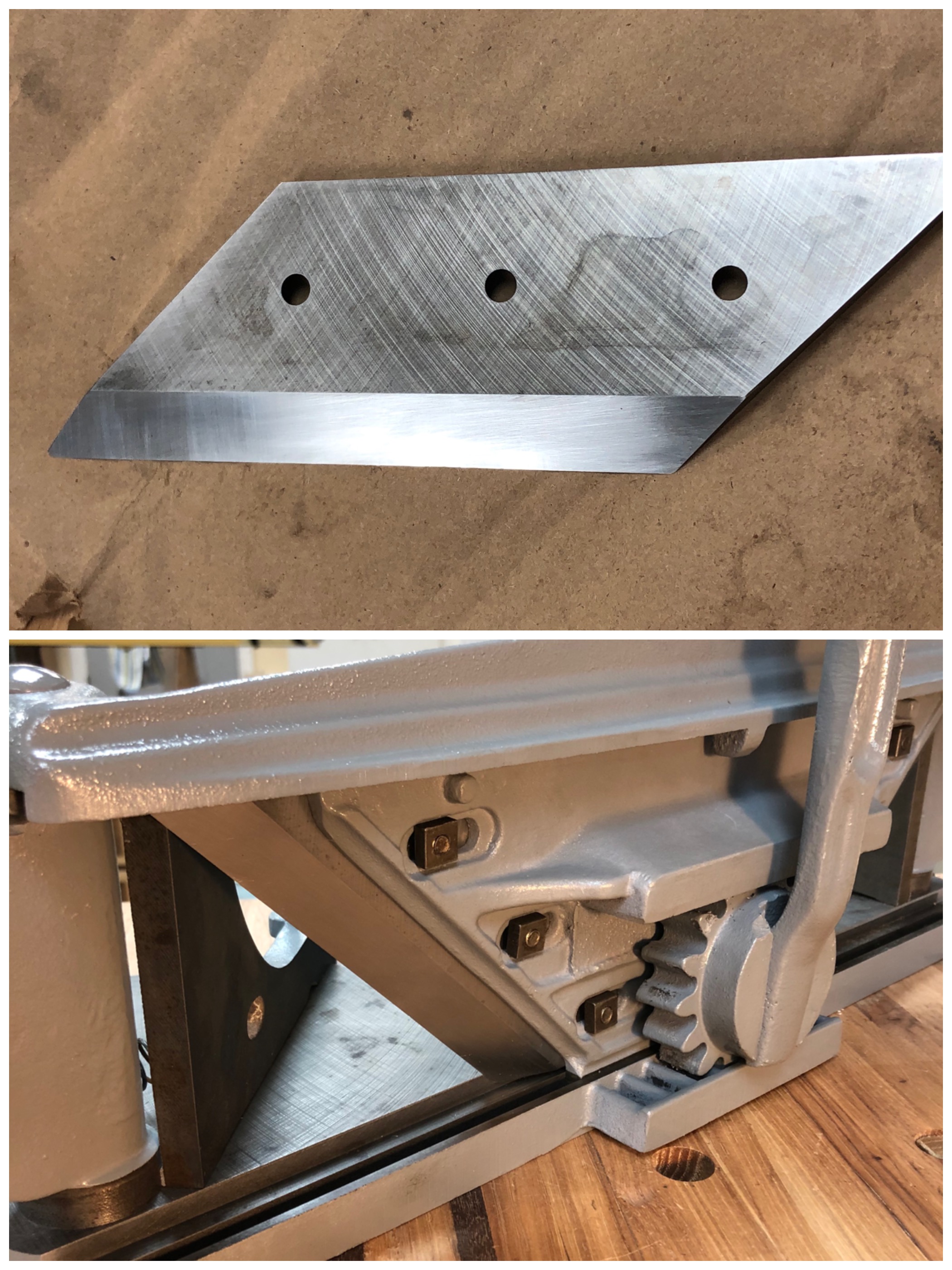 I reassembled all the parts and re-tuned the adjustments. It has automatic stops at 90 and 45 degrees on each side. This is a solid tool. I'm not certain when it was manufactured. It has a patent date of July 17, 1900 stamped on one of the wings. With the sharpened blades it takes a perfect slice with little effort, leaving a surface that is smooth as glass. I'm looking forward to using it. The precision and quality that went into making these old tools never ceases to amaze me.

Final shot is before and after cleanup. 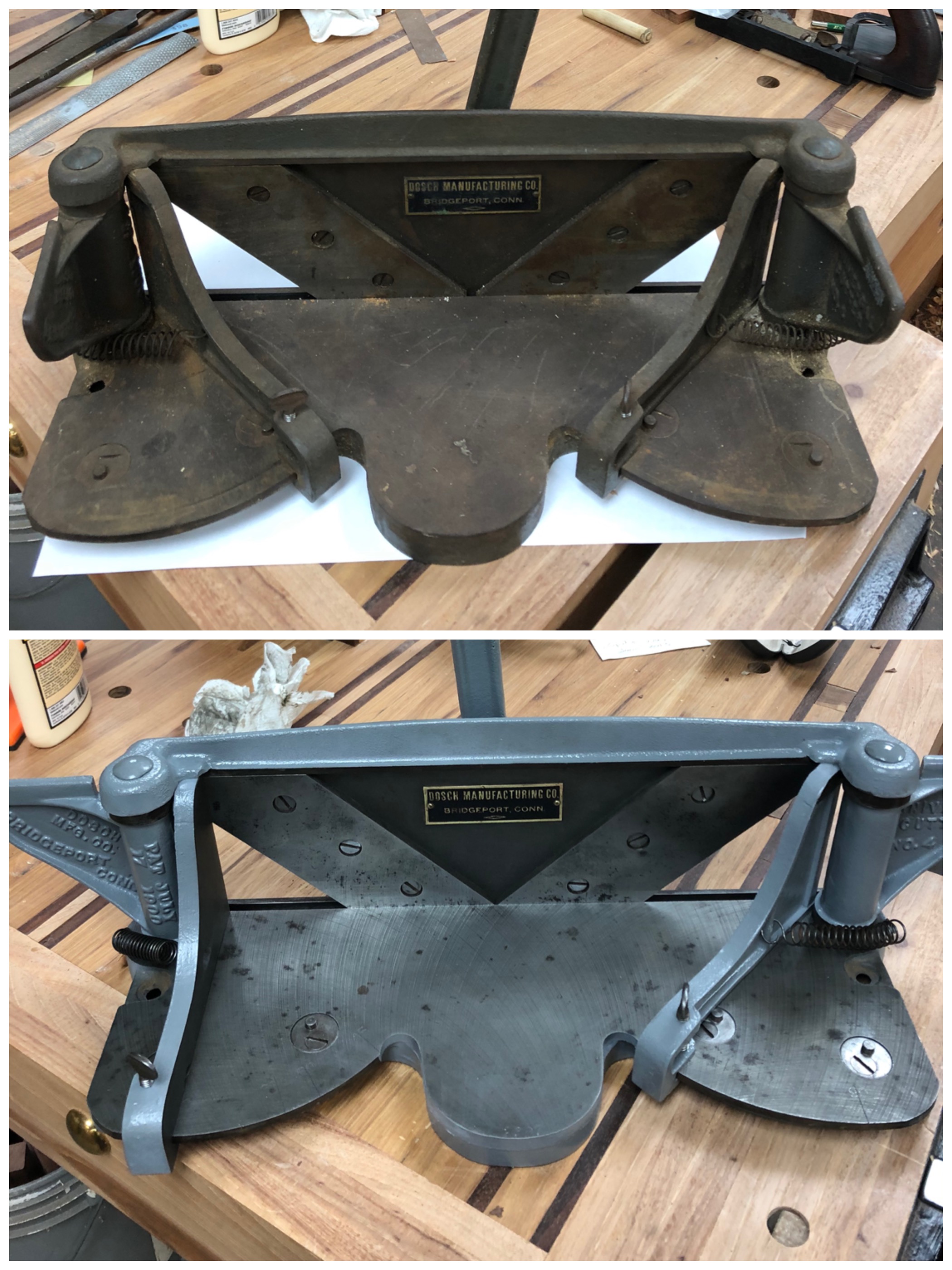