Scott
User
Thought I would make a thread to post some of the progress shots from the rabbet plane I am making. It's a 3/4" rabbet plane with the iron bedded straight, I'm mostly following Caleb James' plans. It is bedded at 55* which I am suspecting is going to be a little bit much for aggressive cutting but we will see. I think 50 degrees was more common historically. The wood is quartersawn hard maple. No boxing on this one.

The blank gets squared up and marked out first. The escapement is drilled with a forstner bit, then I saw the bed and breast lines using a sawing guide. The wear angle and the bed are then pared with a chisel using a guide clamped to the blank. I used the drill press jig from this thread to drill out the mortise. At that point I got some wedge stock ready and cut it into two wedge blanks. The less clear half becomes the temporary wedge, which has a 10* angle and is used for fitting, and then will also serve to back up the escapement when I start carving it (since otherwise it could break out where the wedge mortise is.) So it will get marked up pretty badly, in fact I may chop off the end so I can pare clean from one side of the blank to the other.

Today's progress was floating the mortise and getting the temporary wedge fit. I don't know how long that took, probably easily 2-3 hours, but it is the first mortise I have floated. I will admit I "cheated" a little, I was gifted some Iwasaki floats for my birthday. I still haven't woken up one day and decided I wanted to file 40 teeth into the side float blank I started, so for this one I just used the Iwasaki float for the sides. I'm not sure yet if the Iwasaki side float is long enough for side escapement planes but they worked for this one.

There is a slight gap on the sides (1/64 or something) where the wedge emerges into the escapement that allows it to wiggle from the pointed end, but it doesn't wiggle from the actual top side so I am hoping that is sufficient for now.

The big parts that remain are carving the conical escapement and making + hardening the iron. After that it is just doing the chamfers and gouge cuts and flattening the sole on glass.

John
Corporate Member
Looking like your well on your way to a nice plane. I took a class from John Wilson several years ago and made one. Besides making the plane we formed and hardened the iron. 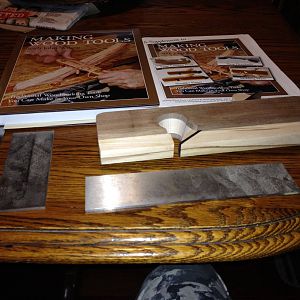 gesiak said:
Looking like your well on your way to a nice plane. I took a class from John Wilson several years ago and made one. Besides making the plane we formed and hardened the iron.
Click to expand...

That looks very nice! Do you recall how you shaped the escapement? It looks very consistent.
S

Scott
User
Carved the escapement out.

Scott H said:
That looks very nice! Do you recall how you shaped the escapement? It looks very consistent.
Click to expand...

Scott; sorry it took a couple of days to respond. If I remember correctly. using the center of the 1" hole that was shown in the plan, I drew a line at right angles from the throat opening, a line parallel to the sole and 1/2" above the side piece edge, then 1/4" back toward the blade for the hole center. Before drilling the 1" hole, I drew a 1 1/2" circle from this point to guide sawing the flair around this hole. To cut the flair, cut up from the sole following the vertical line drawn on the fore block. Then use a coping saw make an angled cut following the 1 1/2" circled penciled around the hole. I then used a wood rasp to finish it off.

I recommend you invest in John Wilson's Making Wood Tools 2nd Edition. It also has a section on shaping and hardening the iron.
Last edited: Sep 30, 2021
S

Scott
User
Thank you @gesiak! I will add the book to my shopping list.
S

Scott
User
Rough cut the blade out of the O1 using a hacksaw. It definitely took quite a while. I was feeling iffy about how to support the tang, which is only 3/16" wide, and keep it from vibrating like a diving board if I were to cut it with an angle grinder.

Next up is grinding to the layout lines and doing the taper, rough bevel, relief angles on the blade sides, etc.

Scott
User
I got the iron shaped to the layout lines (well, as close as I can get it and still see my lines.)

Best of luck with your plane.
S

Best of luck with your plane.
Click to expand...

Wow, thank you! I could not think of a better example to take measurements off of.
S

Scott
User
I ground the taper on the blade using my 1x30 belt sander jig and then lapped it on 120 grit sandpaper using this sort of holder that has "ramps" on the side with approximately the right taper. Wish I had had some 80 grit in this width. I kind of forgot that the sandpaper and blue tape has thickness, and I didn't really run the thing until the paper actually stopped cutting which would have been correct, but somehow I ended up with basically exactly my goal (1/8" one end, 1/16" on one end) within a few thou. More importantly than that, I ended up with the faces very parallel to each other. I think the blade holder I used while lapping on the 120 grit helps keep the rocking down within some "acceptable threshold" even though I didn't work it until the runners made 100% contact. I lapped the "bit" up to 400 just to get it pretty flat while it is still soft.

Still a pretty labor intensive way of making a tapered blade, but the results are better than my first tapered blade which ended up with noticeably non parallel faces.

P.S. The way I fine tuned the runners on the blade holder was to put a ruler across both runners, perpendicular to them, and try to slip a gauge block or something of known thickness underneath the ruler, close to the left runner and then the right runner. I used a 1/8" thick brass setup block as my gauge on one end, and the end of the tang on the other. (I don't have any 1/16th setup blocks.) If the gauge block feels like it 'catches' the same way on the left and right side, you should be pretty close to having correctly shaped ramps.

Scott
User
Some satisfying progress today -- Got the wedge and body all complete and ready for finish.

Still need to tweak the iron a little, and harden and sharpen it. And apply finish. I am planning on doing danish oil and wax (on the outside only)

Scott H said:
Some satisfying progress today -- Got the wedge and body all complete and ready for finish.

Still need to tweak the iron a little, and harden and sharpen it. And apply finish. I am planning on doing danish oil and wax (on the outside only)
Click to expand...

Robert
User
Scott the plane looks fabulous. Believe it or not, Larry told me he uses minwax antique oil finish on his planes.

Scott
User
Thanks everyone. I put some watco danish oil on it last night and it is looking nice. I don't want to touch it right now to stage a photo but I will post one eventually.

I have heard that Larry Williams uses minwax antique oil, I wonder what the benefits of it are.

I haven't finished my other planes, and I feel like I have to either be careful about leaving dirty fingerprints on them or just give up on the cosmetics altogether. This is going to be a test to see how oil and wax holds up.

Jim
Staff member
Corporate Member
For future reference in case you get tired of tapering your own irons: https://redrosereproductions.com/tools/Tapered-Molding-Plane-Irons-c120607553. Red Rose Productions has decided to offer tapered irons since Lie Nielsen seems to be offline these days. Prices seem reasonable.
You must log in or register to reply here.
Share:
Facebook Twitter Reddit Pinterest Tumblr WhatsApp Email Share Link