Michael
Corporate Member
This contest will run with a twist. If you have pictures, that's preferred. But, there must be a back story! Best back story wins this one! We'll let this one run through the end of May anyway, possibly longer.

Michael
Corporate Member
<<<UPDATE June 2nd>>> So maybe this one was a bad idea? or did nobody see this contest? Let me know either way so I can best understand if I should extend or close this one as a "bad idea" and start a new contest!

TENdriver
First time I have seen this.

Richard
Staff member
Corporate Member
Yep, I missed this one, heck just extend and reboot it I've got one for it!

Gene
Staff member
Corporate Member
I saw it and forgot the deadline. I did/do have something to submit.

Michael
Corporate Member
OK, we're going to let this contest go through the end of June and see what we have by then!

Berta
Corporate Member
The backstory: In Ohio there is a State Park with a lake, much like Jordan Lake here. We grew up going there, our kids grew up swimming and fishing there. When we were preparing our house for selling so we could move here I took pictures of our favorite spots. There was this frame pattern in one of the magazines. It was hard, many do overs, it’s not perfect (black paint) but I did get it done. 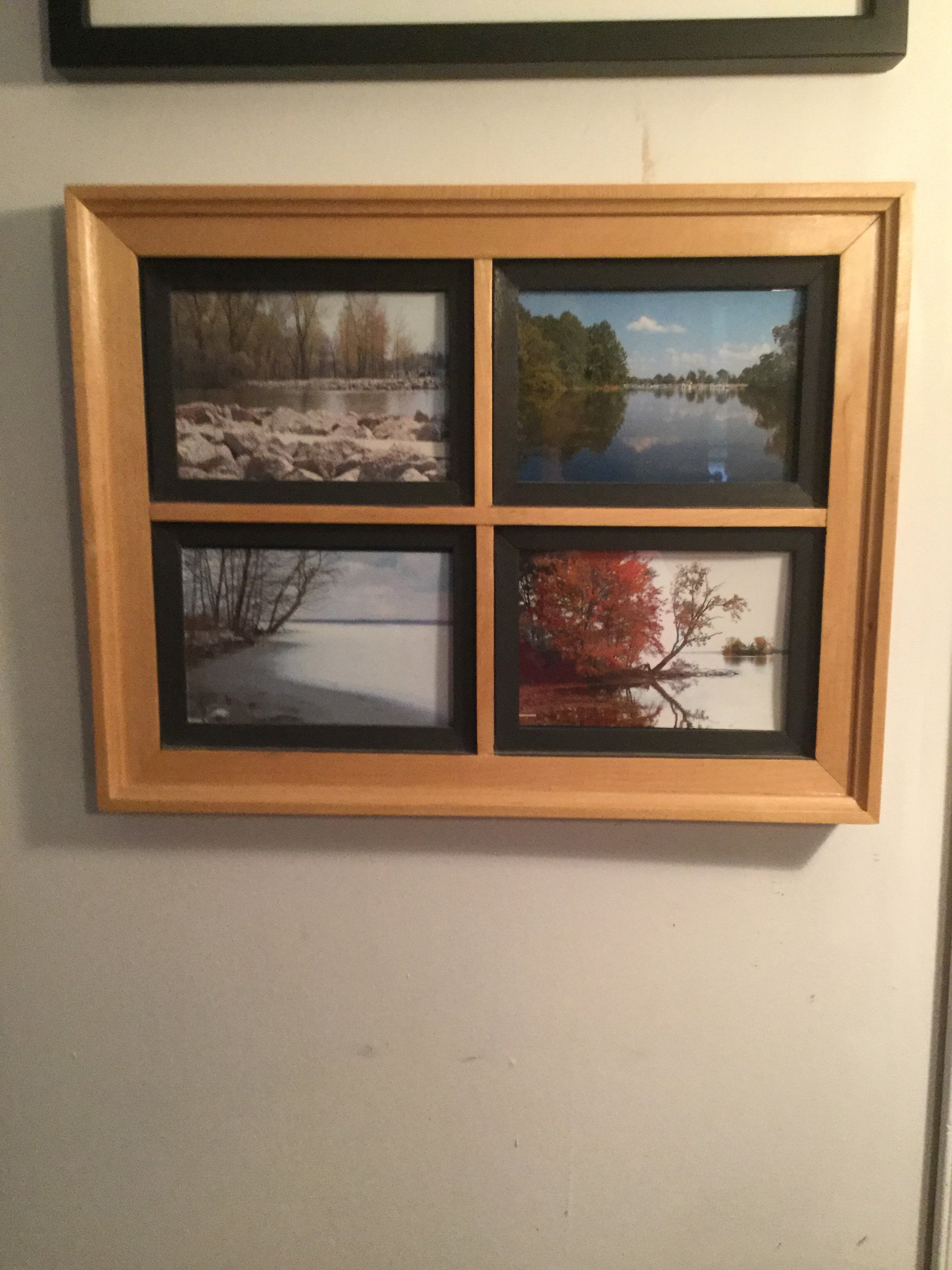 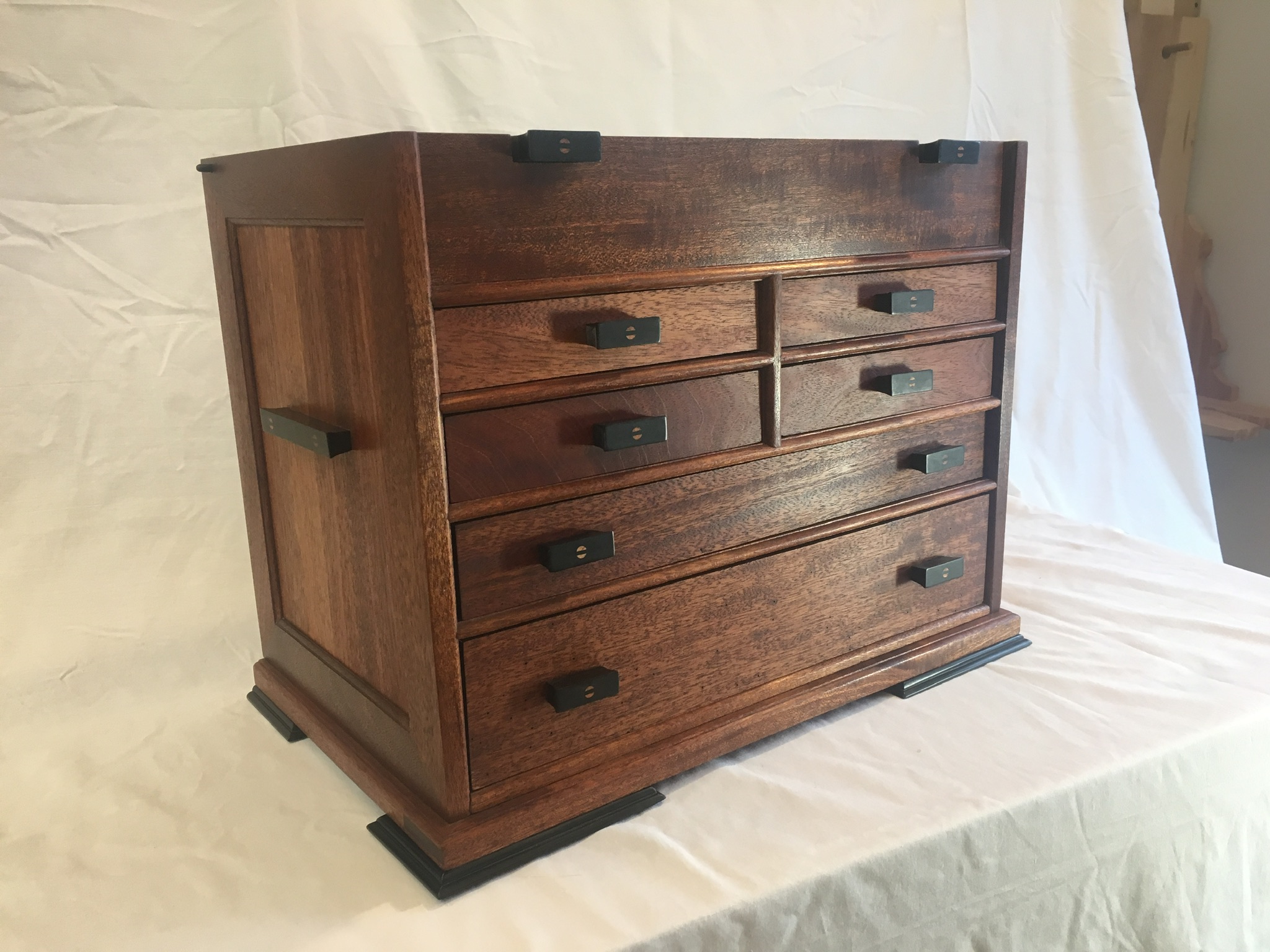 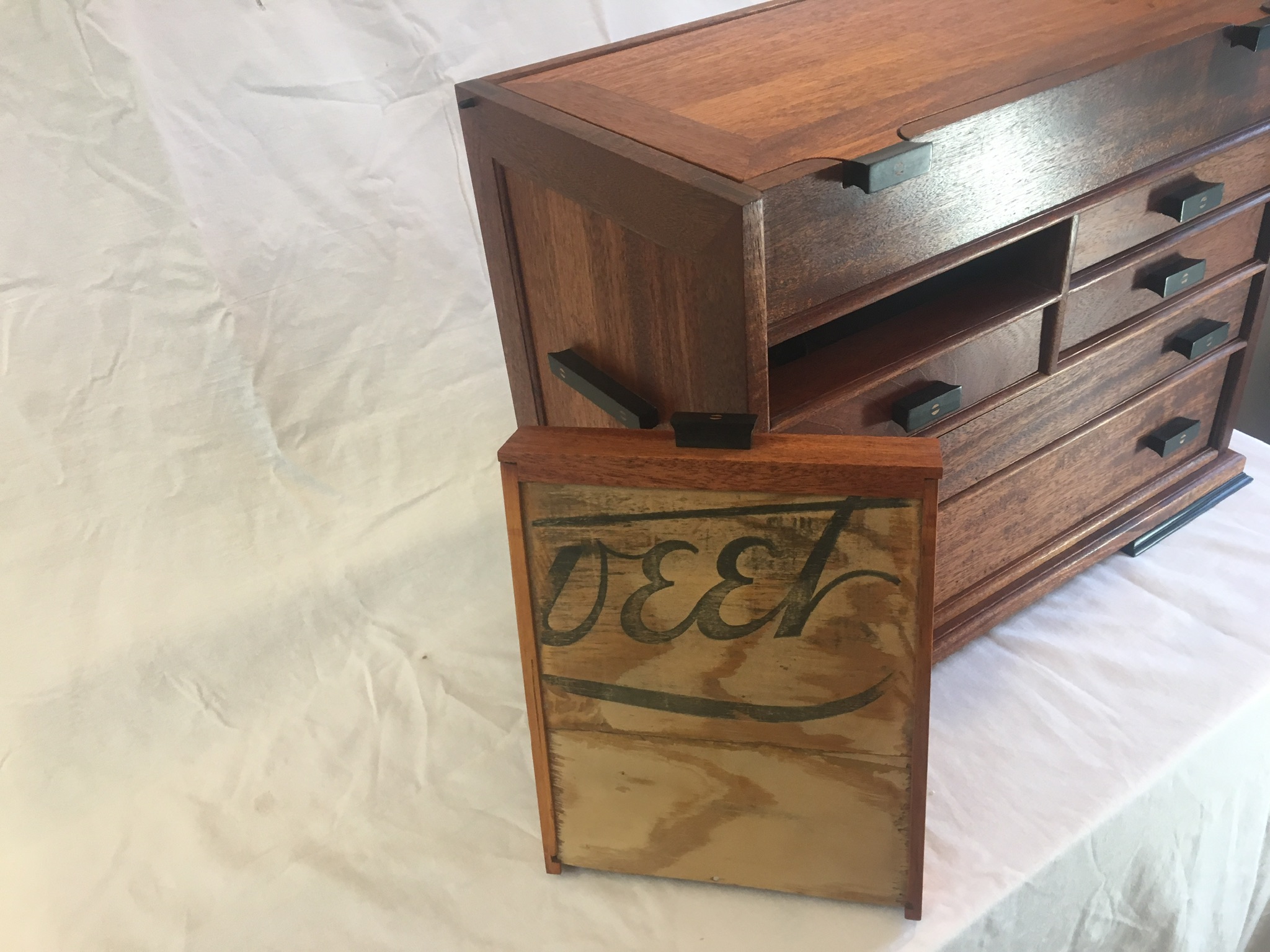 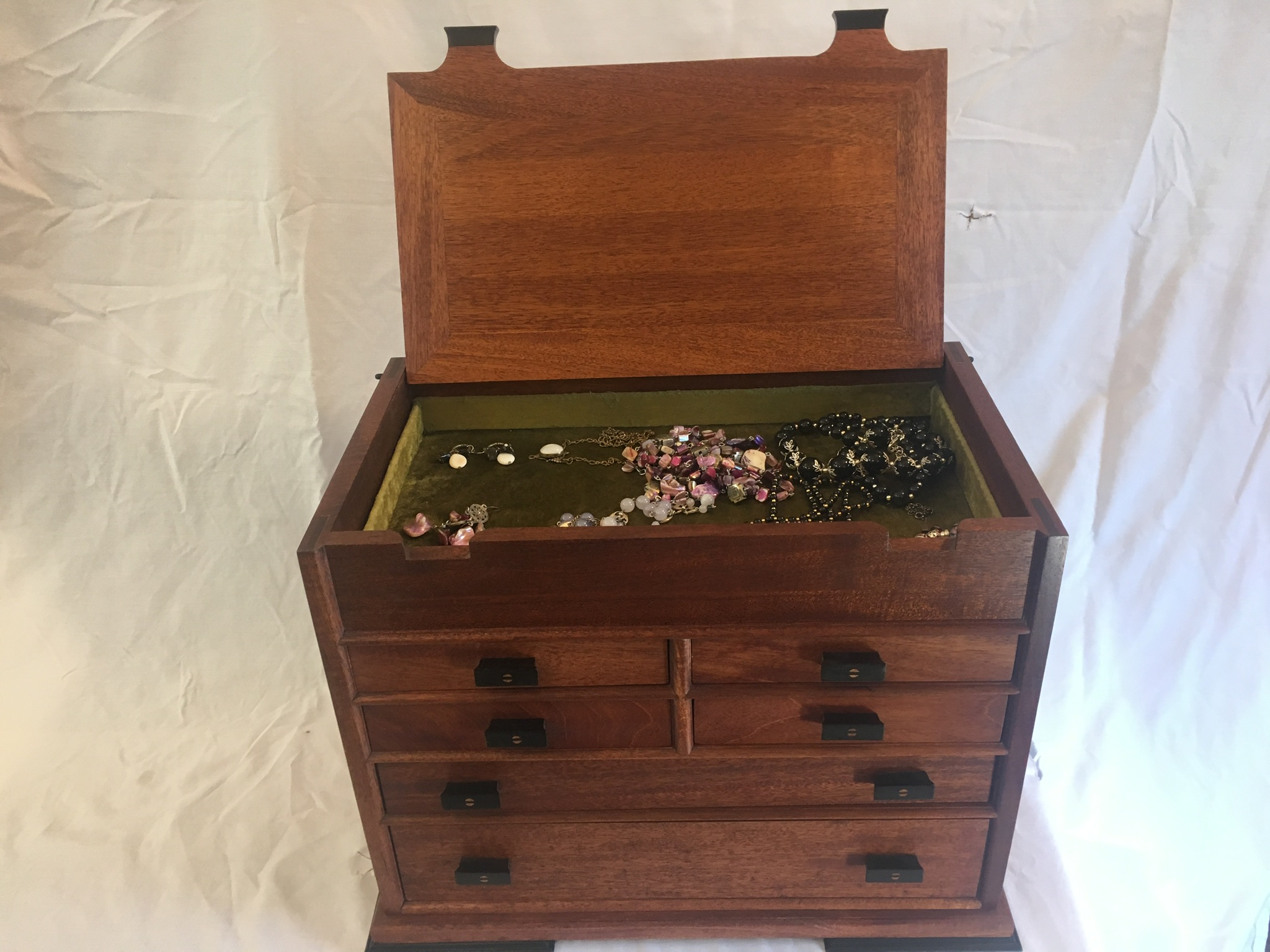 James
Corporate Member
Commissioned set of 2 bowls, 3 yarn bowls, and 4 pens made earlier this year. Met the client at her farm where she had several large pieces of walnut that came from her family property in Florida that had been cut down over a decade ago. She has pictures of her as a kid with family climbing in the tree, and wanted a way to give a piece of that memory to her relatives. She gave them to her cousins, aunts, and uncles that shared memories of the tree and the property.

Steve
Corporate Member
This is a bookcase that I made for my son's first grade teacher in 2015. She went well beyond her normal duties as a teacher to help my son. I gave this to her after the year was over. When she saw it, she cried and said that she did not have any solid wood furniture. I used the scroll saw to cut out her favorite saying and placed it on the top back. The saying is from Mother Teresa "Spread love everywhere you go. Let no one ever come to you without leaving happier."

This is made of solid red oak. The empty spaces on the sides were created for pictures.

I enjoyed making this, but the look on the teacher's face was priceless. 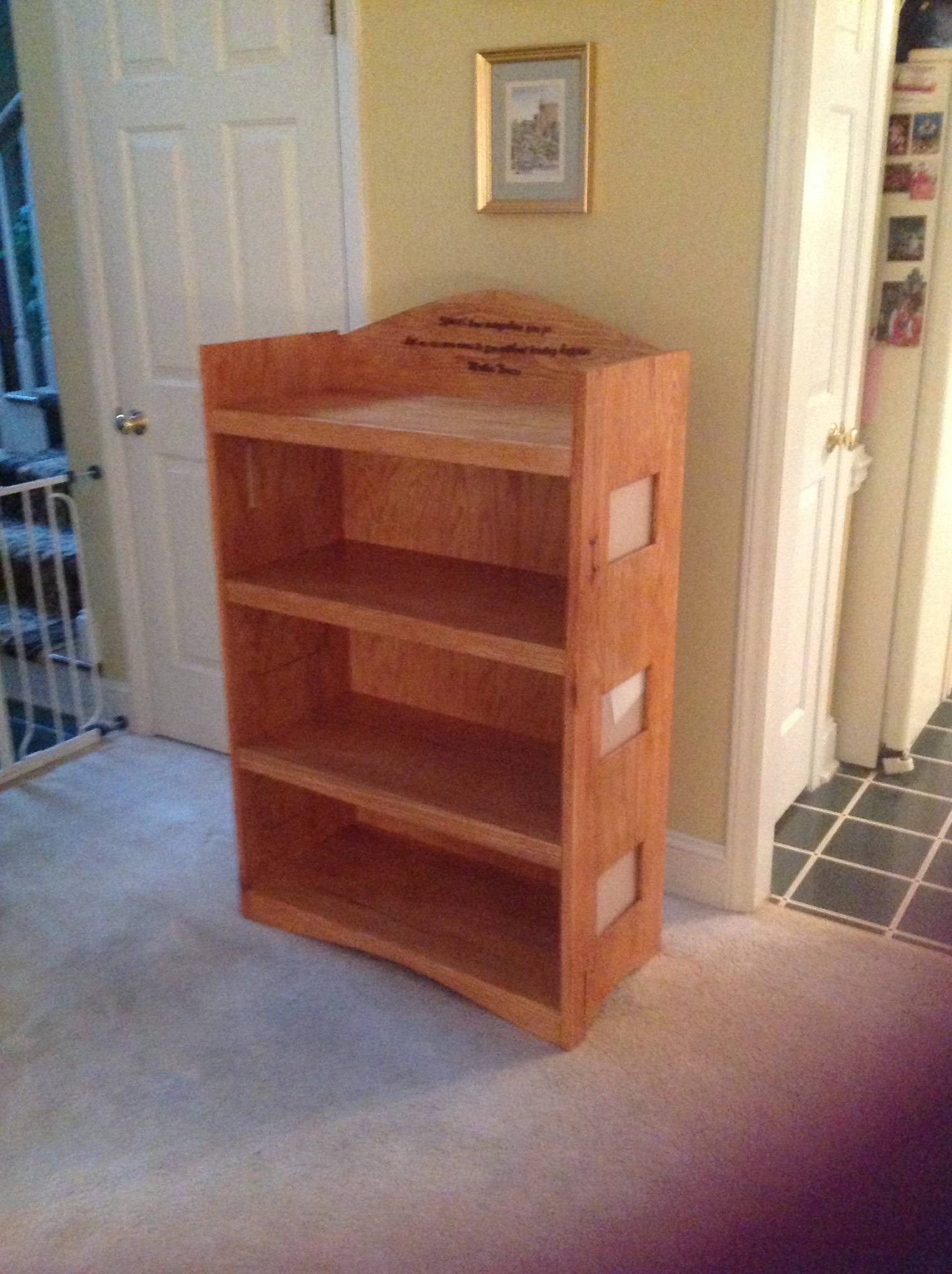 The teacher continues to be a part of my son’s life.
D

Gene
Staff member
Corporate Member
In March 2013, the ECU Board of Trustees approved a plan to build a new student center on the main campus, about a block from my office. When the construction office trailers rolled in, site preparations were underway. As you know one of the first steps of site preps is tree removal. I managed to track down the site manager for TA Loving, a prime contractor for the new structure, and asked if I might have some of the tree parts. I filled the pick up with two loads of what I thought would be manageable logs, i.e., bowl blank contributors. I was fortunate to be on site when two trees were felled. The contractor was very supportive and let me cherry pick pieces that I wanted. It was all oak.

I believe the logs sections were at my house for a week before I was able to process them for storage. I cut up the logs into pieces that I could store readily in my garage-not in my shop. If they had been stored in my shop, I would not have had much room to work. It was obvious really quick that the logs had been on the ground just long enough for stuff to happen. You could hear the bark beetles, you could smell the spalting. Trust me, this wasn’t the smell of fresh cut oak. This was the smell of mold and mildew. Keep in mind that 90% of the time the garage door is down. The only time it is open is when the car/truck go in or out. Not much air transfer and a lot of residual engine heat.

And time moved on. It was probably 9 months before for I touched a gouge to the ECU oak. This was really the rebirth of a high school turning experience save for a few pens that I had made since moving to NC. I started with a Rigid tube lathe that I had gifted to my FIL who returned it to me when he moved into a retirement community. In 2016, the Robust arrived and now I had to justify its presence for something other than an investment vehicle. I turned a few platters and a couple of bowls from some of the ECU oak on the new machine and realized that the integrity of the wood was rapidly slipping away 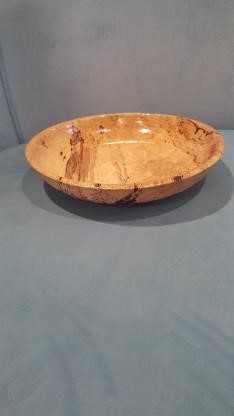 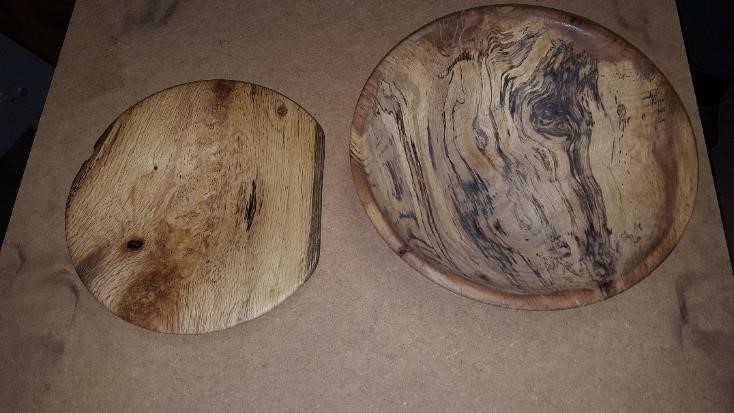 In 2018, ECU Engineering celebrated its first graduating class (2008) with a 10-year reunion. As planning committee chair, I wanted to commemorate this occasion with something special. Why not a nice bowl from some of the ECU oak. Two things conspired to drive this forward: 1) I found a piece of the oak that was reasonably solid, and 2) I led the design for a commemorative challenge coin to celebrate the event. Those two things were combined in what I named “Coin Bowl”. Coin Bowl is about 10” in diameter, 3.5” deep with a 3/8” nominal wall thickness. I mounted the coin at the bottom of the bowl by gluing it only at the edges where in contacted the long grain. Coin Bowl was on display at the reunion with a sign that read: “Not for Sale” and “Do Not Touch”. The reunion was a success. We raised over $30,000 for what is now an endowed alumni scholarship. Okay, really not much for you NCSU engineering grads with a program that has been around for zillions of years. Still, at ECU we were proud, and we’re good
at baseball. 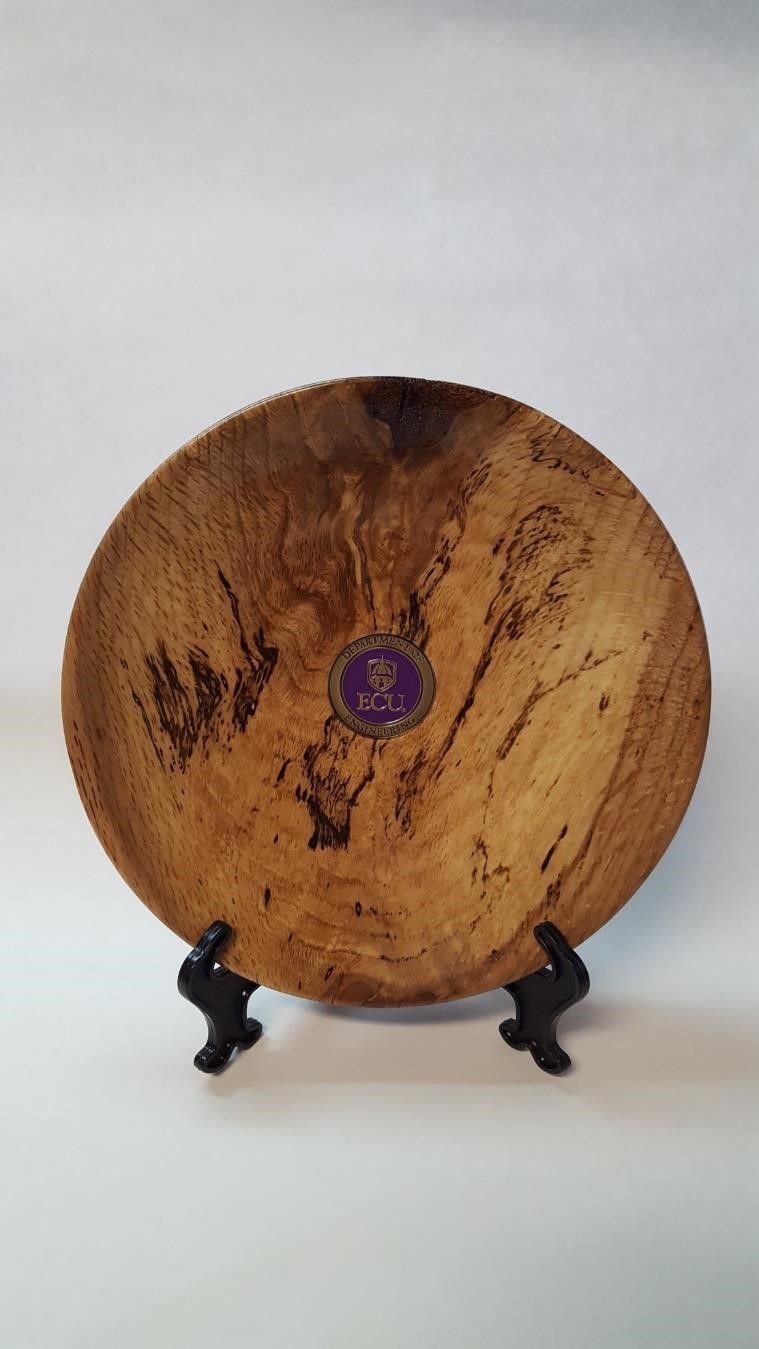 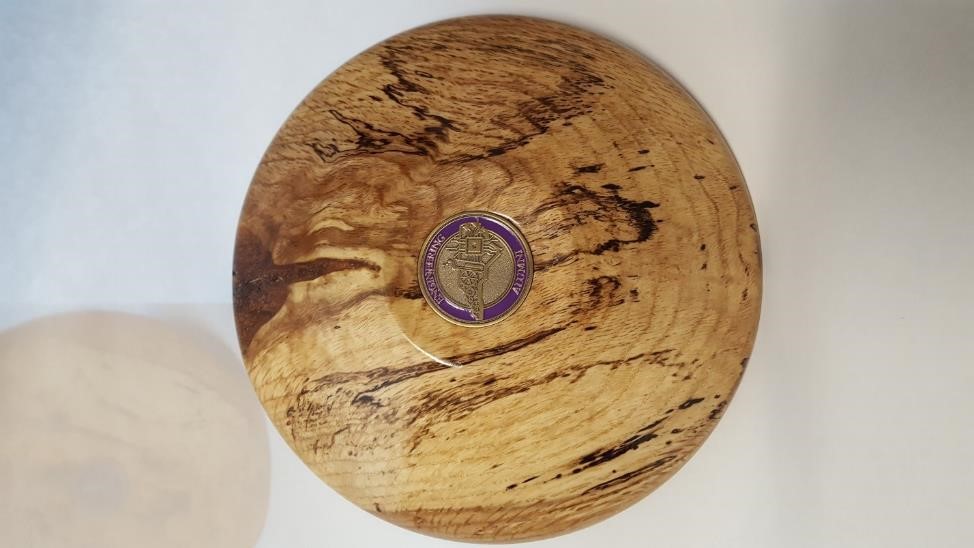 Sometime during the evening, one of the members of the class of 2008 who really has done well for himself as he is now a vice-president for a company down on the coast, walked up to me and said, “I want to buy your bowl.” I suspected he may have had too much to drink so I replied, “It’s not for sale.” He insisted, “I want to buy your bowl.” After some bantering and bartering (his response to everything was always, "I want to buy your bowl"), I gave him what I thought was an outrageous price and told him I would give half of it to the scholarship. He pulled out his wallet, counted out the bills and took home the bowl.

I’ve missed that bowl. In a way it was a personal commemorative piece for me and that first graduating class of 20 aspiring engineers. It was my first group of students as a college professor. I was here for 3 years of their studies. I had everyone of them in 4-5 classes. We introduced each other to what is required of all engineering programs, the capstone project. Capstone was invented long after my undergrad engineering studies at Auburn. I learned from the class of ‘08. I hope they learned from me. Still, I miss that bowl.

One day, shortly after the reunion, as I was looking through the dwindling stash for something else to turn, I found another piece of that ECU oak that seemed reasonably solid and looked like it might contain a bowl hidden under the dust, the Anchorseal, and the spalting. Could I have gotten lucky? Could I replicate “Coin Bowl”.

The answer was yes. And, the answer was no. I was pleased, yes, to find a remaining solid piece of the ECU oak. Still, no two pieces of wood are alike and I’m not a good enough turner to do the same thing twice. I did manage to turn a bowl from that second piece of ECU oak. I made some mistakes, did some things right, and got lucky and ended up with I call “Coin Bowl 2.” In some ways it is not as good as Coin Bowl. In other ways, maybe a little better. A little more bling on this one that makes me think of a port hole on a (Pirate!) ship. It features a slightly larger diameter than the original Coin Bowl and is about 4” deep with a similar wall thickness. I think the figure and color are a little more impressive with Coin Bowl 2. Coin Bowl 2 is my entry for this month’s contest. 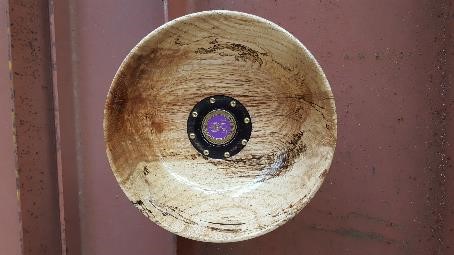 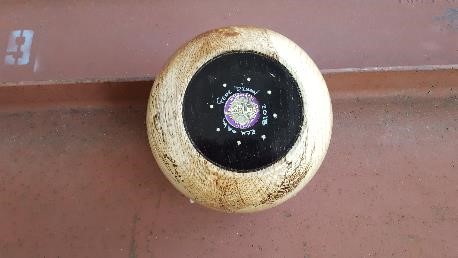 Now you know the back story. Still, us old timers know there is the “Rest of the Story”. The “rest of the Story” is still being written. Maybe I’ll gift Coin Bowl 2 to my daughter, a 2013 graduate of ECU Engineering, now holding a master’s degree in mechanical engineering from Auburn and working at the same place I was working when she was born and raised in SC. Maybe I should send it to TA Loving. Maybe I'll gift it to ECU. Or maybe, just maybe, I’ll just quietly leave it in the office when I retire. Regardless, part of the rest of the story is this…I still miss Coin Bowl. And, I can rest easy knowing that it is owned by an ’08 alum. And alum who will care for it very well. An alum “…who is and always will be…”, my friend.
Last edited: Jun 4, 2019

Jeff
Back Story: Three weeks ago my wife said to me late Saturday morning that my grand daughters wanted a seesaw. I looked out the back window and said, look there's a stump I can lay a board across. She gave me that roll your eye look. I know this look... it means she wants me to make something in the wood shop. So I told her, yeah got it... I'm off to the lumber yard, I'll be back in a little while.

On my way to the lumber yard, I pictured in my head what kind if seesaw I should make. Then I started thinking about the materials needed and how I would make a quick seesaw for my grand daughters.

After about 2 hours in my wood shop, this is what I came up with. Pretty cool if I do say so myself. My wife and I rode it and its plenty sturdy enough. With no picture or plan, it came out really good. I made the height adjustable, its on number 2 of 4. 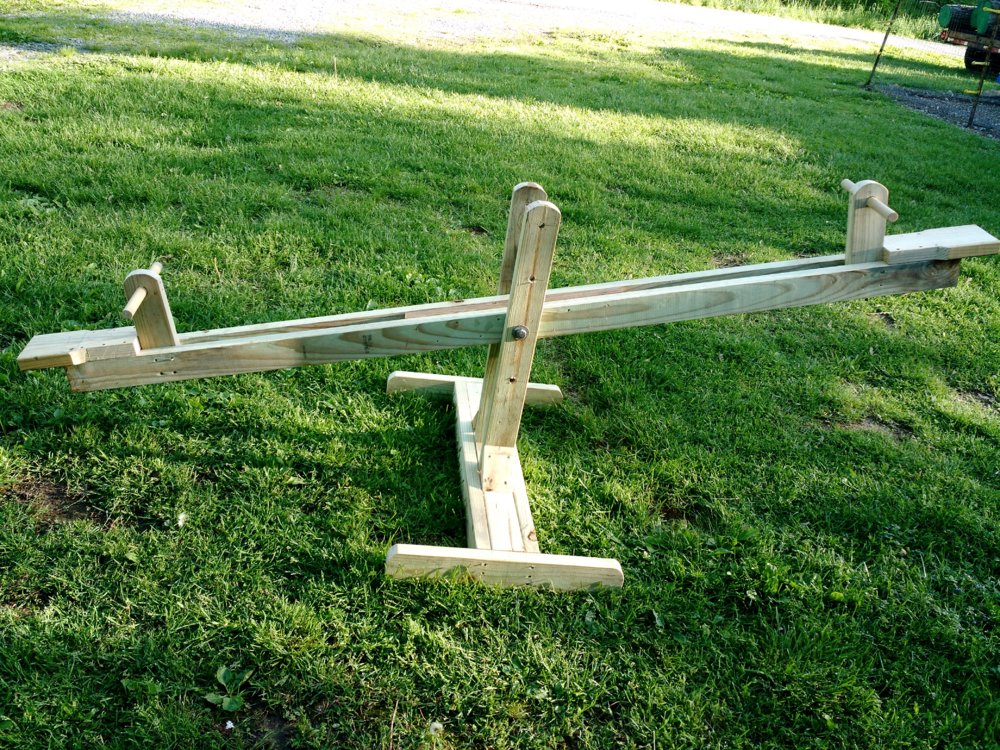 My grand daughter's love it. I was informed "Paw Paw This is the bestest seesaw ever". My oldest Grand daughter was amazed her little sister can make her go "so high in the air, like a frog" Kids are just to cool, it's fun to be a kid. Not fine woodworking by any means, but this simple project brought a big smile to my face. It was most definitely worth it, if for nothing else but to see my grand daughter's having a blast riding the thing. 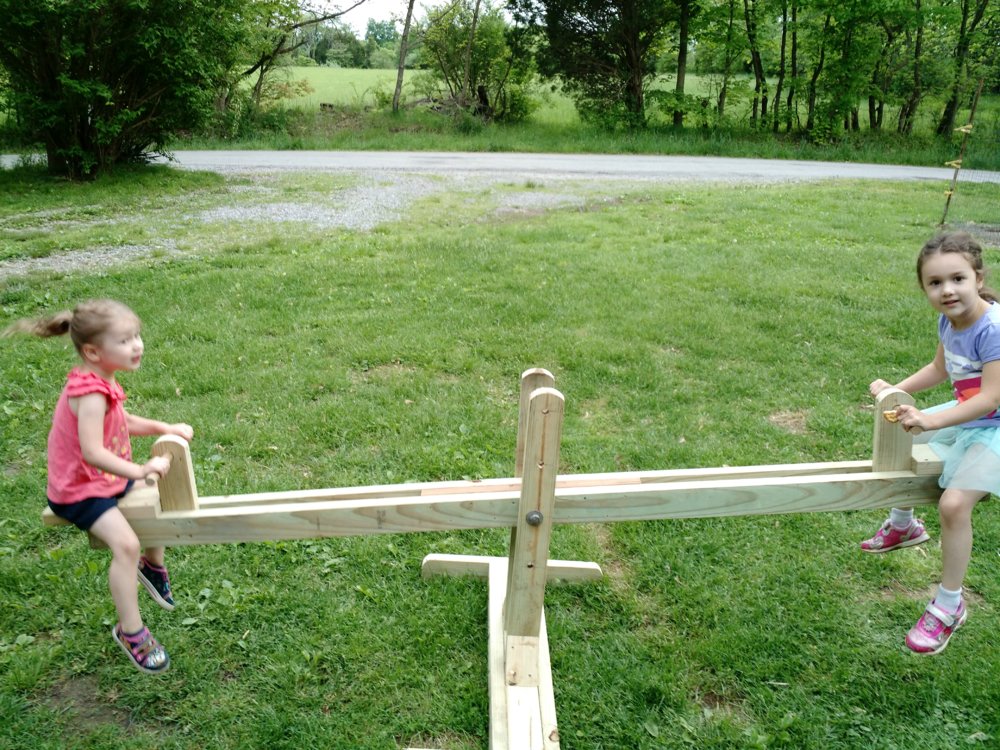