Richo
Senior User
Back in 2018 I posted about my next project: Next Project

After many months the project is now complete. 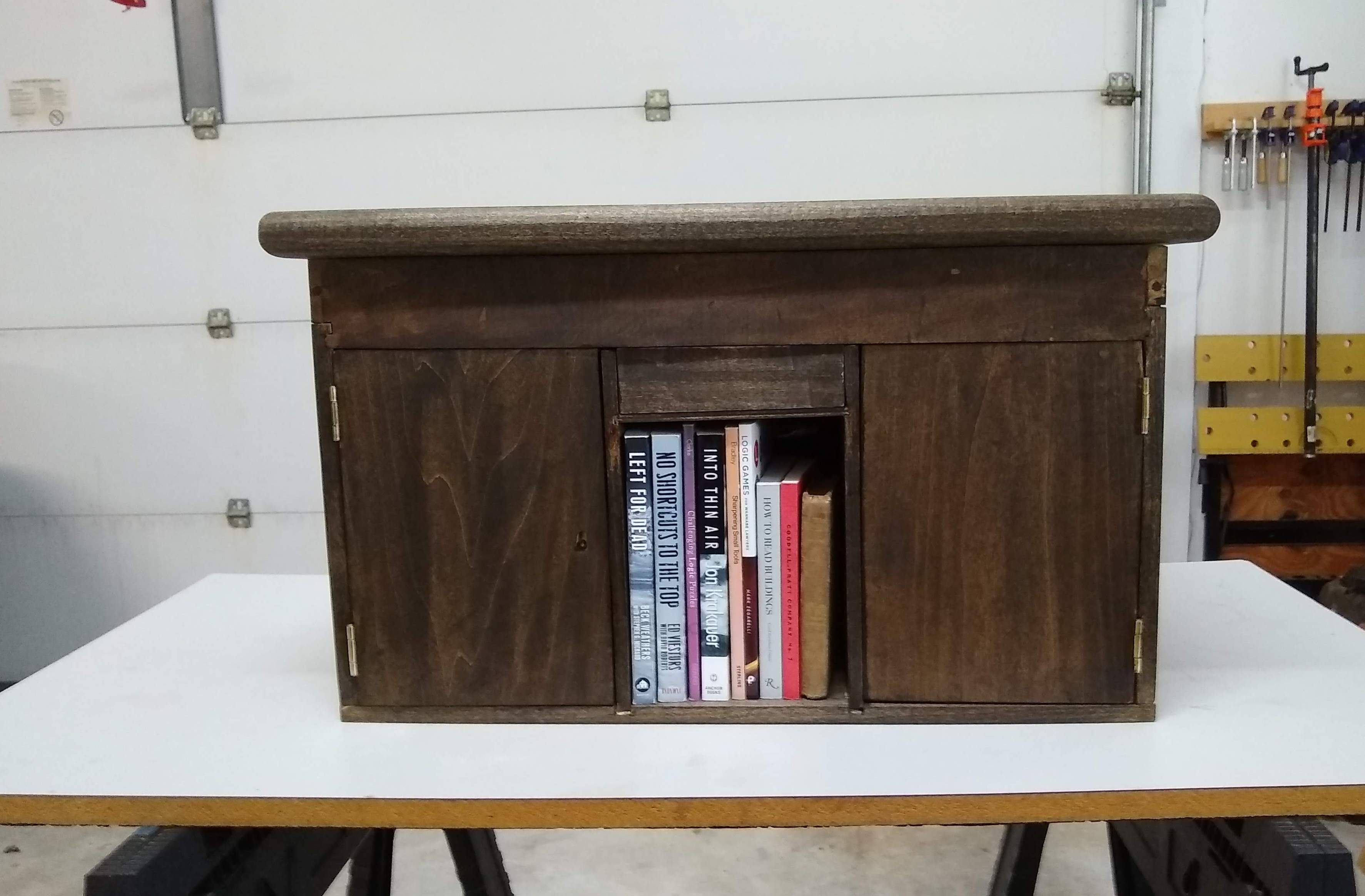 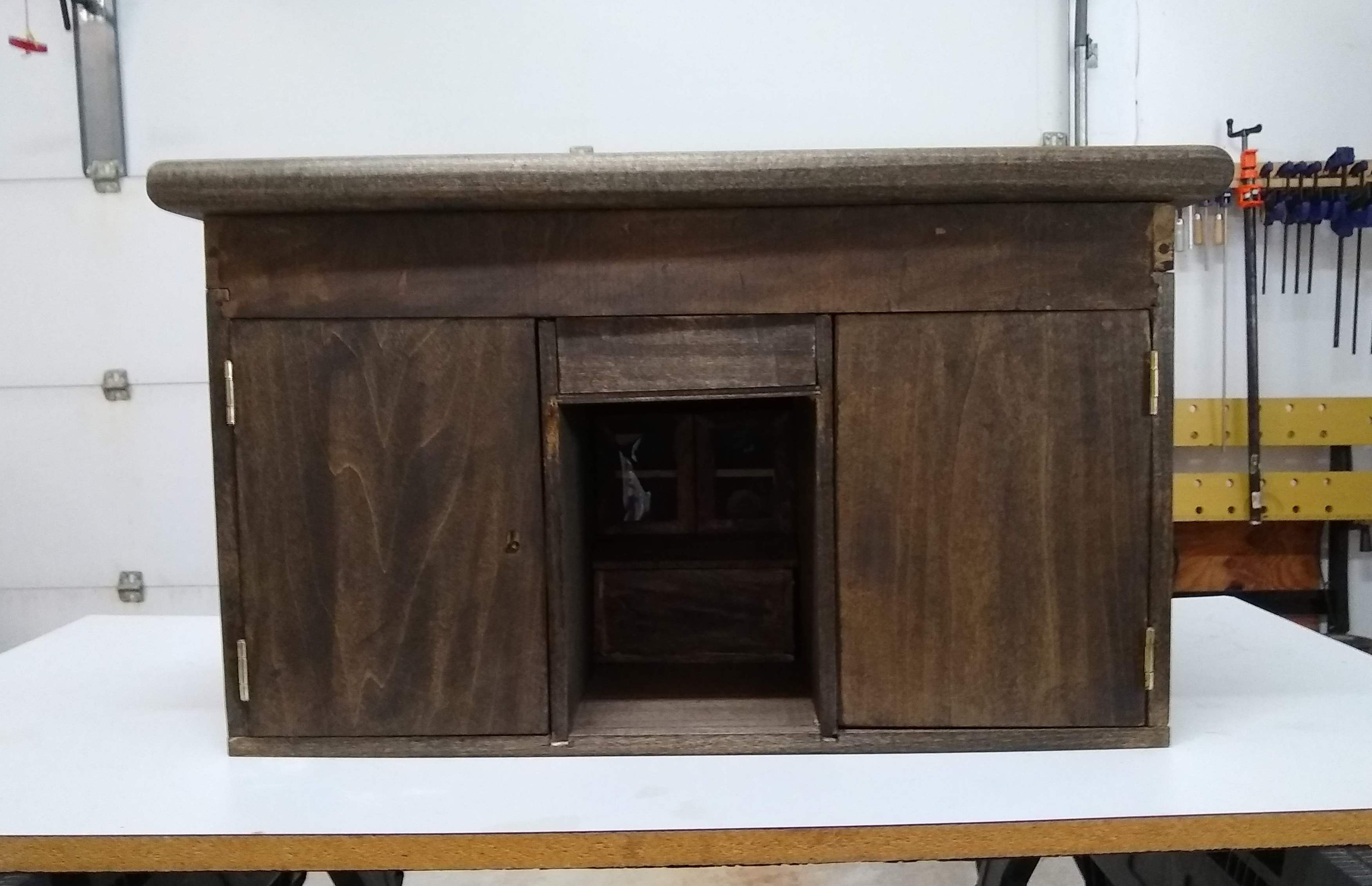 This is a puzzle cabinet based on an apothecary that I saw at the Luray Valley Museum in Luray, VA in early 2018. It isn't an exact reproduction as I didn't take a photo of the apothecary due to photography restrictions in the exhibit so I sketched what I remembered later. My cabinet is most likely larger than the original and I have no idea what it looks like inside the closed sections since the apothecary was inside a display case. Also the top center area on the original is a shelf and I have placed something else there.

The puzzle cabinet holds 29 puzzle boxes, brain teasers and other 3D puzzles. These are all commercially sold puzzles and none I made myself. It requires a sequential order to solve and open with twelve steps to reach the end. Some of the puzzle boxes are part of the sequential order and require solving to access tools and keys. There are different locks, mechanisms and access points some of which are based on other pieces I've made, some on 18th and 19th century furniture pieces I've seen and some I designed during the course of this project. 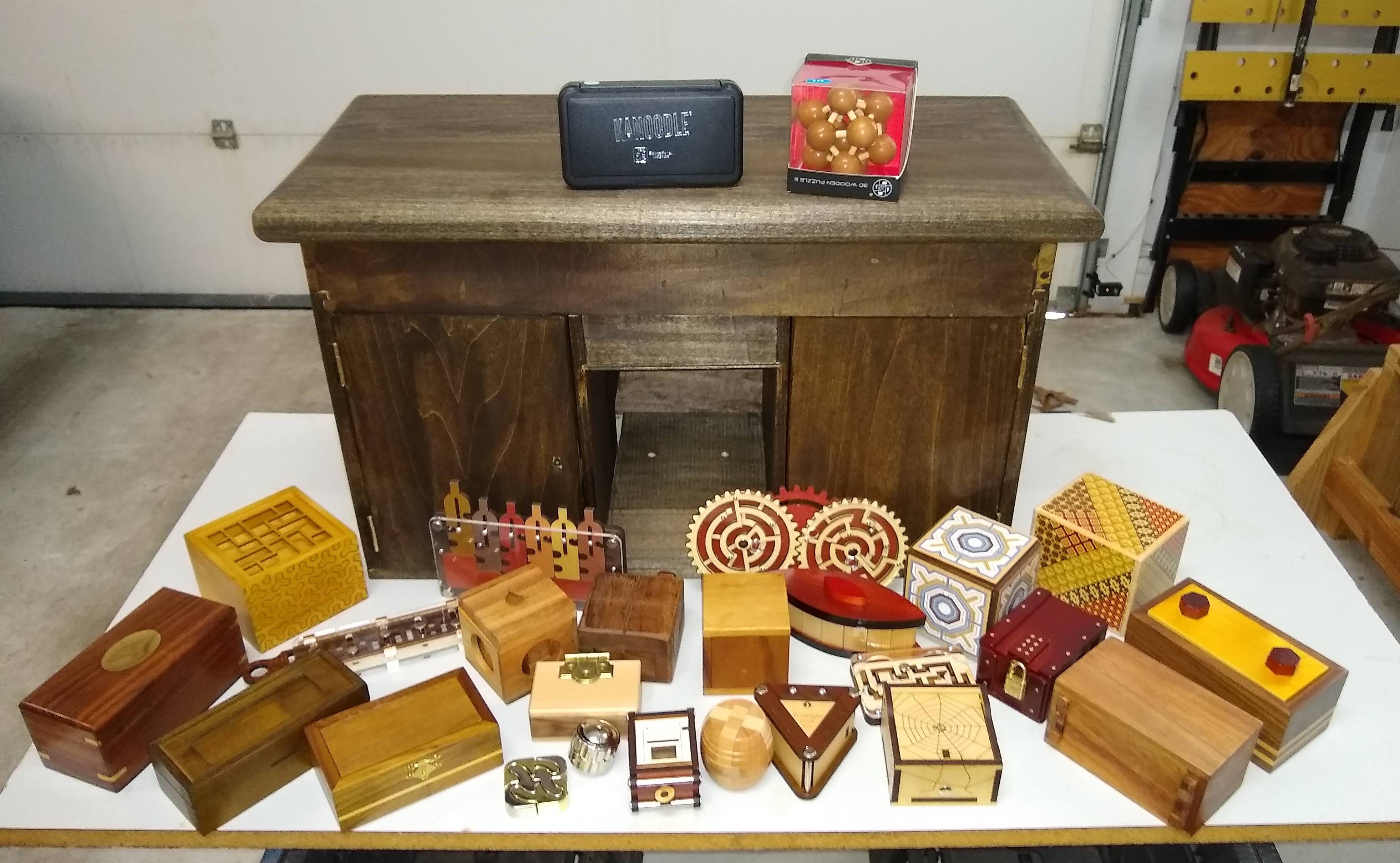 Collection of puzzles that fit inside the puzzle cabinet. These are all commercially sold...
This photo shows less than 29 puzzles but I neglected to show a couple that were either disassembled or still in their original shrink wrap and not yet solved. Believe it or not there is still room for more puzzles. 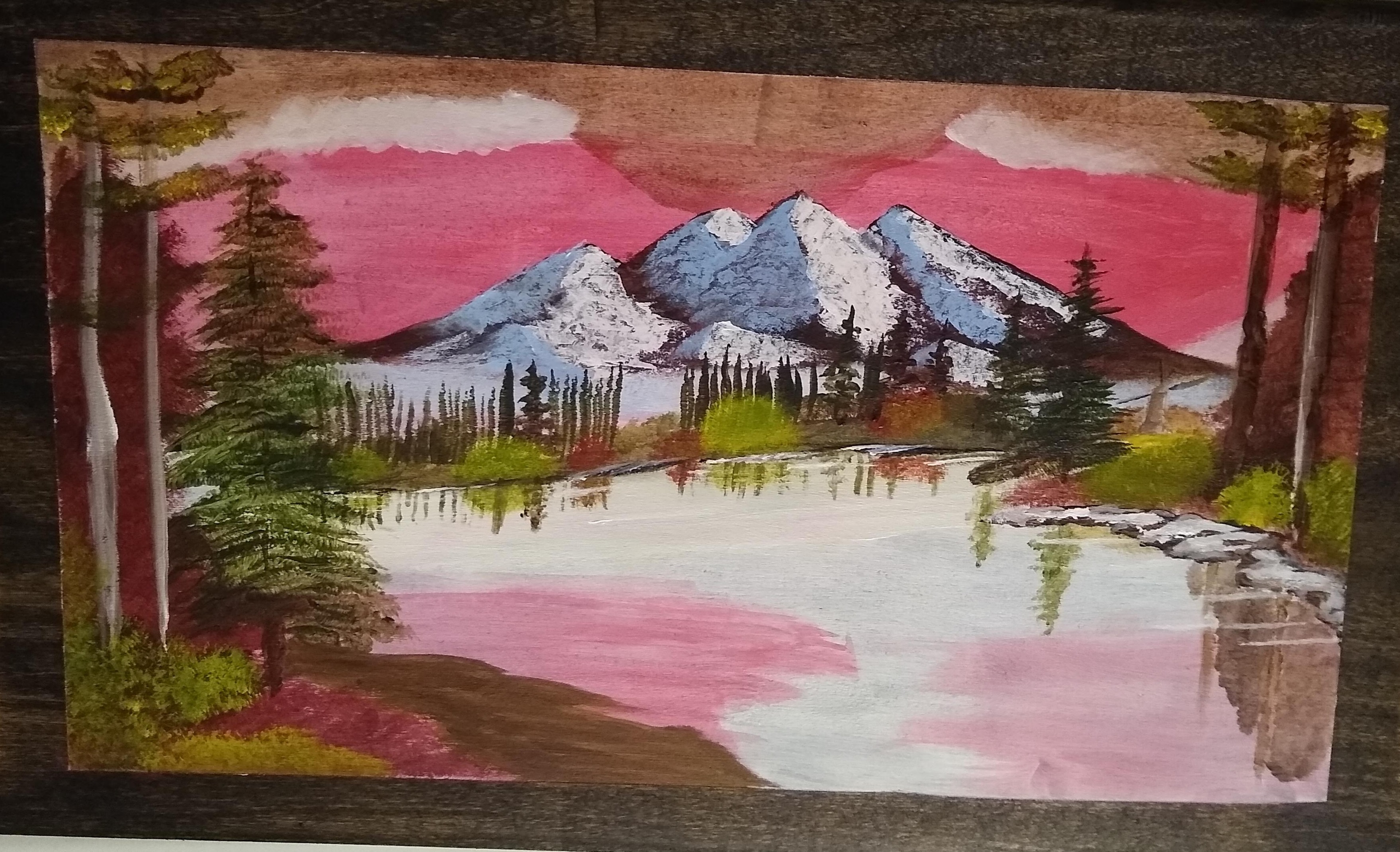 Painting on inside of lid 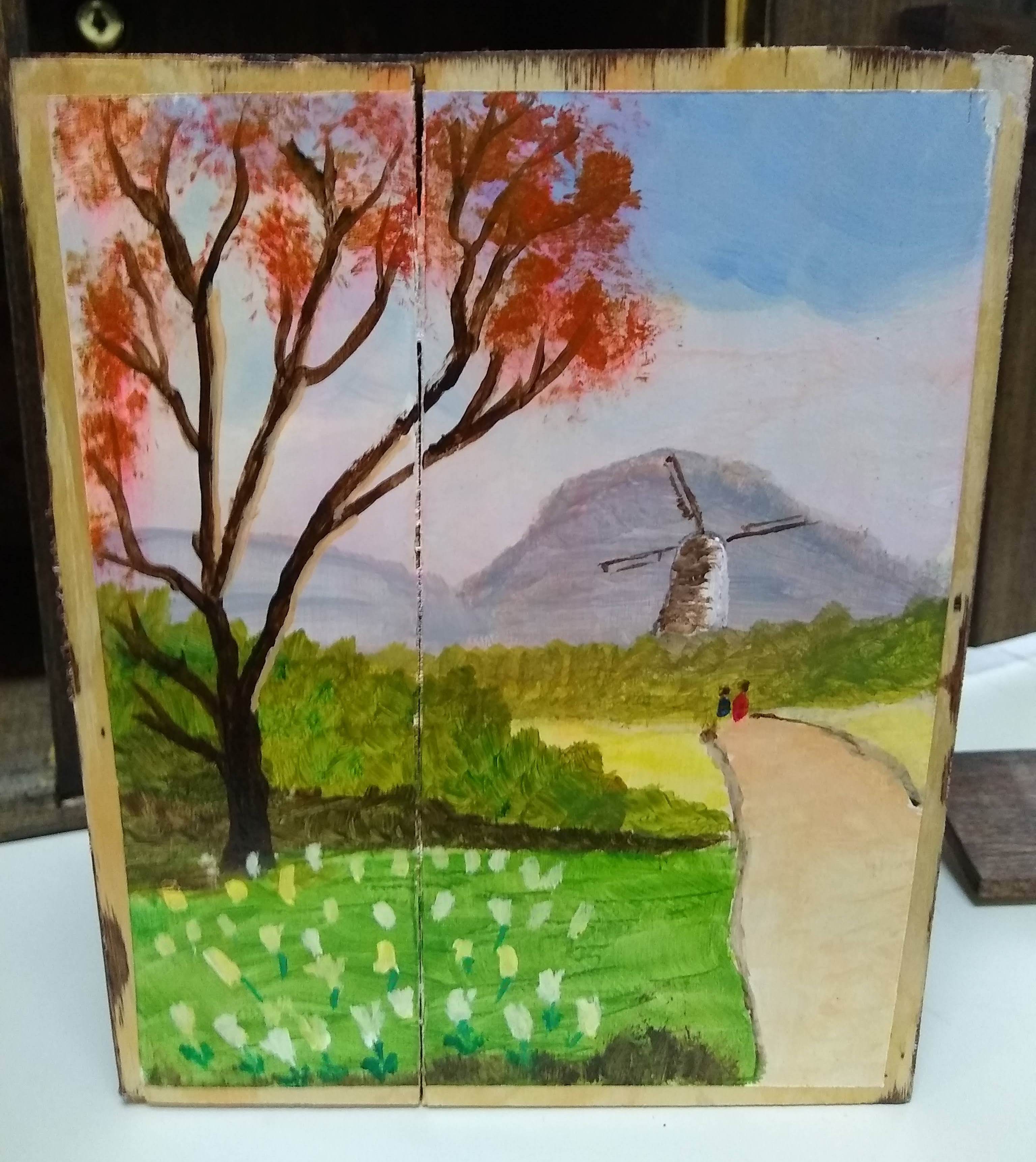 Painting on reverse of obstruction 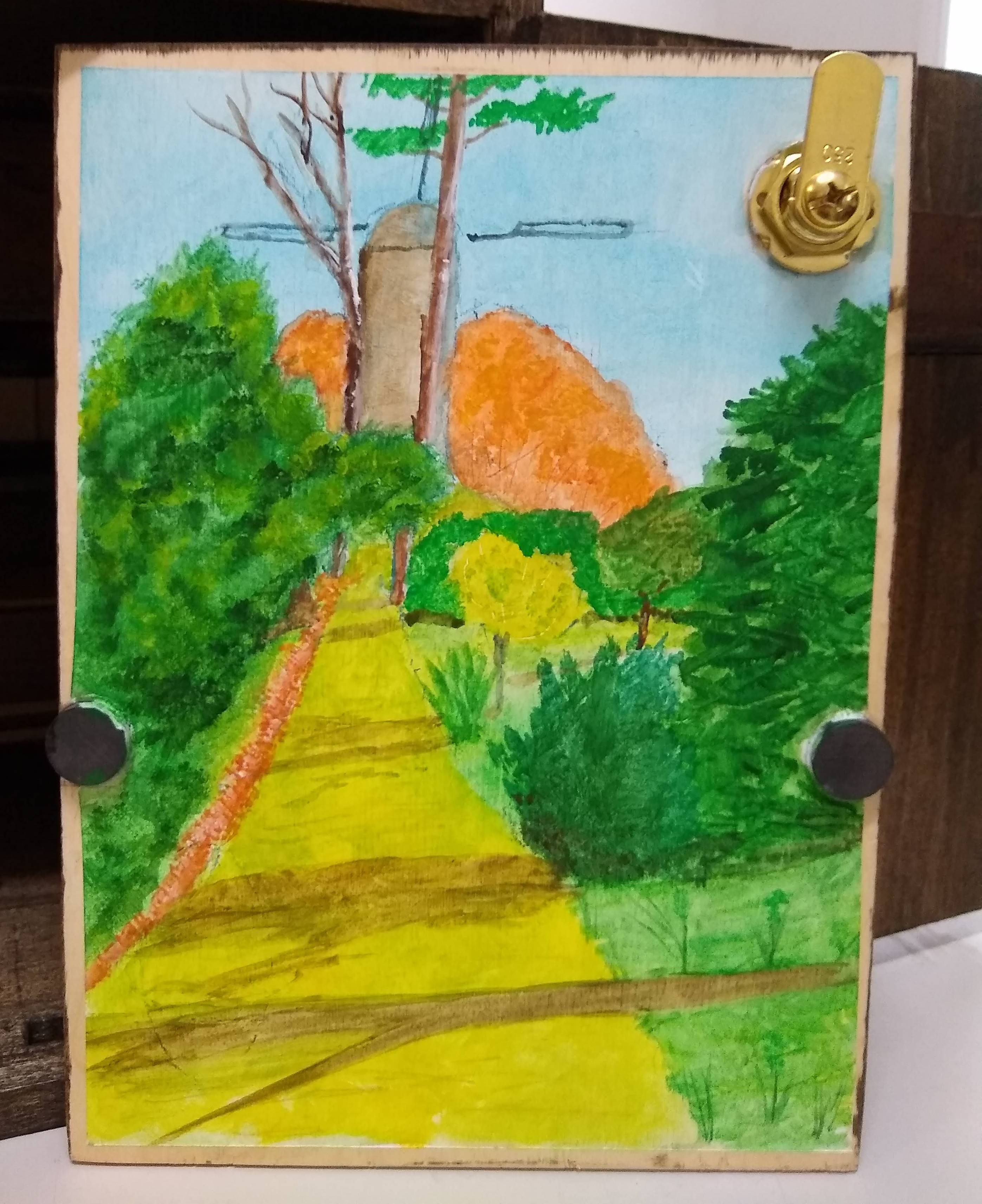 038_Painting on reverse of removable panel.jpg

Done of view in my backyard with some additions appropriate to the sequential order of the...
Based on the teachings of illustrator James Gurney, done in gouache 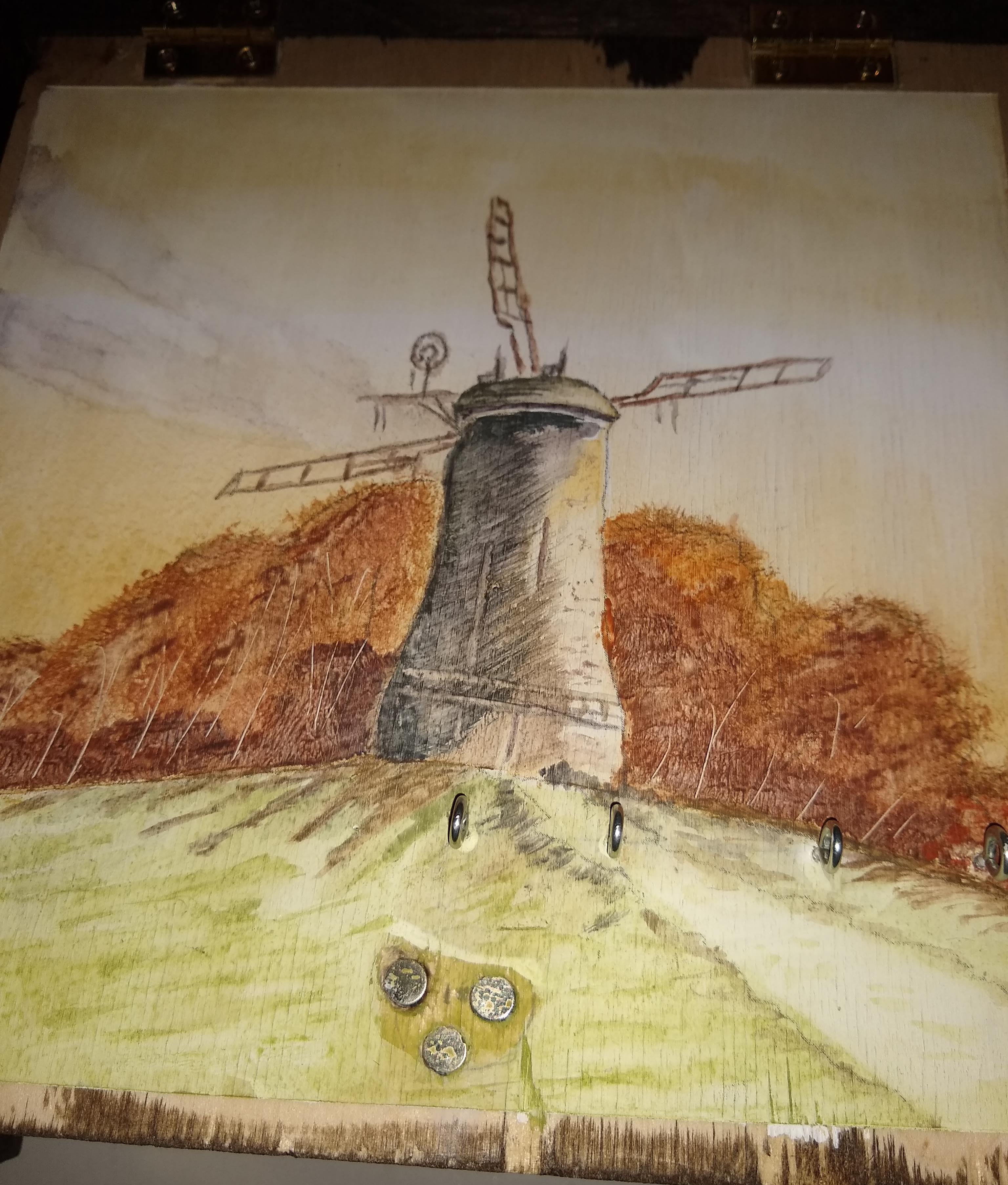 Painting on reverse of flip down panel 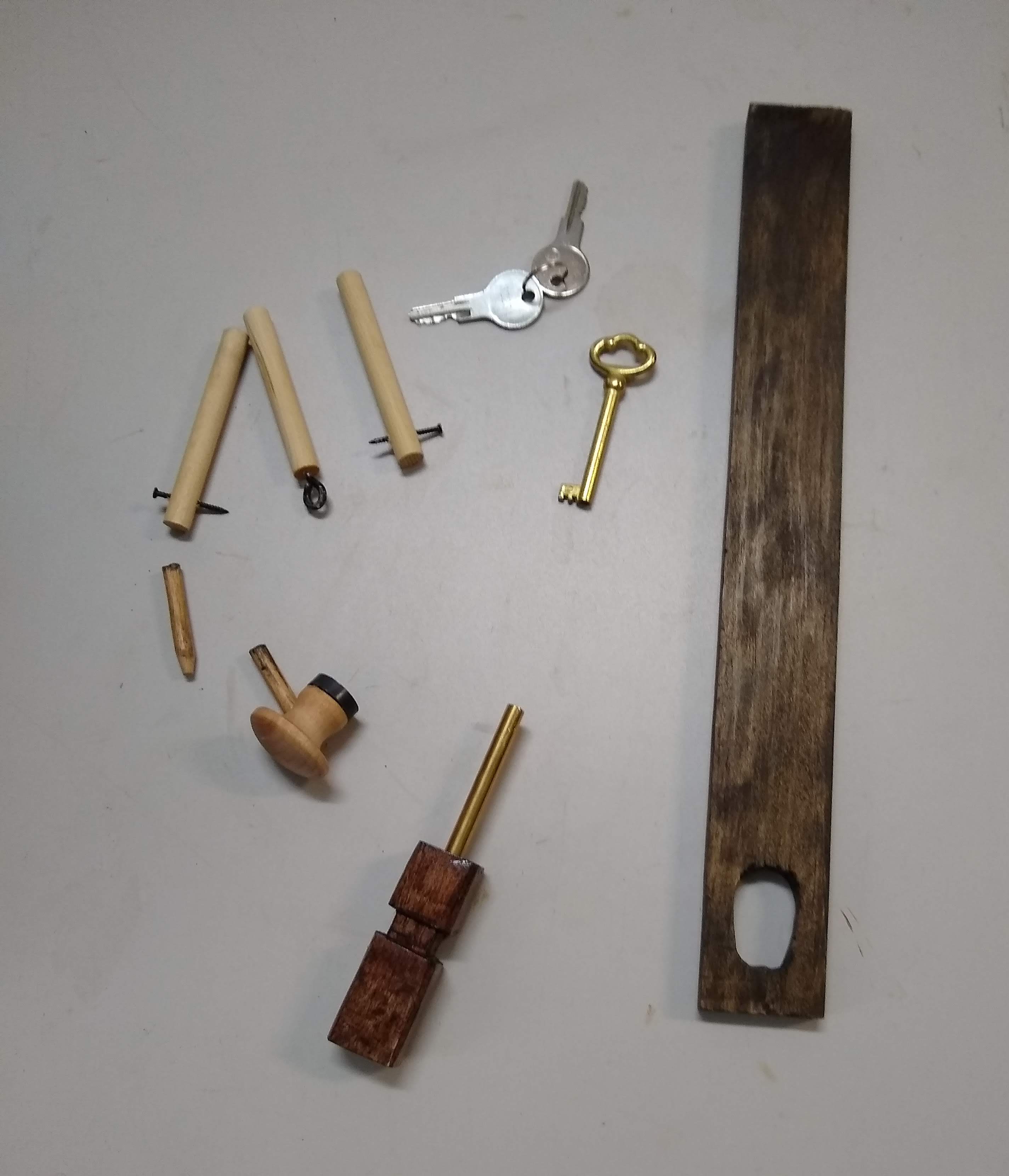 All keys and tools

Group of keys and tools that were made specifically for this project plus commercially made modern keys. 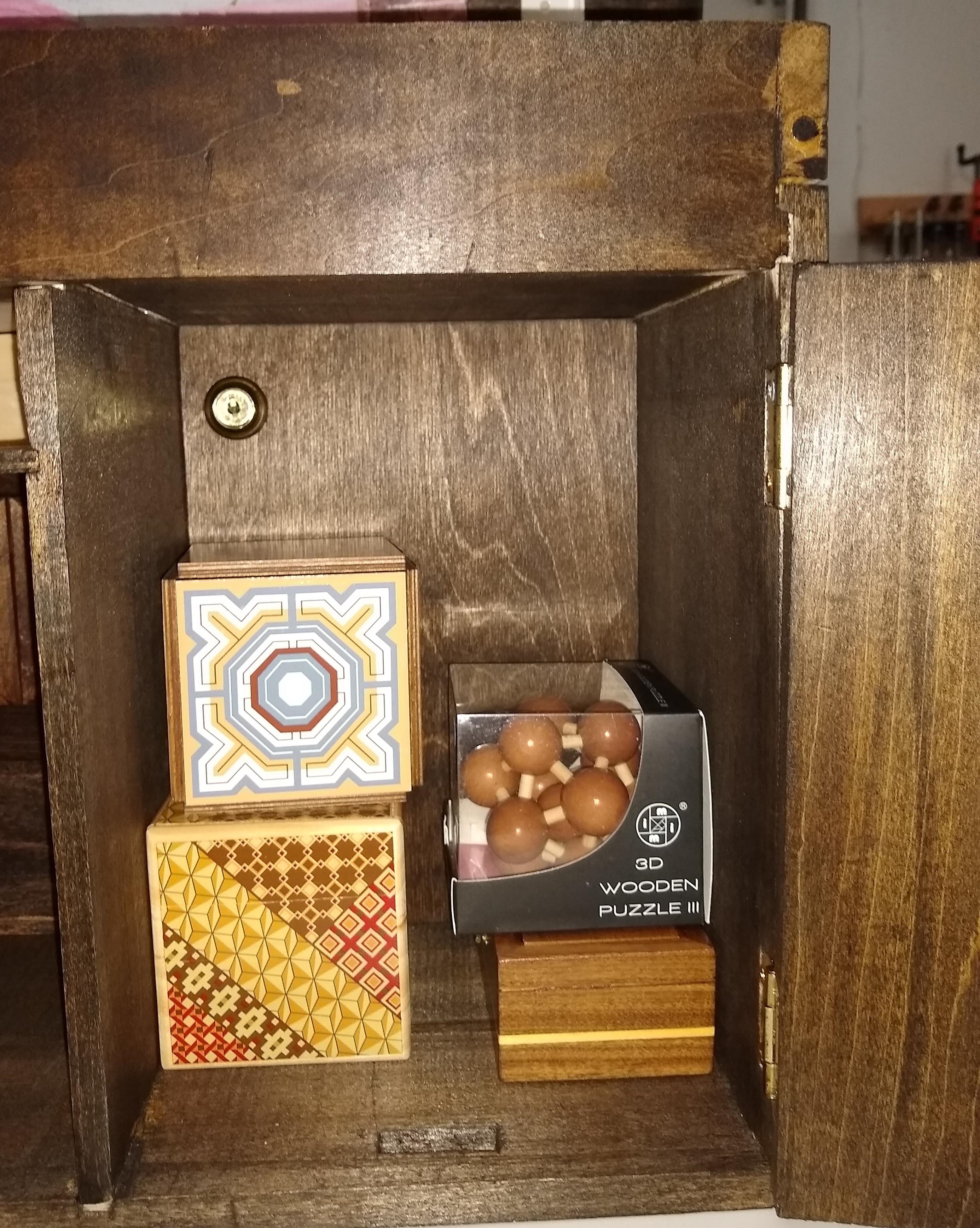 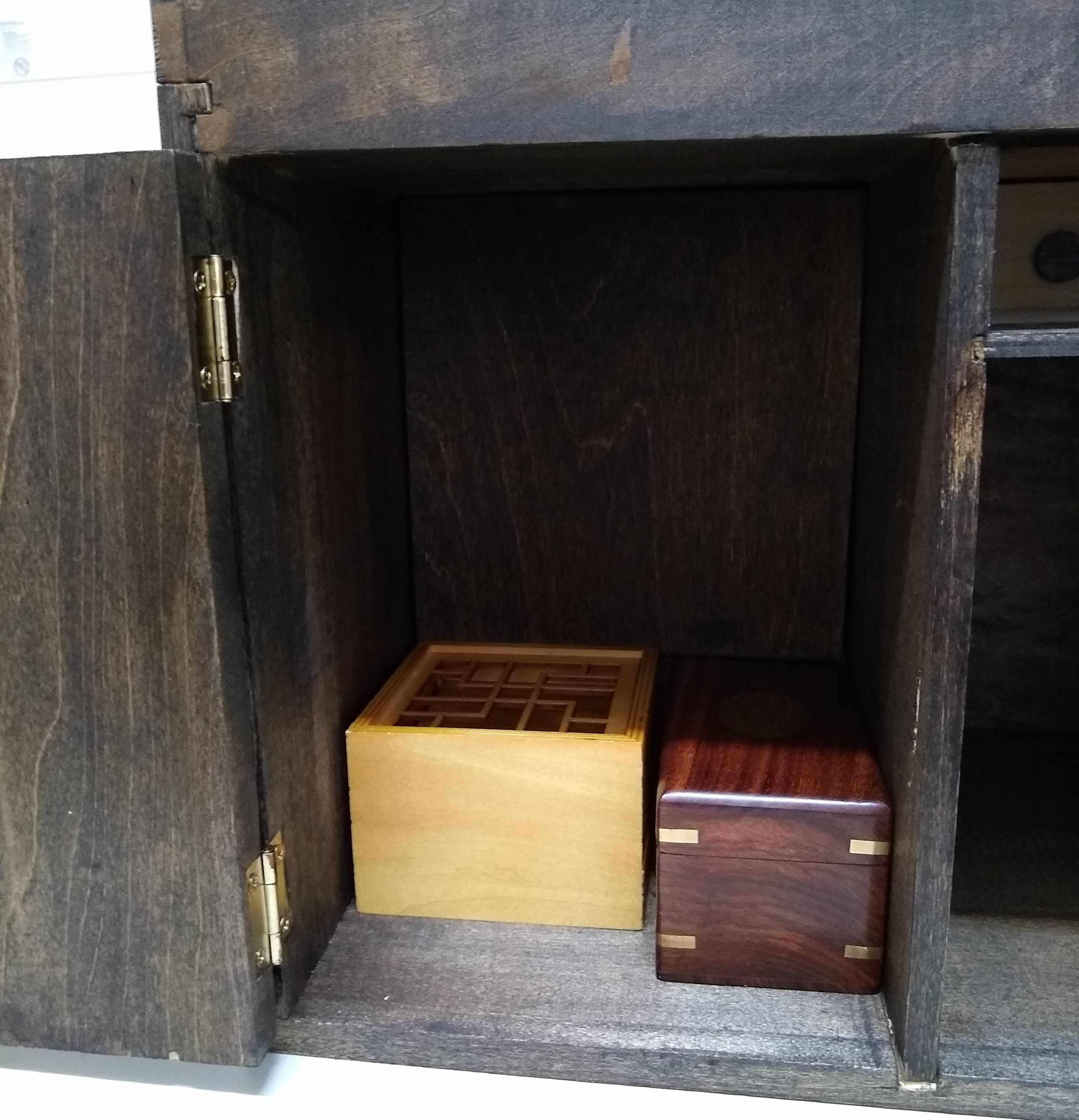 Views of what can be found on the other side of the two closed doors. Note only the left door has a key hole. The right door doesn't have a keyhole or a knob.

There are four secret compartments inside the cabinet. 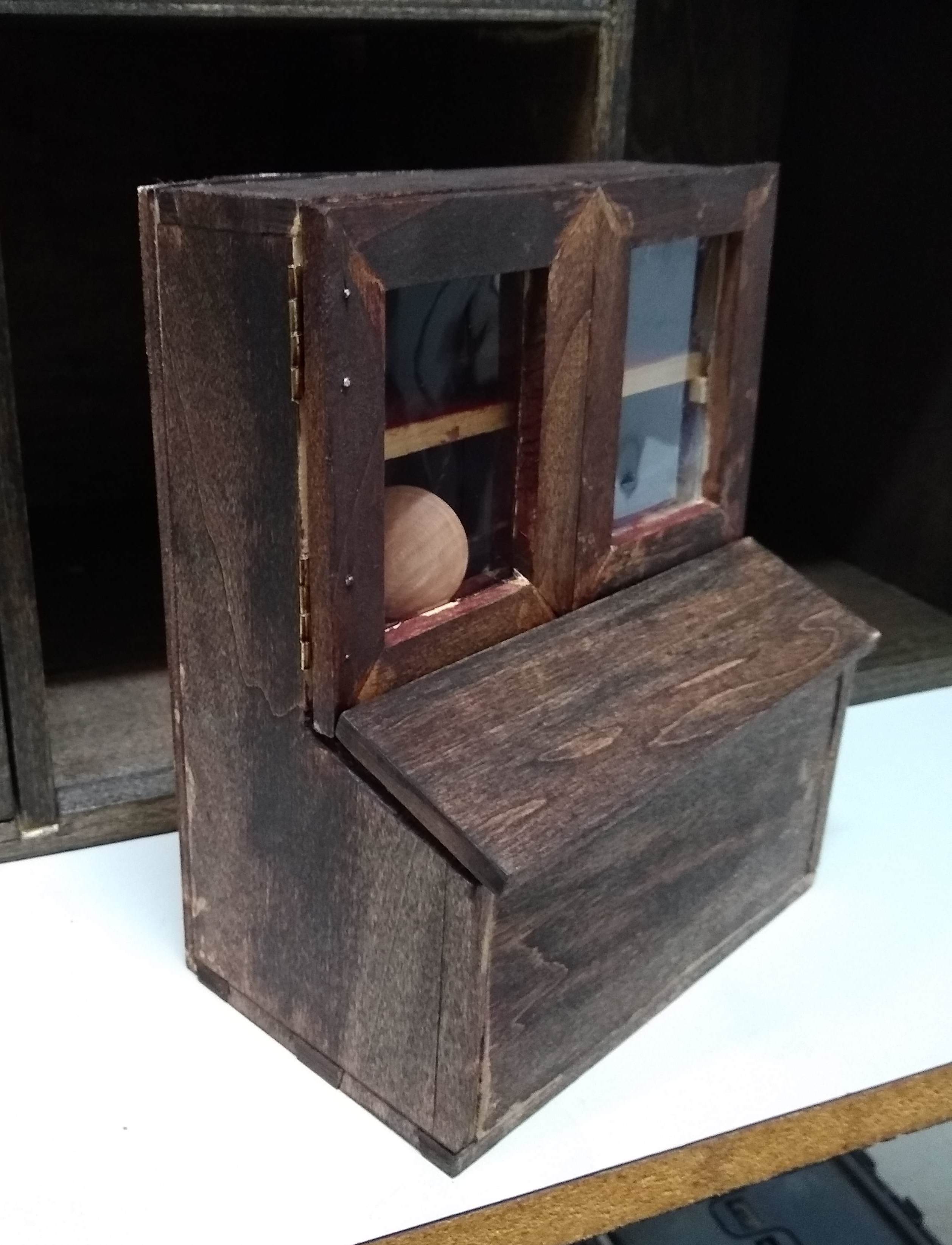 Obstruction that sets in the back of the center open section to block one of the secret compartments. Built to resemble a desk and bookcase, the desk comes off enabling someone to remove the locking device that holds it in place. The reverse of the obstruction has the painting from the Frank Clarke lesson of the couple walking by a tree down a hill.
The obstruction also holds a wooden knob used for gaining access to the final space in the cabinet. The well of the obstruction can be used to house disassembled pieces of a 3D brain teaser that has not yet been solved. 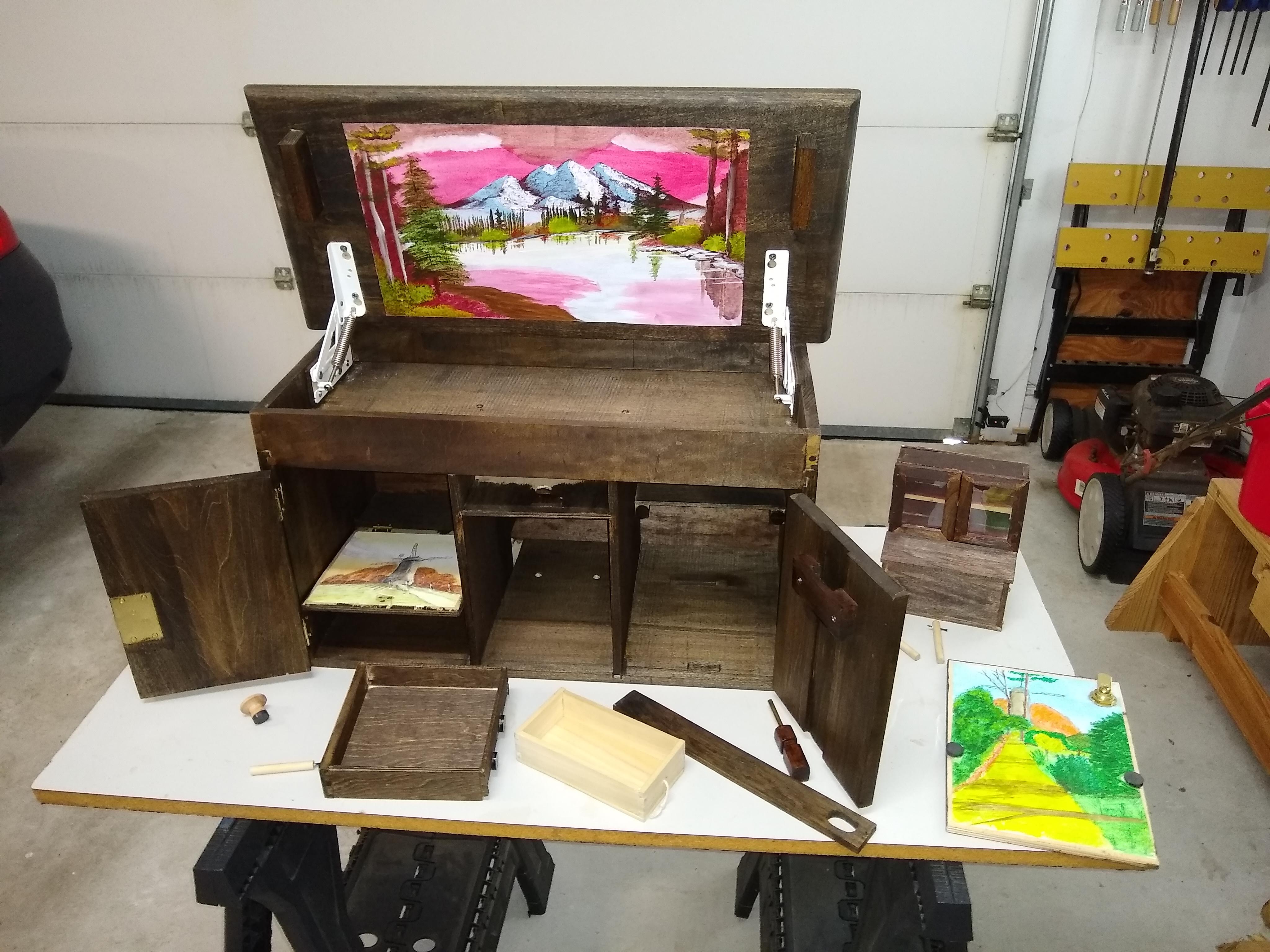 Cabinet open with all components.jpg

Cabinet open with all the components and some of the tools visible. The hinges for the lid were ordered from McMaster Carr and are for large metal cabinets. I needed something that would open the lid but leave no visible hinge outside the cabinet so it could possibly appear that the top isn't a lid after all. The lid has no visible lock either and requires some trial and error to figure out how to open.

The cabinet has been stained but not lacquered. In its current state it looks like the apothecary its based on which for me was the original intent of the project. The back is temporary and will be modified at some point in the future. But at this point the project is complete because the cabinet is doing what it was created to do and I don't feel like working on it anymore. Good enough reason to call it finished. The wooden and brass key was stained and shellacked.

Most of the photographs were taken in my garage but the cabinet lives in my office/den inside the house where the climate is better controlled so drawers and locks don't swell and puzzles, paintings and the cabinet get along very well.

Charlie
Corporate Member
Richo, Very nice and well thought out. Too difficult for me. I could never solve all the puzzles. Lol.

Richard
Senior User
Ah I love this! Layers upon layers. It reminds me of the old computer game Myst.
H

snack31 said:
A labor of love, combining elements of your vocational and personal journey. Well traveled, sir.
Click to expand...

Agreed. And WOW!
I am often drawn to this sort of work, but have never attempted anything like it.

Raymond
Corporate Member
Well, you have blown me away, RIcho. Great project!

Bas
Corporate Member
Wow, that is so cool, both the puzzles themselves as well as all the secret compartments in the cabinet. The paintings take it to whole different level. Great work!!!

Wayne
Corporate Member
Really cool!! Just have to admit that I had to read your text twice to get my head around how the puzzles all fit in the cabinet.

snack31 said:
A labor of love, combining elements of your vocational and personal journey. Well traveled, sir.
Click to expand...

Thanks Don. Don is one of only a handful of folks that have seen the cabinet opened in its full sequence.

Ernie
Corporate Member
Way to go, Richo. I know it was a long time coming and glad to see it turned out so well. Great job!

Joe
Corporate Member
We were treated to a demo last month and it took a lot of time to get through the puzzle layers. Really impressive.

Frank
User
How in the world did you figure all that out just by seeing a box in a display case in a museum?! Very impressive!
A

Phil Ashley
Corporate Member
that is amazing! what an accomplishment

FrankK said:
How in the world did you figure all that out just by seeing a box in a display case in a museum?! Very impressive!
Click to expand...

I guess I don't know. I started out in woodworking back in 2014 wanting to only use the plans of others. But I've only actually done that a couple times. Most of my projects I figure out how I'm going to build something on my own. I've found that Conserving antique furniture for nearly twenty years now I know how they are put together enough that I can sort of figure out what I need to build. But remember, the outside appearance of the puzzle cabinet is all I know from what I saw in the display case. All the hidden, mechanical stuff I created on my own, and it wasn't quick, but took a couple months to plan out.

Canuck said:
Really cool!! Just have to admit that I had to read your text twice to get my head around how the puzzles all fit in the cabinet.

Several are stacked on top of each other. 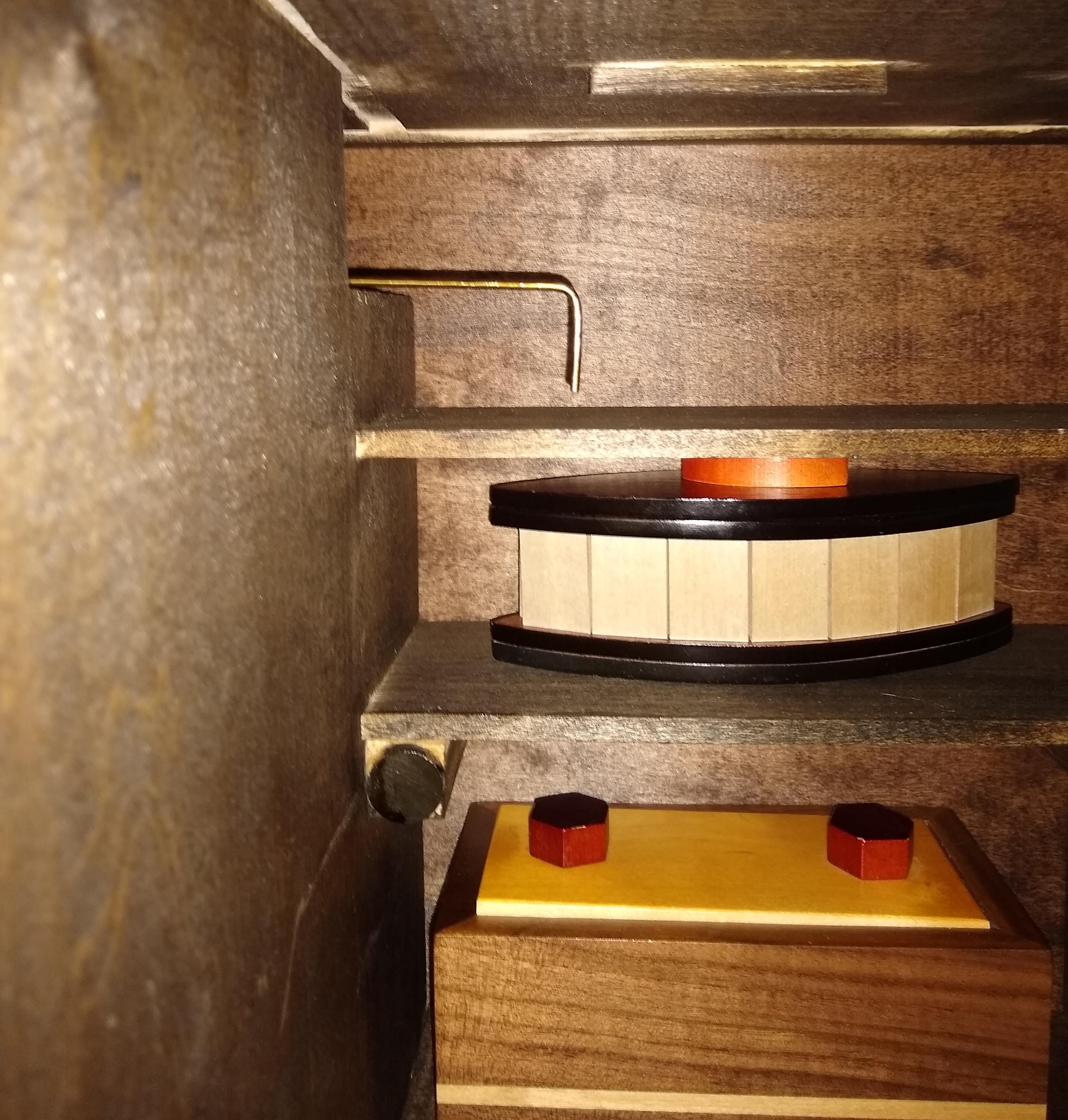 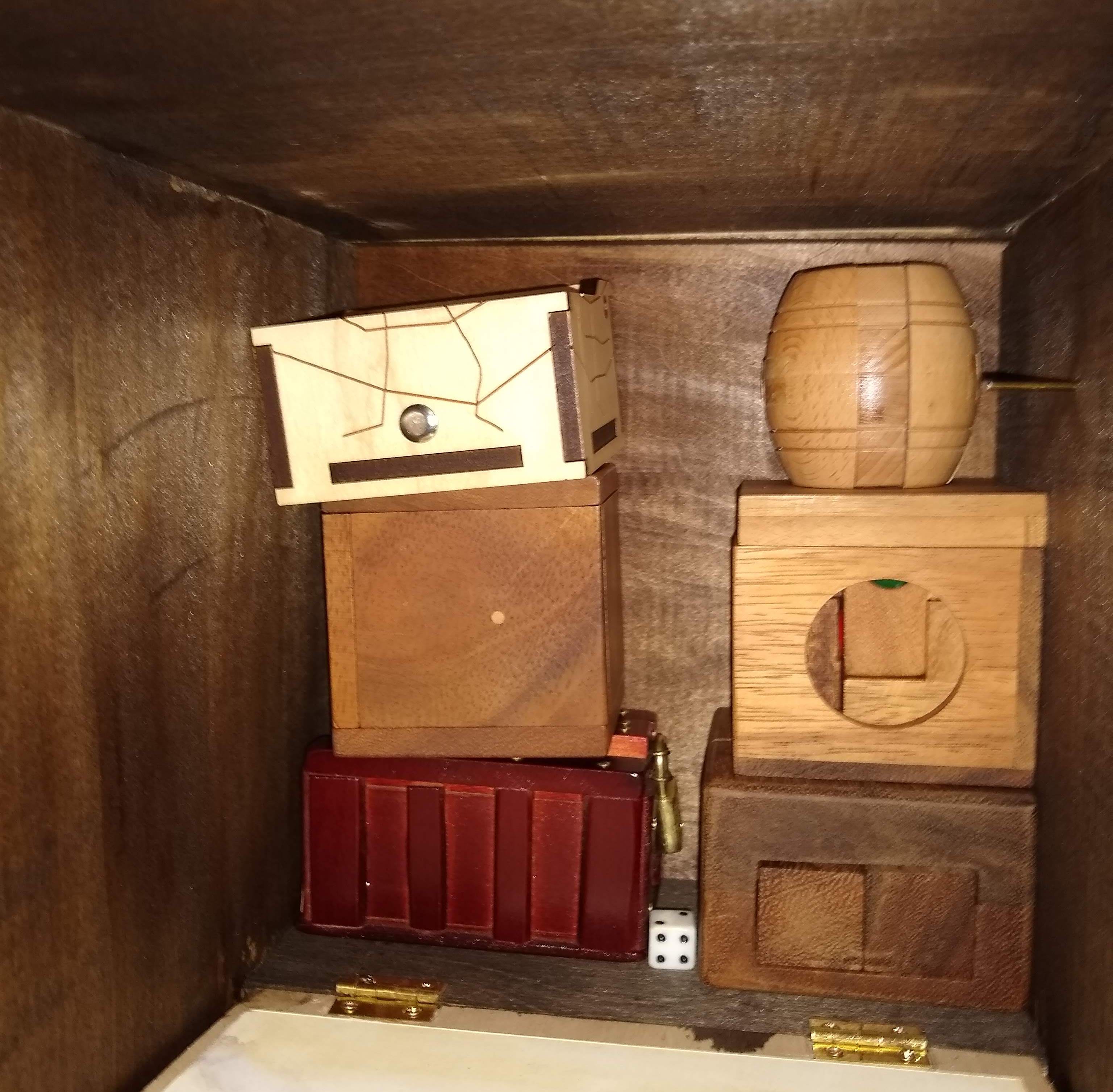 050_Contents of secret area behind panel.jpg 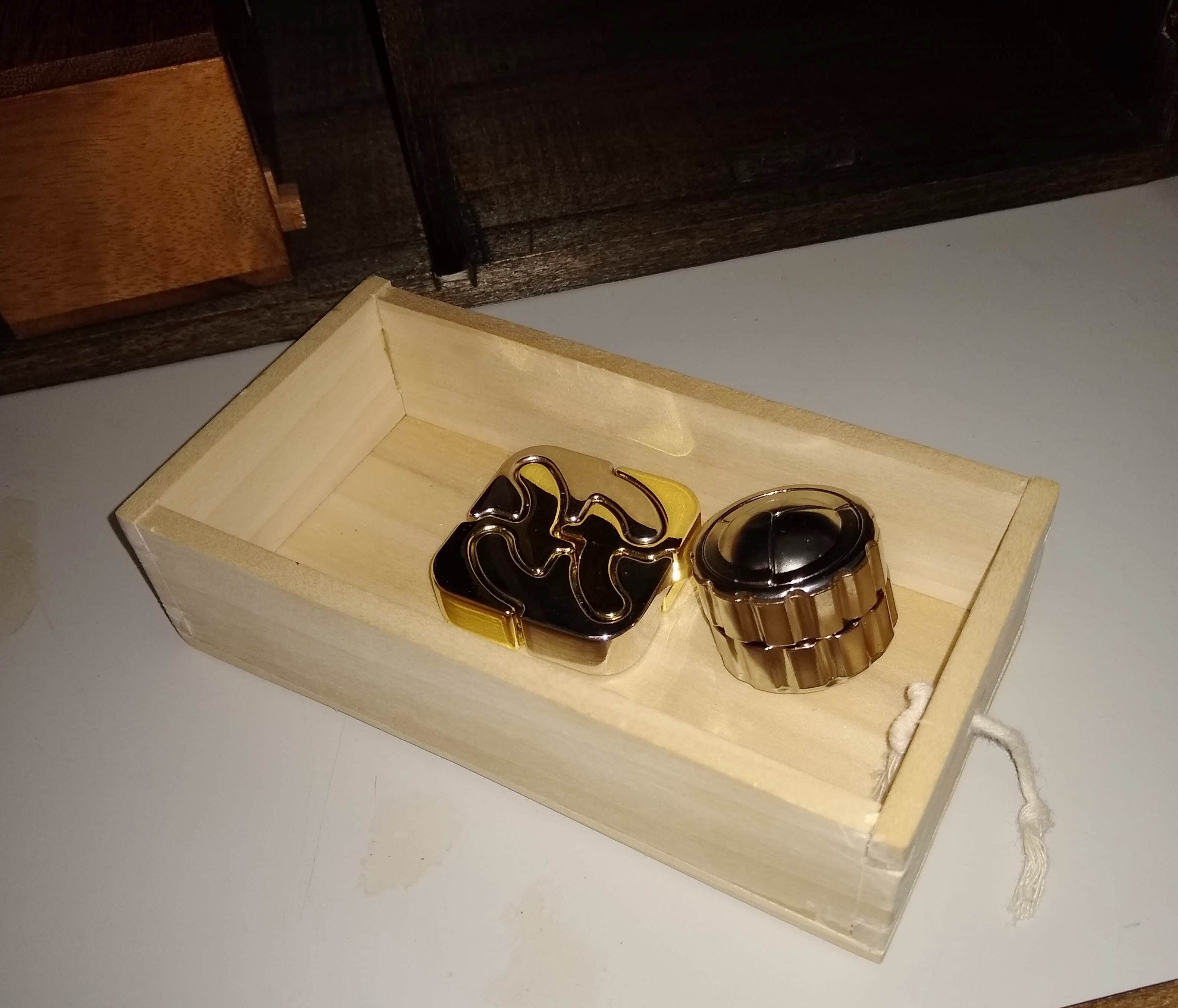 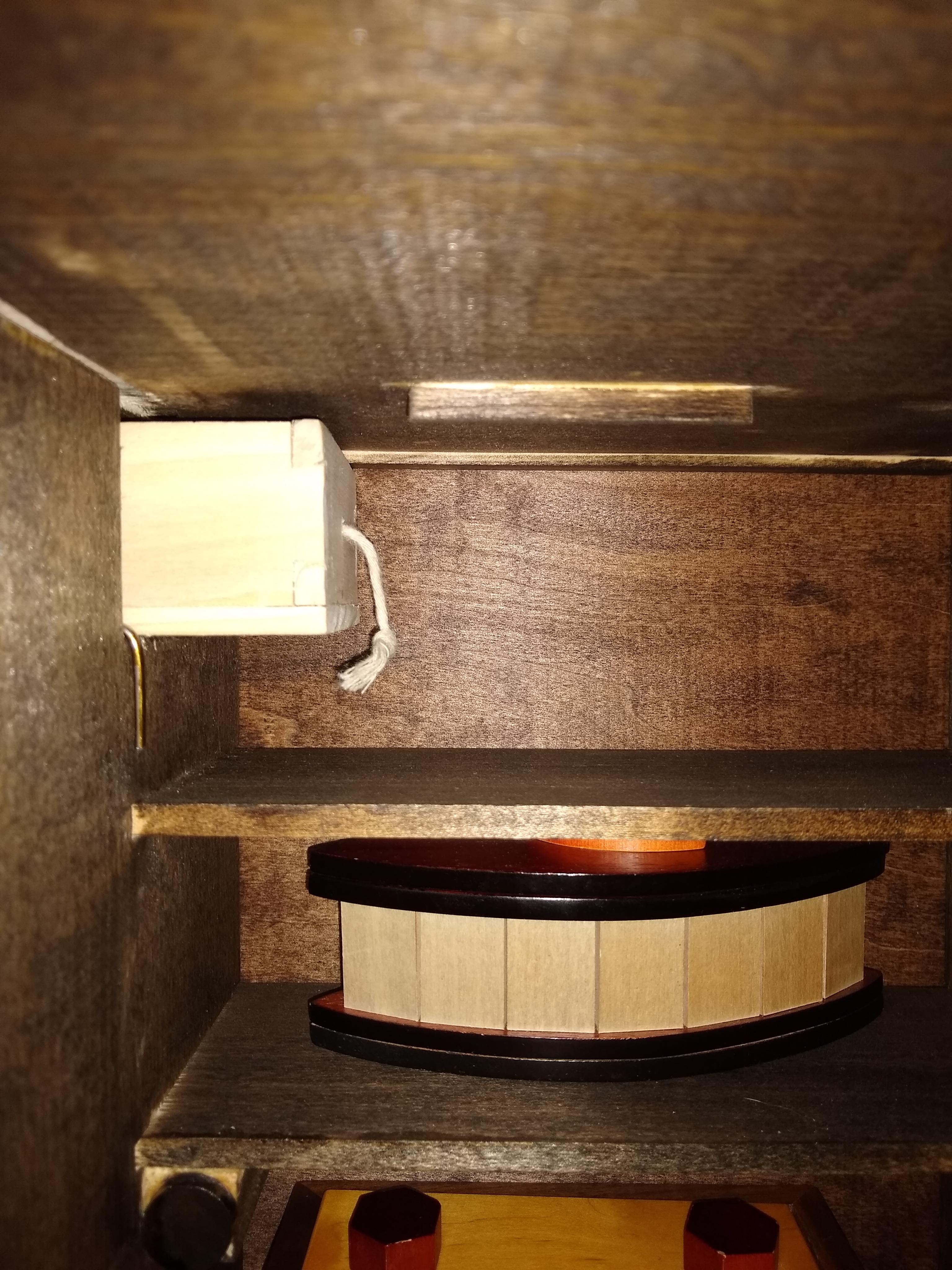 I realized I didn't include an image of the lone secret drawer which is accessible from behind the secret panel inside the right cabinet. You can see it appearing from its location in the center section. The secret drawer is about the only piece that is not stained and I did this on purpose. First because I like the contrast of a light drawer inside a dark cabinet. Secondly the underside of the secret drawer acts as my signature for the cabinet. I usually sign stuff on the bottom but in this case I chose the secret drawer.
You must log in or register to reply here.
Share:
Facebook Twitter Reddit Pinterest Tumblr WhatsApp Email Link