I'd like to build a sign to help a friend with his busines and I need some help.

The sign will be 4 ft. wide by 3 ft. tall and attached to 4x4's that will be set into the ground. The construction isn't where I need help as much as what type of materials to use.

1) What tpye of material should I use for the main sign board, I'm not sure if I'm going to paint the sign flat or make raised letters. (I won't be using routered letters because I really don't like the look) There will be lettering on both sides.

2) What type of paint would I use to make it last, the sign will be fully exposed to the elements.

Thanks in advance for any help.
Jimmy

For an even longer lasting sign automotive acrylic enamel is great, but costs a lot more.

And the ultimate is Imron from DuPont

I painted signs twenty-five years ago with Imron that still look great.

Jack
+1 only point I wood add MAKE SURE NO EDGES ARE EXPOSED tp the weather, wrap em with a trim dadoed to slip ply into

For an even longer lasting sign automotive acrylic enamel is great, but costs a lot more.

And the ultimate is Imron from DuPont

I painted signs twenty-five years ago with Imron that still look great.
Click to expand...

Make sure you use a proper respirator if you use Imron. It is extremely hazardous when breathed.

Mike
Corporate Member
They make a brushing version that is not as bad.

Skymaster said:
+1 only point I wood add MAKE SURE NO EDGES ARE EXPOSED tp the weather, wrap em with a trim dadoed to slip ply into
Click to expand...


I would even suggest going a step further and using aluminum channel to create a rain cap for the top (and sides if you wish, but NOT the bottom) edge of the plywood and use some lightweight aluminum sheet metal to create a custom rain cap for each 4x4 post (cut sheet metal an 1-1/2" oversize and bend a 3/4" lip all around and fold or beat over the corners so everything looks neat. Only nail or screw on the vertical edges -- you want to avoid any penetrations to the top side. The more you can protect endgrain from absorbing rain water (paint breaks down over time, aluminum lasts) the longer everything will last.

Jim
Senior User
I know you said no routed numbers but I want to relate an experience. I made a similar sized sign for a former church. I used a piece of luan plywood the same size as the sign to lay out the letters, numbers, and symbol. I used lettering guides for the lettering and got approval for the layout and appearance. Then I cut out the areas that would be inset in the final sign with a jig saw. A few brads held the resulting template to the blank - I used guled up pressure treated 2X - and I routed it out with a plunge router equipped with a template guide and spiral up cut bit. I then painted the flat areas with a dark house paint and the router cut areas with white house paint. It needed touched up about every 5 years.

Pressure treated 2X worked about like you would expect. It was wet, so it didn't want to stay glued together as it dried, and it warped. If I was to do it again, I would invest a little more in better wood. Even just using southern yellow pine that is not treated - so relatively dry - would probably be better.

But the sign lasted and was complemented by everybody that saw it. The ability to do the layout on the plywood and make sure everything looked right was a significant advantage. 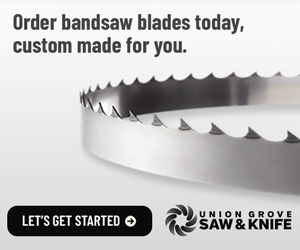