Donn
Corporate Member
While building the coffee table, which I recently posted, I experienced a situation that provided a lot of momentary anxiety, pain, and a little humor. I shared this experience with fellow-woodworkers during the recent Raleigh area shop crawl, but I thought others may identify with my story.

The upper and lower aprons on the coffee table are made utilizing bend wood laminations, which was a first for me. For those not familiar with the technique, it involves cutting the stock into thin strips (mine were 1/8"), glueing both sides of the strips, stacking them to the desired thickness (I wanted about 3/4" so I stacked seven strips...I know that is more than 3/4, but I wanted to have plenty of thickness so I could thoroughly sand both sides), the glued stacked is then placed into a pre-made form and clamping pressure applied to bend the entire stack. In my case, the strips were 8' long, so it required a lot of glue and it took more time than I was expecting. Even though it was my first time, the process went reasonably well for the lower apron. That said, I was determined to make the process for the upper apron even more efficient through better preparation. So, I got everything laid out, including a new bottle of glue because I knew the bottle I had been using wasn't enough for the entire apron. All was going smoothly and as I expected I ran out of glue, so I switched to the the new bottle. When I squeezed, nothing came out - I didn't think it was a big deal, I thought it was merely dried material at the tip. As it turned out, it wasn't just the tip, the entire nozzle was plugged. Even though I was getting a little anxious, I thought no big deal, time is not critical - yet; but, I still had to deal with the plugged nozzle. I pulled the entire nozzle off the bottle and started looking for something to remove the plug. The first couple of efforts with an assortment small tools I had within reach didn't work, so I grabbed a Phillips head screw driver and inserted it into the tip of the nozzle and began pushing. I was holding the nozzle in one hand and pushing into the plug with the other; I knew that I needed to be careful, but when the plug finally released, somehow or another the end of the screwdriver plunged into my hand! It was one of those moments when you knew it was going to hurt, but your brain and hand did not immediately communicate with each other...but when the brain finally realized what the hand had experienced, it REALLY HURT!

Time was now becoming and issue, what do I do...finish the glue up or take care of my hand? My hand hurt, I could see blood under the latex glove, but I was only halfway through gluing up the apron. After taking a minute or so to assess my situation, and for some reason finding a bit of humor in it, I decided that even though I was hurting, there was a whole lot of work involved in getting to the point I was at and I didn't want to do it over. So, I went about finishing the glue up and successfully bend the material into the desired shape. I am sure there is a lesson or two to be learned from this experience, only time will tell if I learned them.

Below is a picture I took to memorialize my predicament. 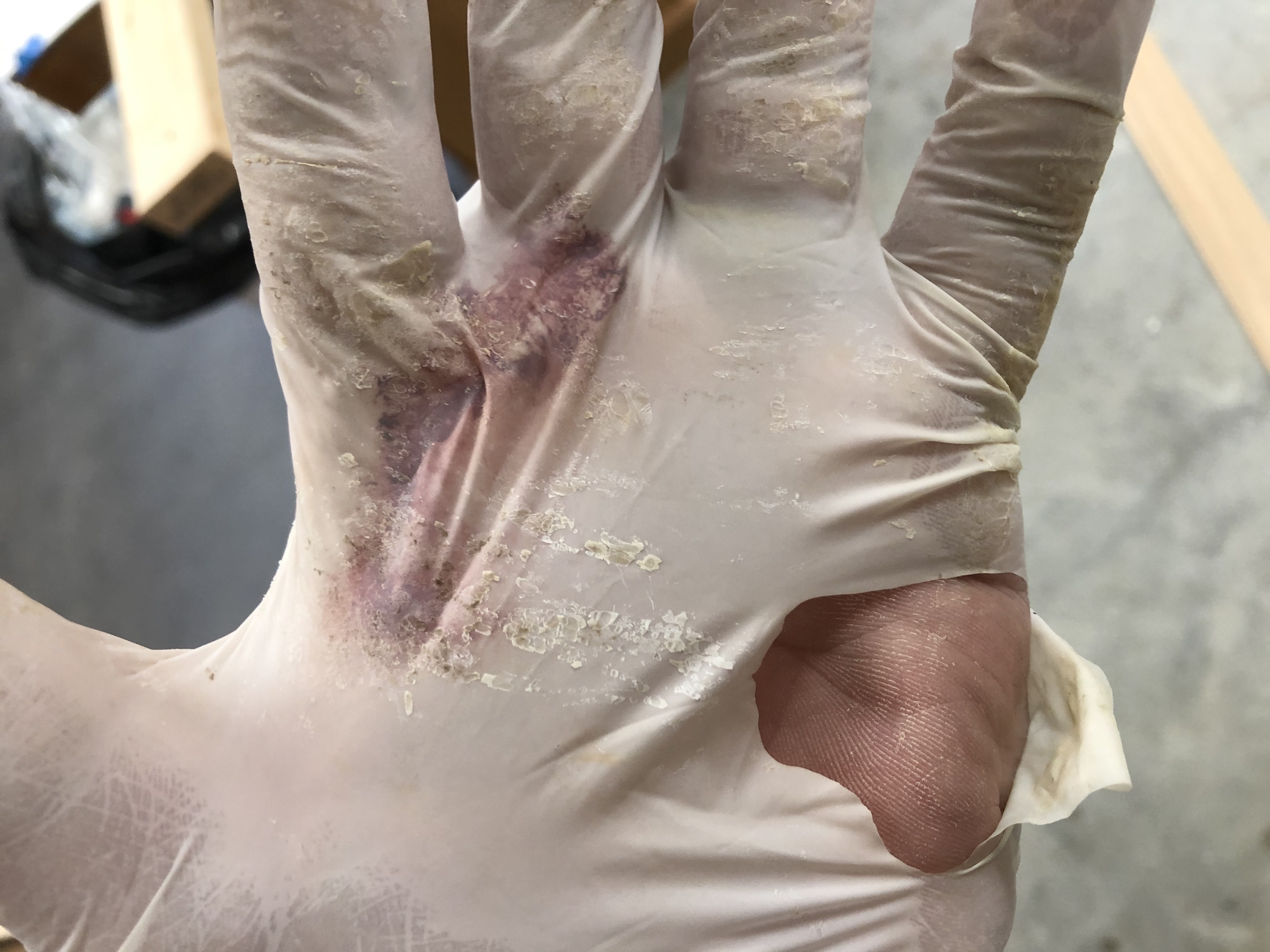 HenryW
Senior User
Wearing gloves to keep blood off the project, eh? Good idea.
Maybe I should take notes!
Hope the healing is less trouble than the glue-up.

Sam
User
I have drawn blood an amazing number of times with screwdrivers, and screwdriver bits on drills! Not much fun.

Michael
Corporate Member
The Safe Work Permits and Risk Assessments that I have to perform at work on a regular basis has make me more aware of situations like this. I am so much more careful to not press with a sharp edge, or blunt screwdriver, at myself in the event something fails and the tool comes into sudden contact with flesh! All I can say is OUCH!

David
Corporate Member
If I don't bleed on a project... I probably was performing the work in a dream.

Stabbed my finger this past weekend trying to hold a screw while attaching a countertop using the drill. It happens.

Bill
Corporate Member
I don't think I've built a piece of furniture in the past 30 years that doesn't have at least some "DNA transfer" in it. Some more than others.

Bas
Corporate Member
Been there, done that. It's a quick trade-off calculation between pain, blood, cleanup, redoing the project, etc. Rule of thumb (pun intended!): If it's not gushing, finish the glue-up
C

Charley
Corporate Member
Some people sign their work with ink or use hot stamps. As far back as I can remember, I always seem to leave a little DNA mark somewhere on all of my projects. Fortunately they are very small.

Matt
Corporate Member
I think of it as, "Making an offering to St. Roy."
O

Oka
Corporate Member
Spilling blood on your work just makes the finishing that much more "sanguine" ......

Tom
Corporate Member
On the bright side, at least you were not standing on a 5-gllon bucket of peach-colored paint.

Dave
Corporate Member
You made the right choice. Well done under pressure (literally). There is little as stressful in life as the "big glue-up."

I feel bad for any loved one who just happens to pop into the shop during a glue-up.

Frank C
Corporate Member
I've found that when I "bleed" on a project which means every project, putting some peroxide on a rag and dabbing the blood stain with it gets rid of the stain and doesn't interfere with any finish. I buy a lot of peroxide!!!!
Last edited: Feb 13, 2020

Dirk
Corporate Member
should we have Adel add some extra Nitrile gloves to that Christmas stocking?

Woody
Corporate Member
If I ever make it big in woodworking, my major sponsors with be Johnson and Johnson and NEOSPORIN® Brand

You could have used the old top on the new bottle.

You could have poured the new glue into the old bottle.

If the whole bottle was dried you could have clamped up the boards you had glued and added the rest later when you had a good bottle of glue.

I often glue half at a time to allow more time for positioning and clamp placement. The bend is easier and there’s just less to worry about.

After the mishap, paper towel and duct tape work wonders.

Glad the injury was minor and the table turned out fantastic.
O

mdbuntyn said:
I think of it as, "Making an offering to St. Roy."
Click to expand...

Yup. Took a box of diamond tread duct tape "band aids" to him once upon a time.
M

Matt
Corporate Member
@Oka I hope that it's nothing too invasive.
O

Oka
Corporate Member
Othoscopic today, we will see if it fixes the nerve pain, just got back home. Thanks for the kind words


mdbuntyn said:
@Oka I hope that it's nothing too invasive.
Click to expand...