Tim
Trying to get a sagging left wing on my Craftsman leveled out...it sags quite a bit but since it's to the left I haven't been too concerned. Getting around to tackling it now, but just cant seem to get it leveled out even with some metal shims taped along the seam - each shim roughly 0.030" (double stacked 0.015" metal shims). I've also cranked the allen screws mercilessly (bent an allen wrench slightly I was tugging so hard) to no avail.

Does anyone have any tips/tricks for this situation? Pics attached for reference, and happy to take more/answer any and all questions. 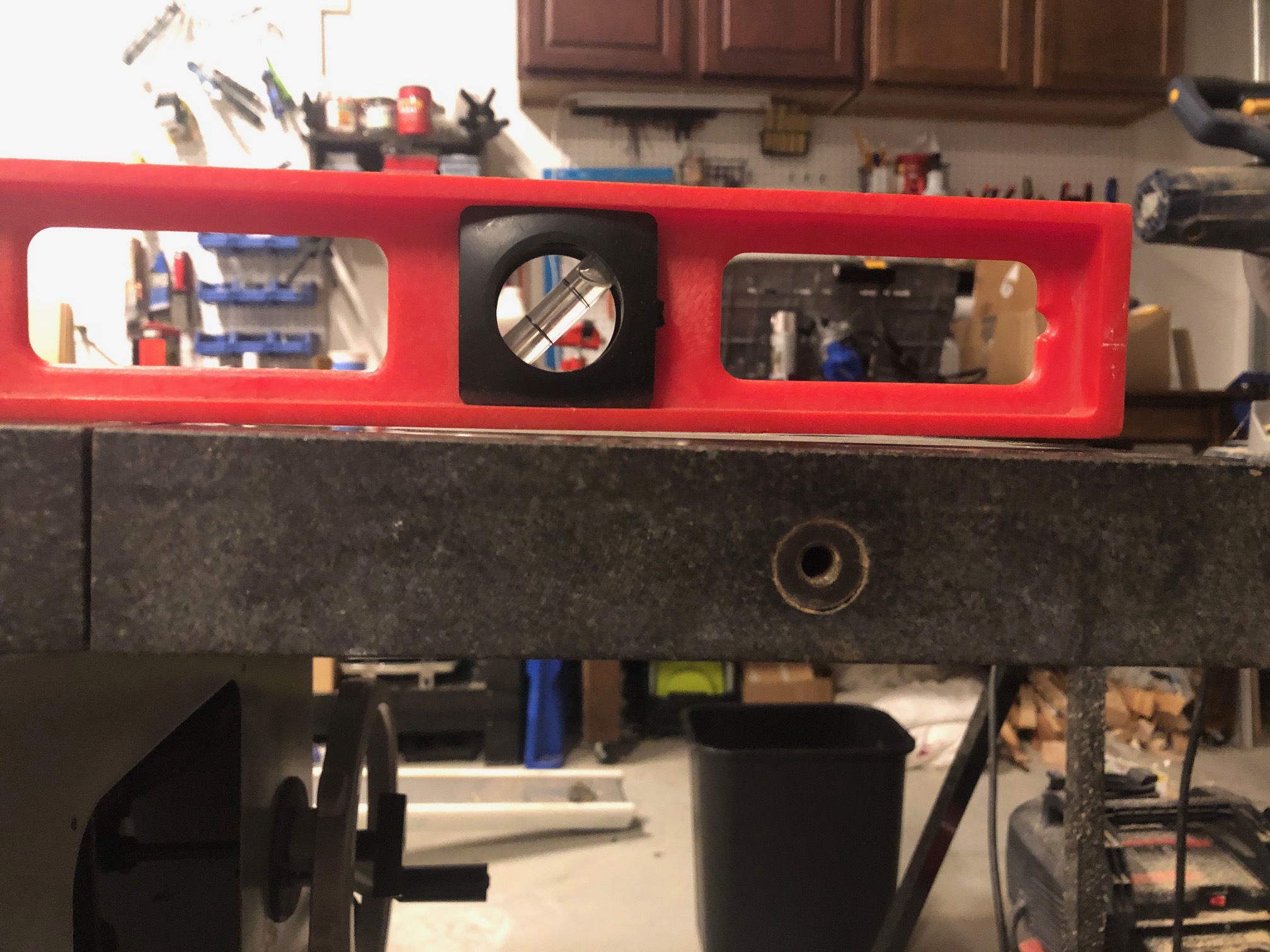 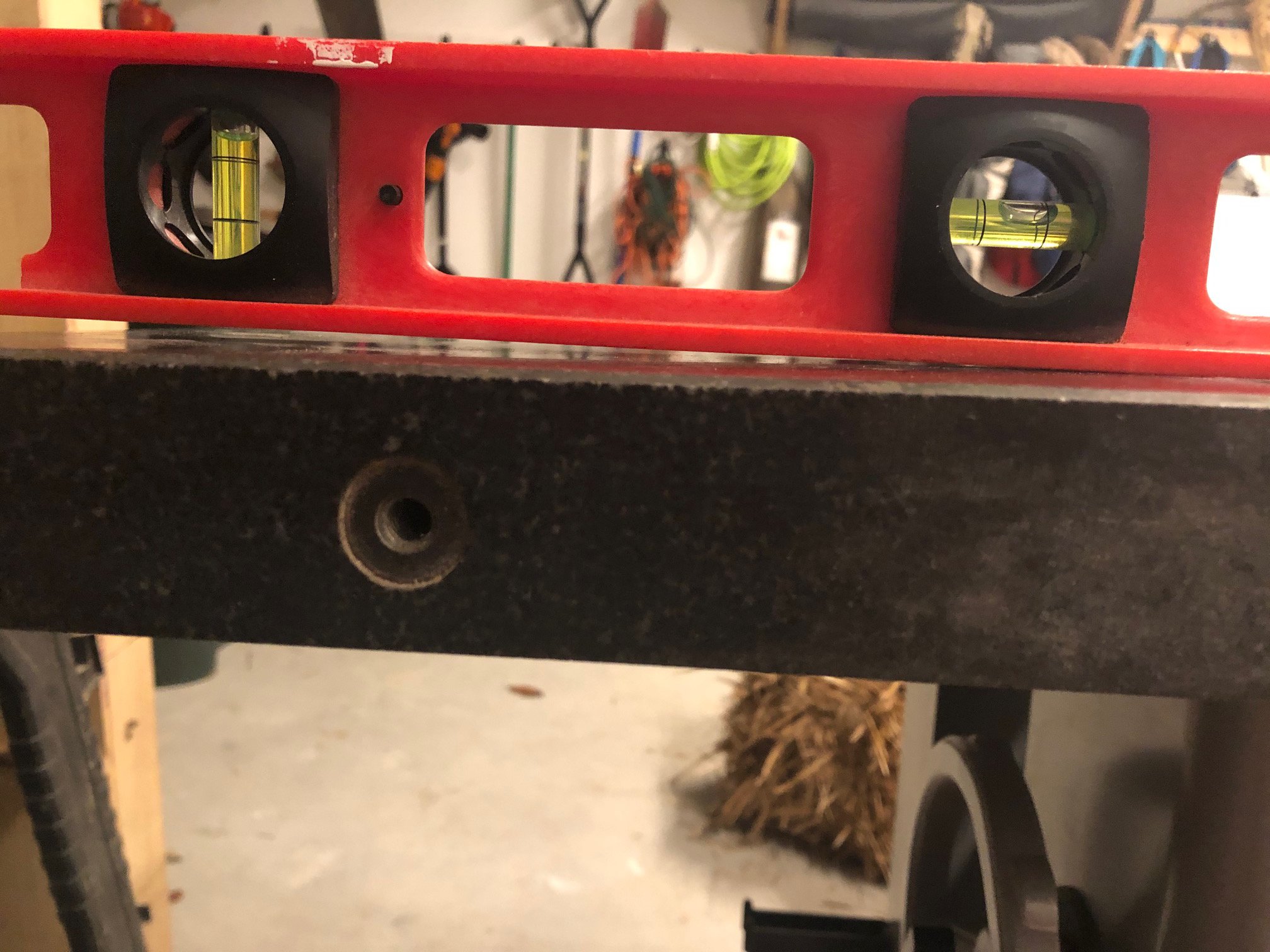 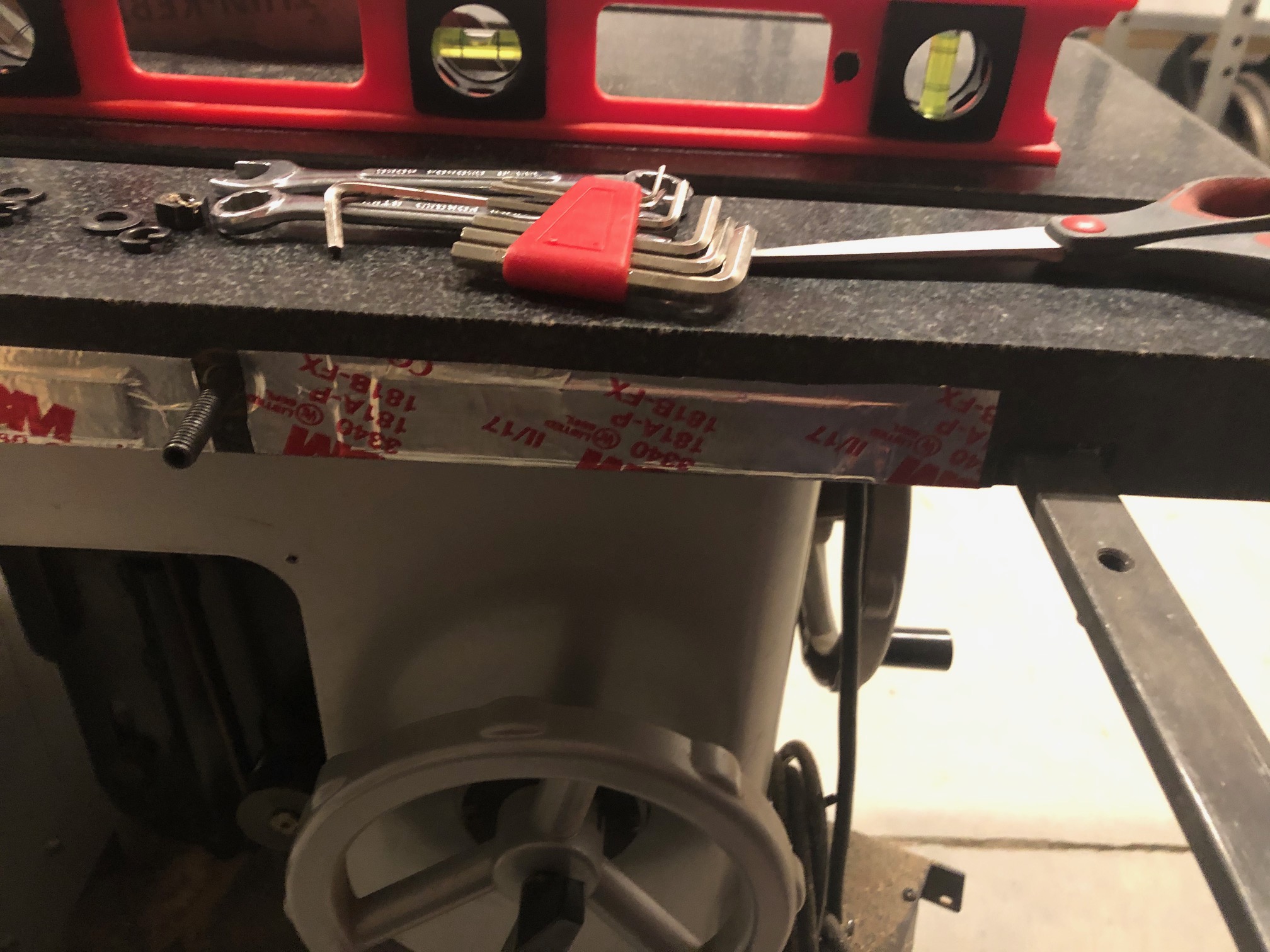 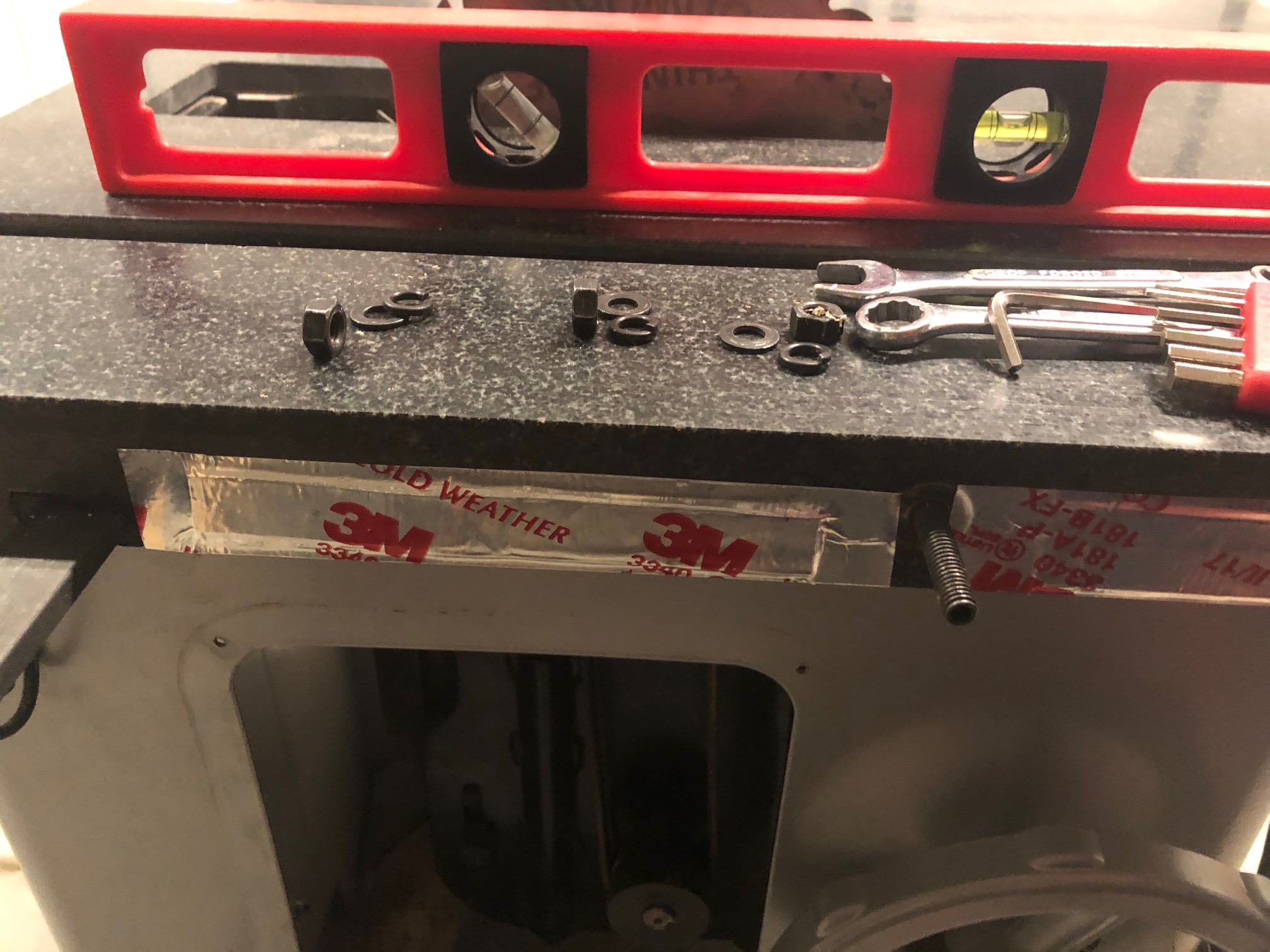 Phil Soper
Staff member
Corporate Member
Here is what I see. Your shims need to be below the connector bolts. I would cut those shims down to 1/4 wide and tape them to the very bottom edge

Bill
Corporate Member
I agree w/ Phil. You want to hold the bottom of the wing out while pulling the top in closer to the main top.
A

Tim
Got it, will do, thanks guys! I'll go try that now.
A

Tim
Alright, it’s better, that’s for sure. But still there...maybe I just leave well enough alone? Is there something else I may be missing here? 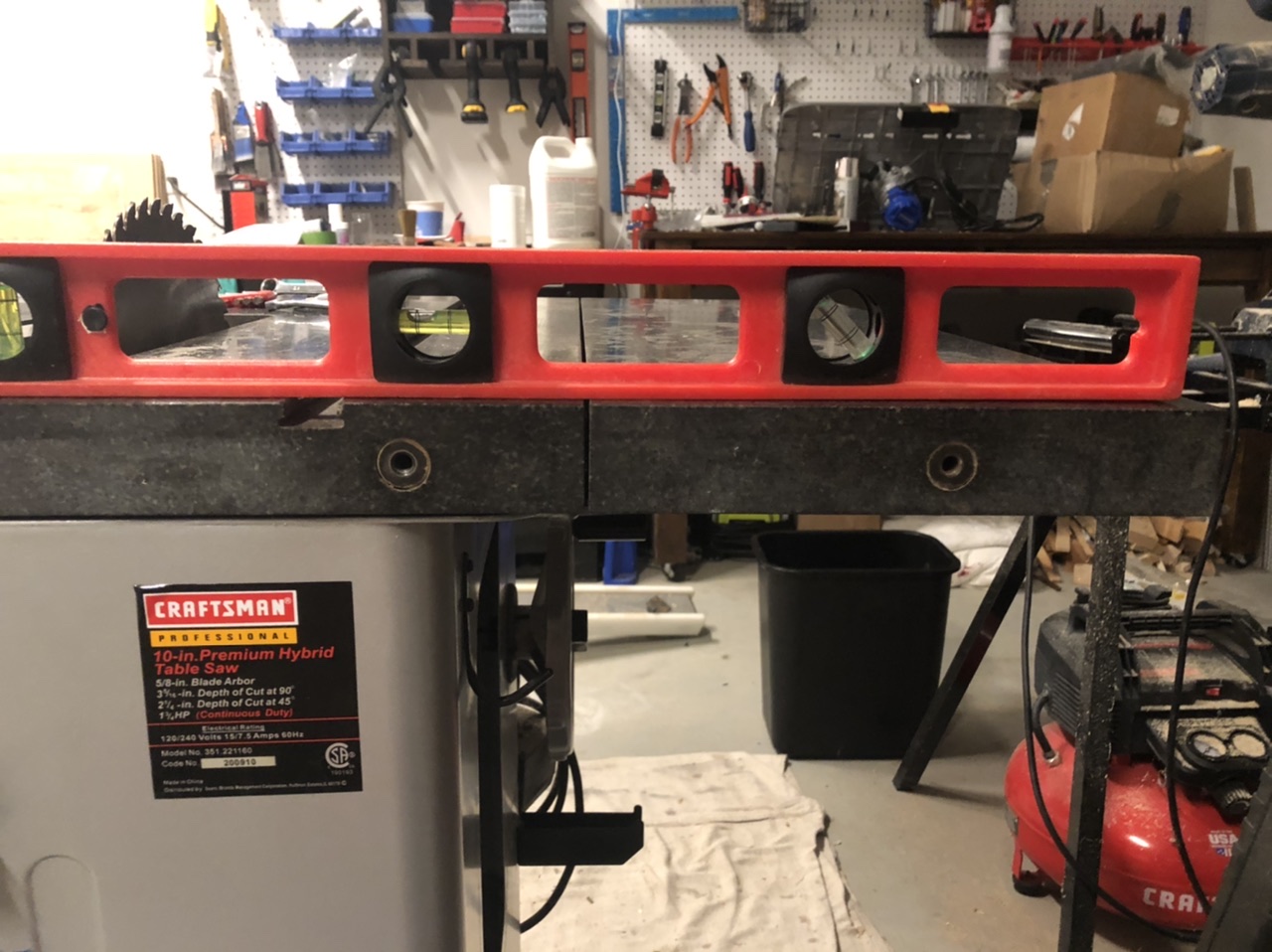 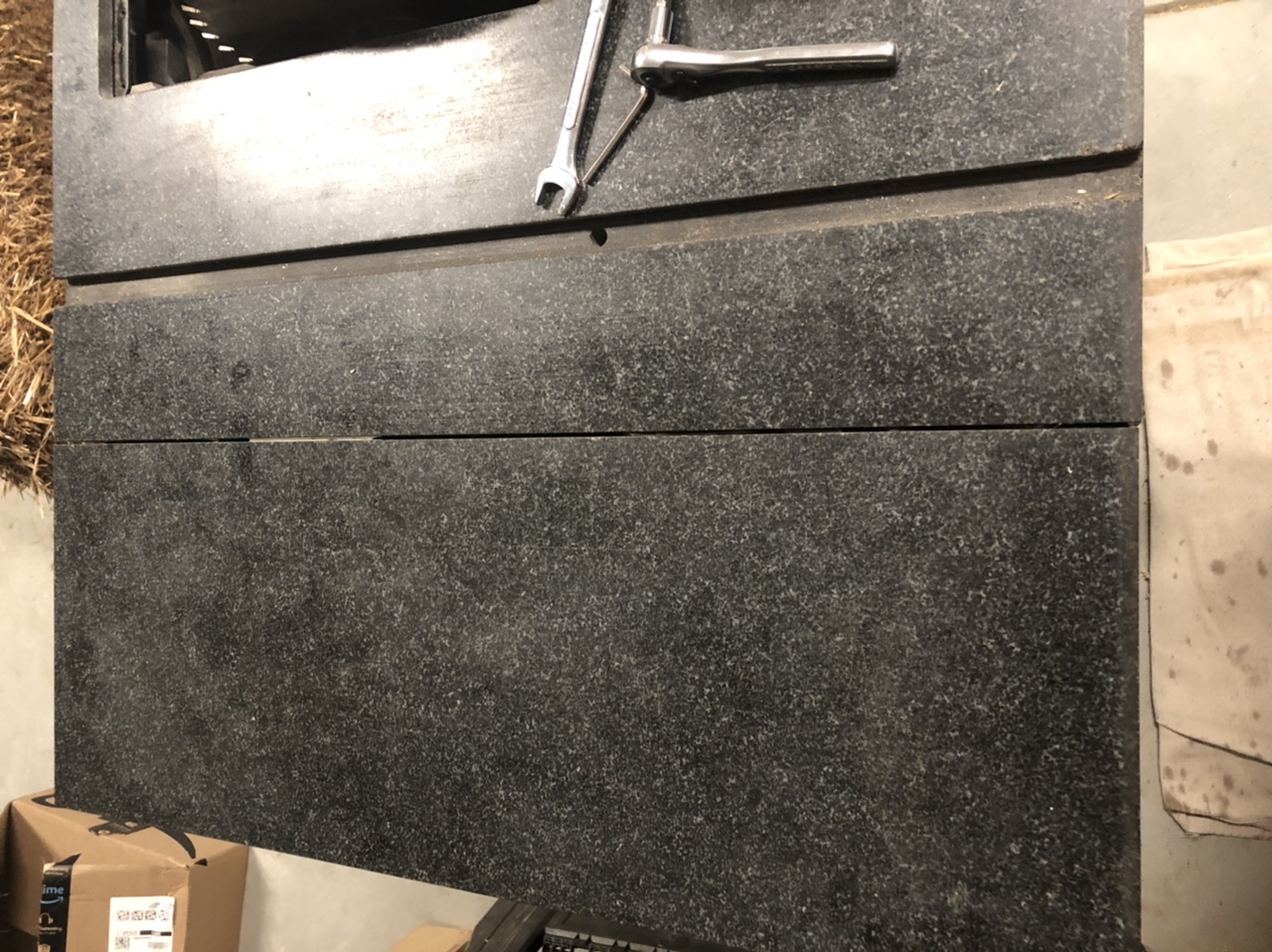 Casey
Corporate Member
If you can add 2-4 additional holes that would help. Drill them smaller like 1/8 or 3/16 and you them to set your level. Drill the holes 1-2 thousandths larger than the bolt. By removing the hole slop this will help controlling the fine adjustment.

What I did on my saw was to take to flat boards and use as legs the wood shim them off the floor to level your top. Then use a super bright light and a piece of paper to see where you have issue in the mating surfaces. It speeds up getting the table Exact.
Printer/copy paper is roughly 3 thousandths. then the trick I do is to go just a tad beyond where I want to be and then cinch down to get it come in to the desired location. This is the technique you use in making musical instruments when mating surfaces. But with instruments if you get it wrong you generally are buying new material. Sorry for overthinking it. Hope that helps
C

Chris
Senior User
Your shims are still too wide, if theyre like what I see in the picture. Like Phil said, make them 1/4" wide, maybe less. You should not be able to see any gap at the top. I would remove all shims, clamp a rigid straight edge across the top, and assemble the wing loosely first. Now, raise the outboard edge of the wing up until its planar to the straight edge and clamp it to the straight edge. Then go under and jam whatever spacers are required to fill the gap underneath and tighten the bolts. THERE SHOULD BE NO GAP ON TOP.
A

Tim
Got it, thanks all. I did cut shims down to 1/4" wide and taped under the three bolts. Chris, I like your idea - I'll give that a try here when I get a chance today. Thanks for the help all, I'll let you know how I fare.

Dennis
Corporate Member
If you have a flap wheel grinder disk, try trimming a little off the top 2/3 of the mating surface.
A

Tim
So got the wings clamped, level as can be, shimmed the gap to the best of my ability with 1/4" wide shims under the bolt locations and...when I released clamps, dropped like a rock. Not sure what to do at this point aside from live with it/hope it aligns when I attached fence rails? 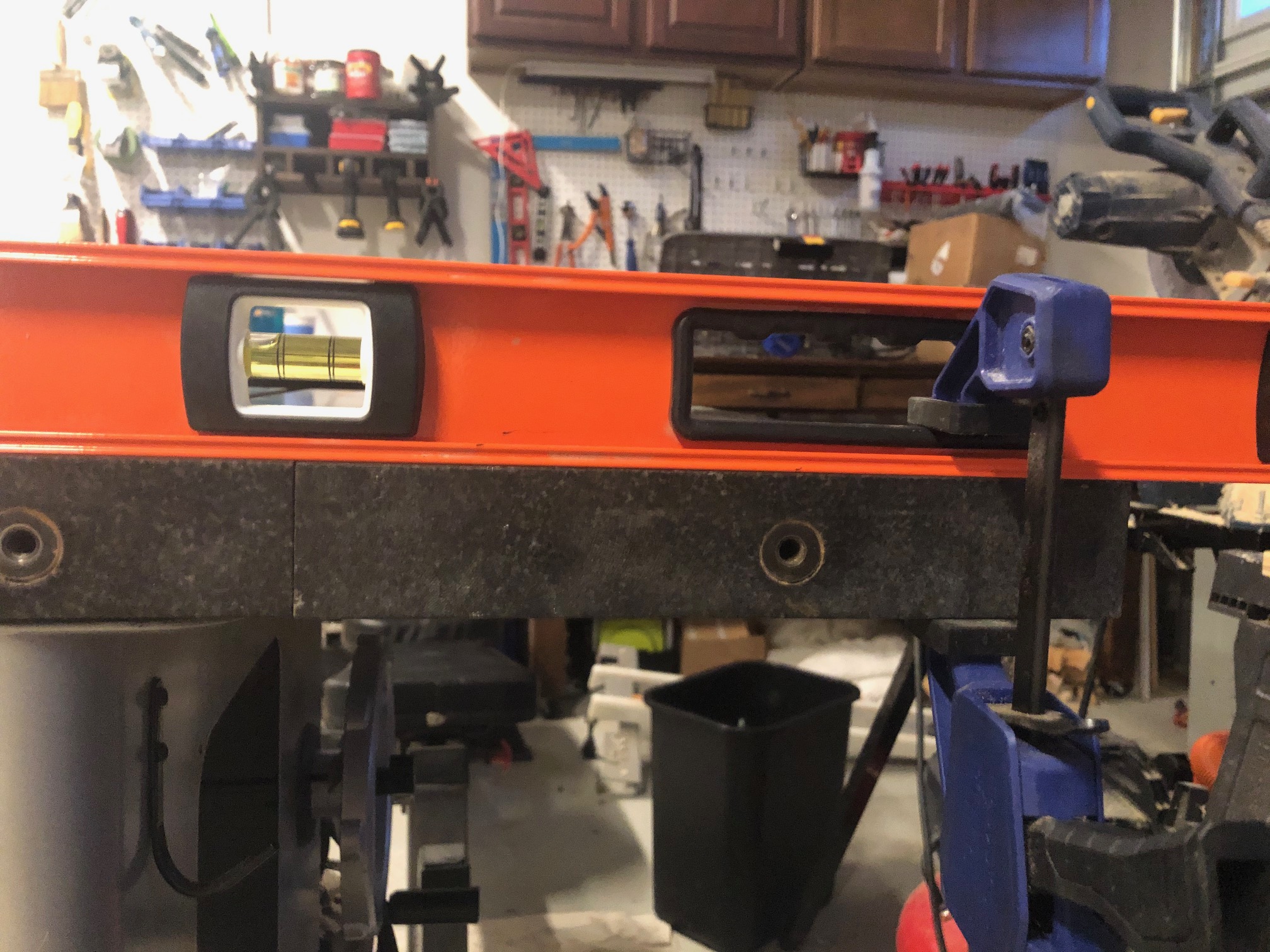 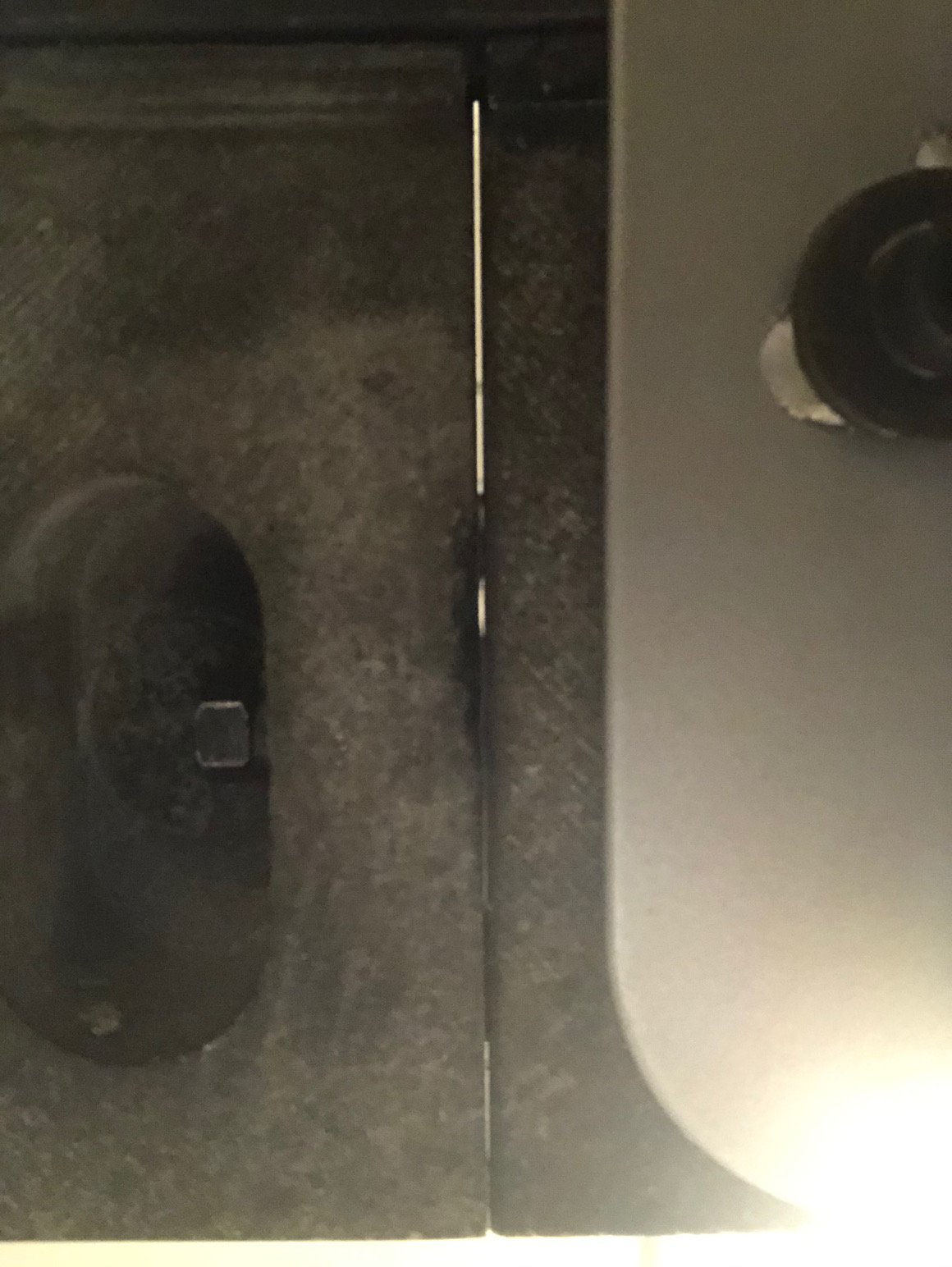 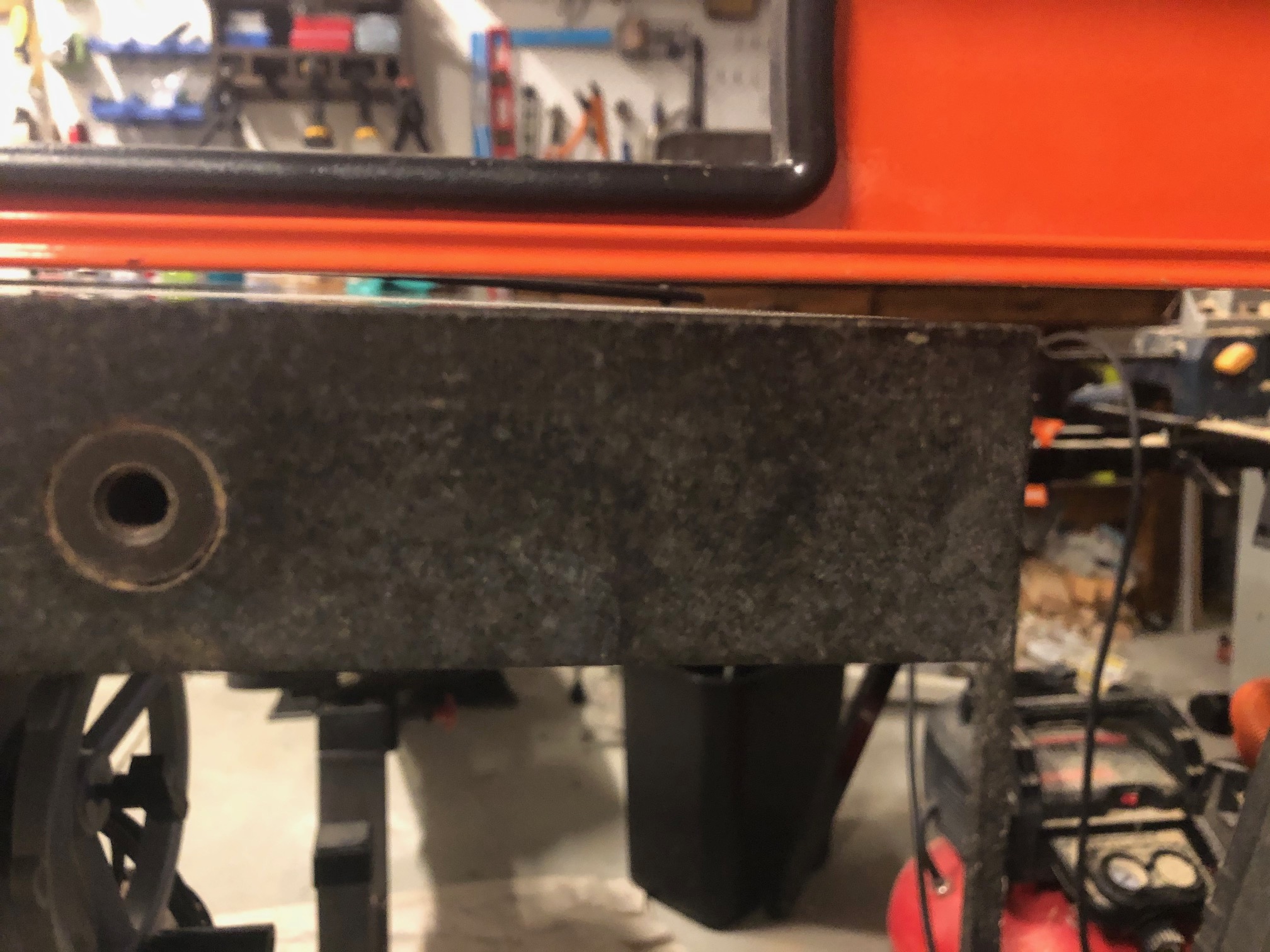 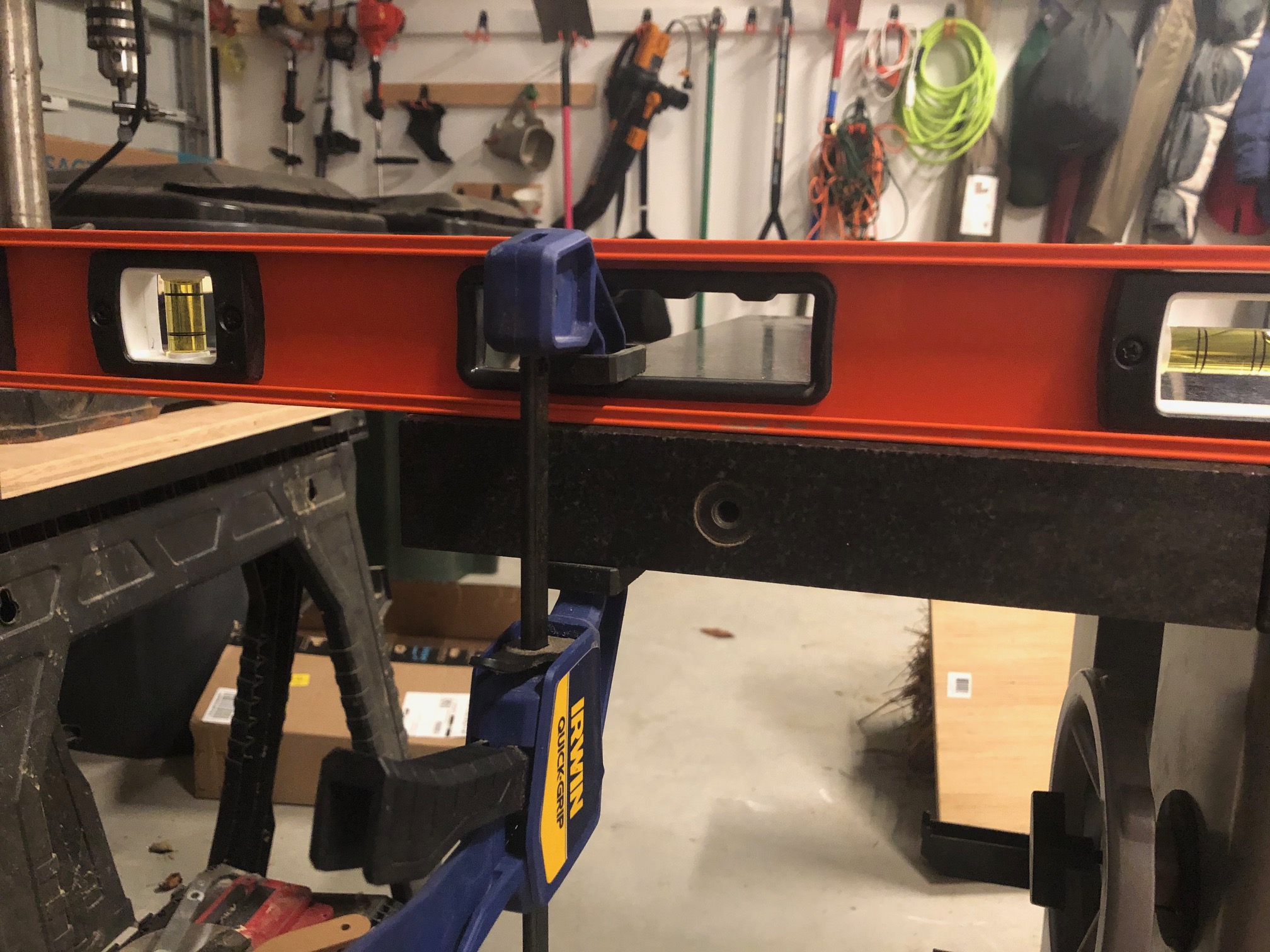 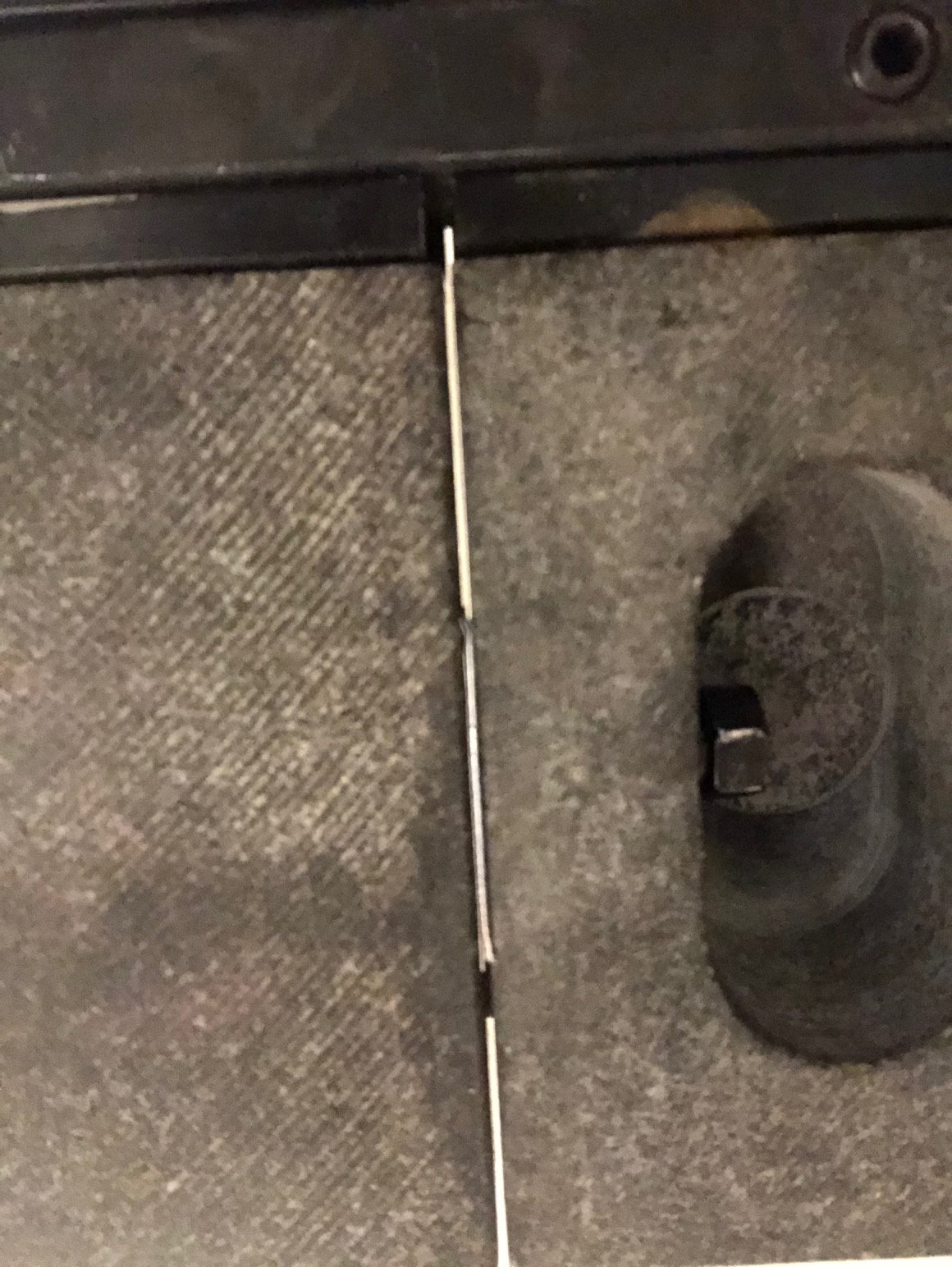 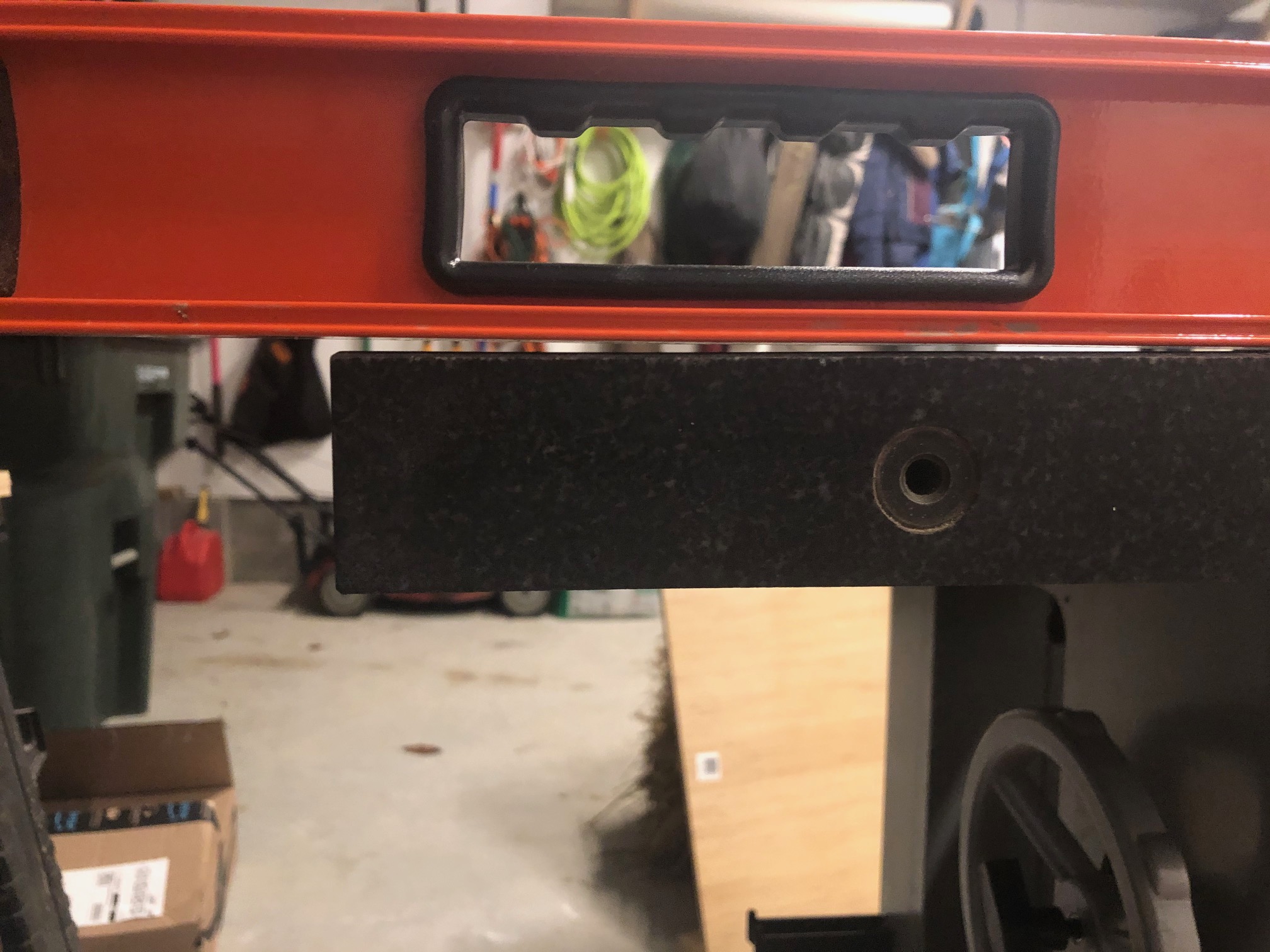 Chris
Senior User
What did you use for shims? you cant use anythign that will compress , even a tiny bit, its an extreme amount of pressure in that joint. also, it looks like you shimmed it at at the top?. I hope that isnt a "good" level you used either.....
A

Tim
Hey Chis - shims are sheet metal, and I shimmed from the bottom underneath the bolt locations per previous recommendations. Not really sure what you mean about "good" level?
C

afman916 said:
Hey Chis - shims are sheet metal, and I shimmed from the bottom underneath the bolt locations per previous recommendations. Not really sure what you mean about "good" level?
Click to expand...

what i mean by a good level is, thats a horrible way to treat it......what is that top made of?
A

Tim
Top's made of granite, and good call, I guess I didn't think of the additional force exerted against the level!

Dennis
Corporate Member
Didn't realize this was a granite top. What about filing the holes in the fence rails and allowing them to add some support?
C

Chris
Senior User
Is it reversible? can you rotate it 180 degrees and try it again?

Fred
Corporate Member
Granite isn't cast iron. Do not over tighten the bolts. The top can break. I suggest clamping straight as you did before and snug the bolts. Then fill the gap with bondo top and bottom. Pack it in with a putty knife. Let harden over night then sand down any excess with a RO sander to flush it with the top. Remove the clamps and straight edge and fill the remaining areas let stand and sand. Tighten the bolts slightly and it should stay. Carefully install the fence.

Jeremy
Staff member
Corporate Member
This is what you want to do (as said by others). It still looks like you have shims above the bolts, maybe you don't. Maybe this will help make it more clear.

Charlie
Corporate Member
As Phil suggested in post #2, cut 1/4" wide shims and locate them flush with the bottom edge of the table and wing. There shouldn't be any gap between the top edges of the table and wing when bolts are tightened.
Jeremy's sketch in post #18 shows the final results. You probably need about .010-.015" shims. A few .000 will make a big difference.
There shouldn't be any other shims used. This really is a simple process. Think of the shims as a lever when you attempt to raise something.
A

Tim
Thanks all - I (unfortunately) have the shims (0.015, 0.010, 0.012 respectively) under the bolts exactly as indicated in Jeremy's photo. When I unclamp, it still drops. At this point I have no idea what the real underlying problem may be, as the shims don't seem to be working 100%. I bolted the rails on last night and tried to muscle the top level by tightening down all other bolts except for the one located on the end of the offending wing. It didn't quite work as I couldn't get holes (fence rail and wing) perfectly aligned and bolt was binding.

The bondo trick sounds like it would work, but a bit too permanent in the event I need to take wing off and adjust table, etc.

I'm understanding the physics and mechanics behind all of this, but at this point I feel like I have some underlying issue I'm simply not knowledgeable enough to think of. When I muscle the table level by pushing up on the outside edge, the gap underneath doesn't change and the shims don't fall out. Which doesn't make sense, so I'm wondering if there isn't some play in the attachment points on the wing itself?

Since it's the left wing in question (right wing is perfect) - I'm thinking about just living with it for now, as I don't anticipate doing much cutting to the left of the blade. I'm not sure if it will cause issues with fence alignment or movement? I'm really at a point where I need someone more knowledgeable than myself to look at it with me in person, which isn't realistic right now.

Again, I've followed ya'lls advice to the letter and I really appreciate the help. Frustrating it wasn't as simple as shimming it, which I thought it would be. I'm definitely using the right thickness of shims in each spot - at least I think so, as I had to meticulously yet forcefully tap them in with a rubber mallet.

Open to further suggestions, willing to take a few videos and upload...but if I can "live with it" without affecting the functionality, I just might do so until I feel like taking the fence and rails off again and re-tackling at a later date.

The fact that I have the 45 degree tilt mechanism back in working order and the blade parallel within 0.0005/0.001 to the miter slot makes me want to just get cutting. Those were the two biggest hurdles from when I bought the saw.
You must log in or register to reply here.
Share:
Facebook Twitter Reddit Pinterest Tumblr WhatsApp Email Link