Jim
User
I posted previously about making a staircase saw patterned after an old English version. After using the saw I liked it so much that I decided I wanted a smaller version for finer case work. I used the plate from a Stanley gents saw to make the version you see below.

One of the main goals was to reduce the weight of the smaller version. With the steel, brass and dense purple heart my first saw weighed in at 2 lb 6 oz. The owner of the antique saw informed me that his weighed slightly over 2 lb as well. These are not light saws and take a bit of practice to use. The weight of my new saw is down to 14 oz and feels more like a small carcass saw when in use. Reducing the weight was accomplished by using thinner brass plate and steel sole, walnut instead of the more dense purple heart, open vs closed tote and a thinner plate for the saw blade.

An important aspect of making any saw tote is grain orientation. This is especially important with an open tote as you want the grain running lengthwise through the point where the tote takes the force of the push stroke. This isn't that difficult if you are making a tote that attaches to a saw plate, but with this saw the tote and body are all one piece. Using a blank with even, straight grain would have meant either a weaker tote or slanted grain running through the body. Fortunately, I was able to find a walnut board with the perfect grain pattern as you can see below. The grain bends just right to match the angle the tote makes with the body. I love it when form and function meet. 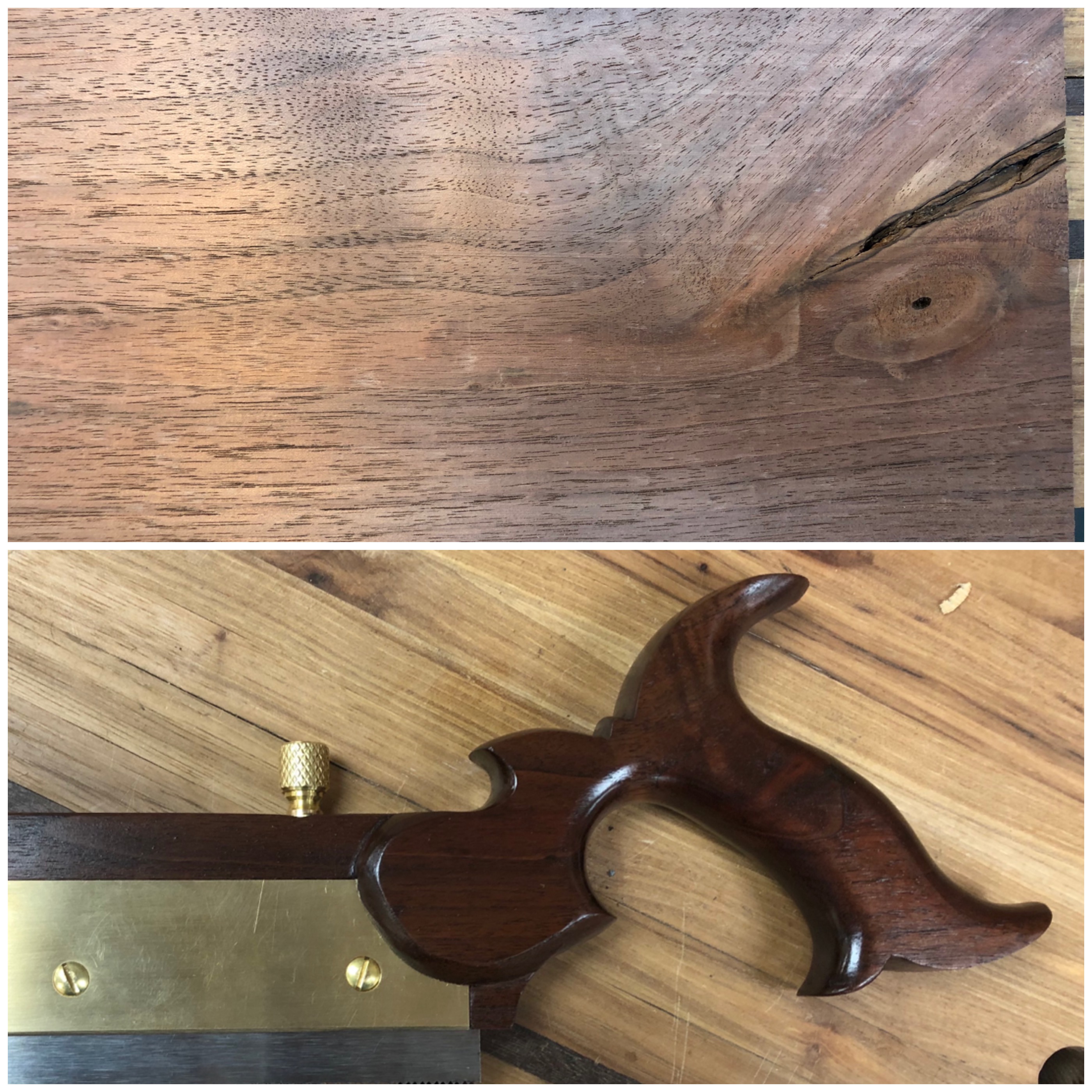 Another concern was in the position of the blade relative to the saw's centerline. In the original version (both the antique and my larger version) the blade is to the extreme left. As you push the saw there is a slight need to compensate for the "off-centeredness" of the blade. In the smaller version I decided one way to mitigate this was to keep the handle a full 7/8" thick, but then thin the main body of the saw down to 5/8" by removing material only from the left side. This doesn't seem like a lot but as you'll notice in the next picture it does position the blade much closer to the centerline. This makes the push motion more natural. 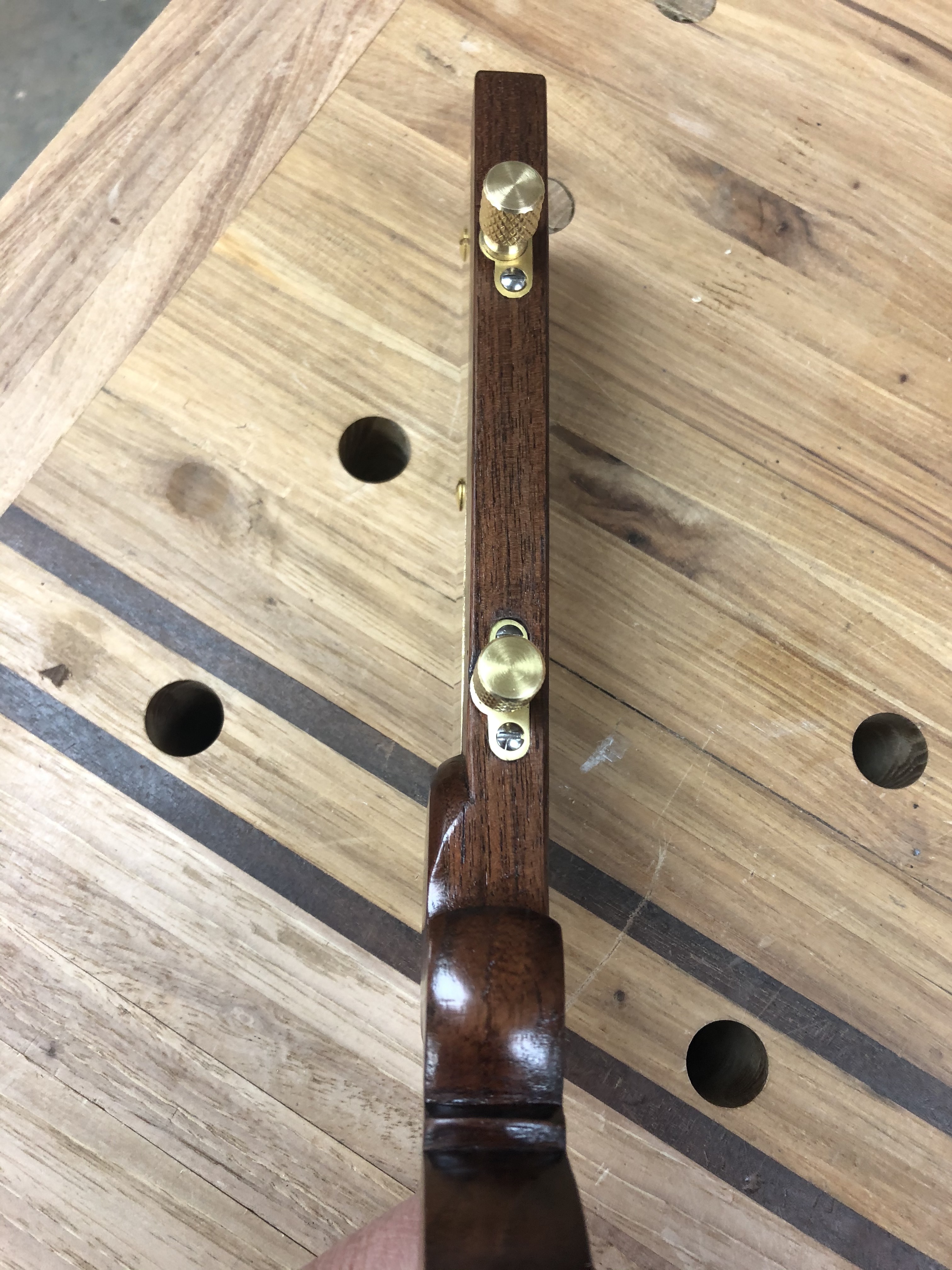 Overall, here is how the two saws compare: 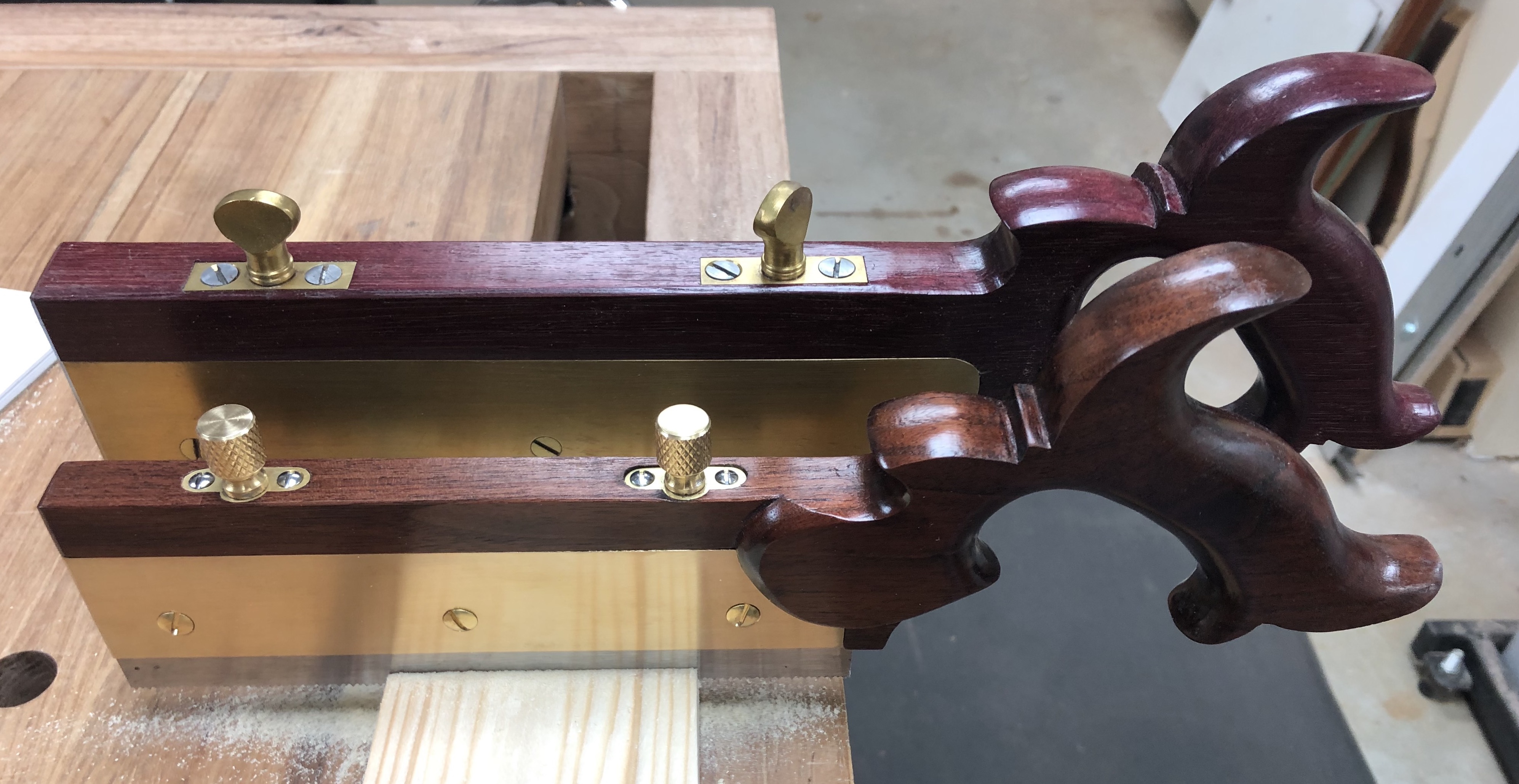 I thought the point of the blade being off center was to make cutting next to a wall or stair edge easier?
What do the screws on top do?
Is the blade slotted where the screws on the side run through?
Do you like single malt or a blend?

Jim
User
@Mike Davis It's not as obvious in these pictures, but this picture with the saw plate removed shows the purpose of the screws in adjusting the depth stop. These screw into brass bars that connect to the depth stop's sole. The brass plate overlays the saw plate to add stiffness. As you can see the three screw holes go through both the bar and the saw plate. 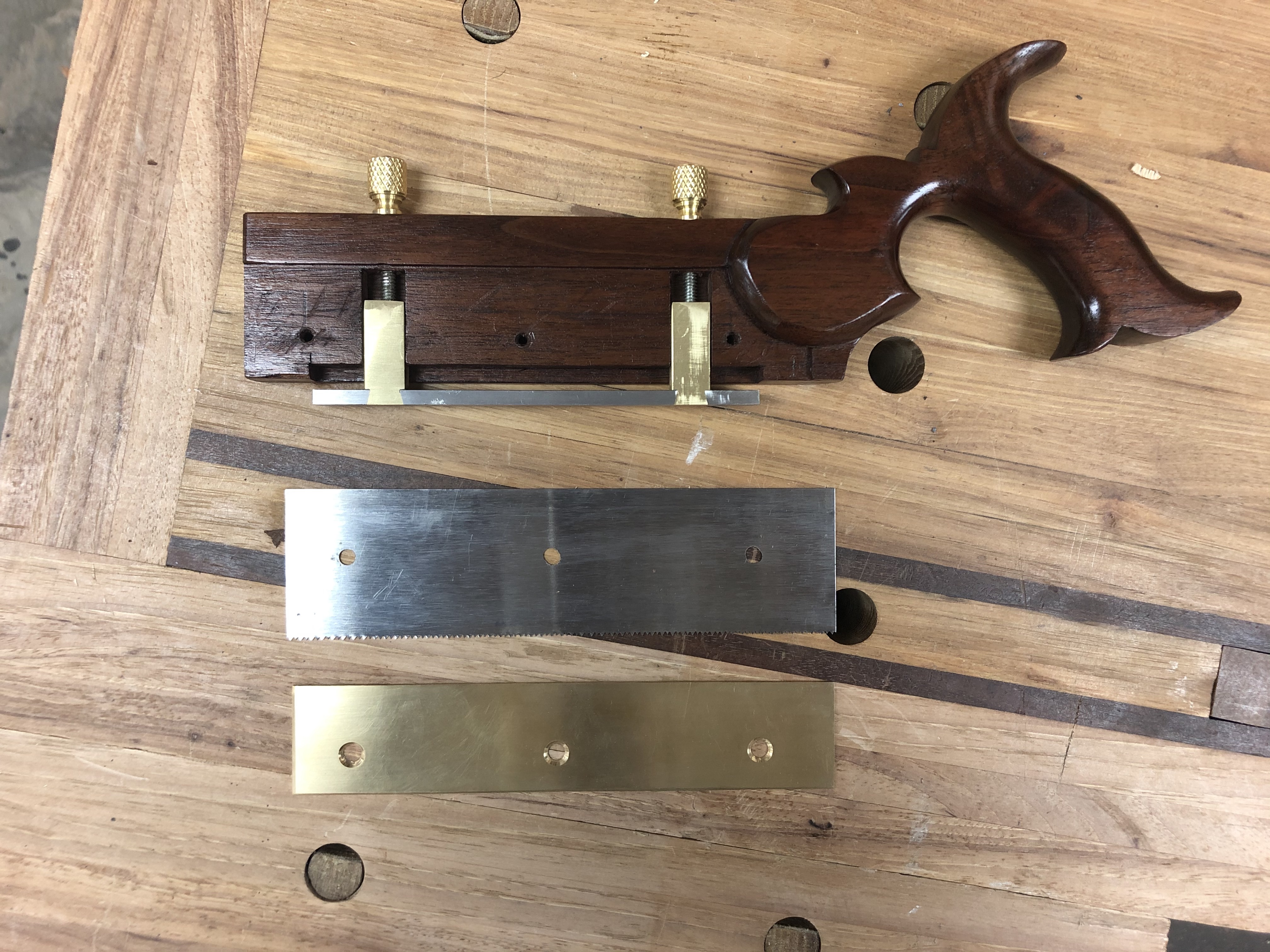 Even in the antique saw the thickness of the brass plate keeps the saw from being all the way to the edge. FWIW, I don't believe these saws were ever intended for cutting the slots in staircase stringers. The blade is simply too long. At 9" it would not be able to make the riser cuts which are typically in the 6"-8" range. I believe they were always intended for cutting dados, which is how I plan to use them.

Sounds like a bribe! Maybe we do a workshop on making these. The tasks involved are well within scope for the woodworkers on this forum, though it's more than would fit into a day to make one of these. It would require advance prep, finish at home, or both.

Mike
Corporate Member
I think I can do that, not clear on the screw set up on top. Looks like there needs to be a collar to lock the screw in place so the depth stop moves and not the screw heads.

The rest of it is clear and I could probably engineer something.

Jim
User
@Mike Davis Here's a better picture to show how these are made. For the larger saw I filed the thumbscrews from brass door knobs. With the smaller saw I made the knobs from a section of round brass bar that already had the knurling. I use solder to attach the threaded rod to the knob, and also keep the stop nut in place. 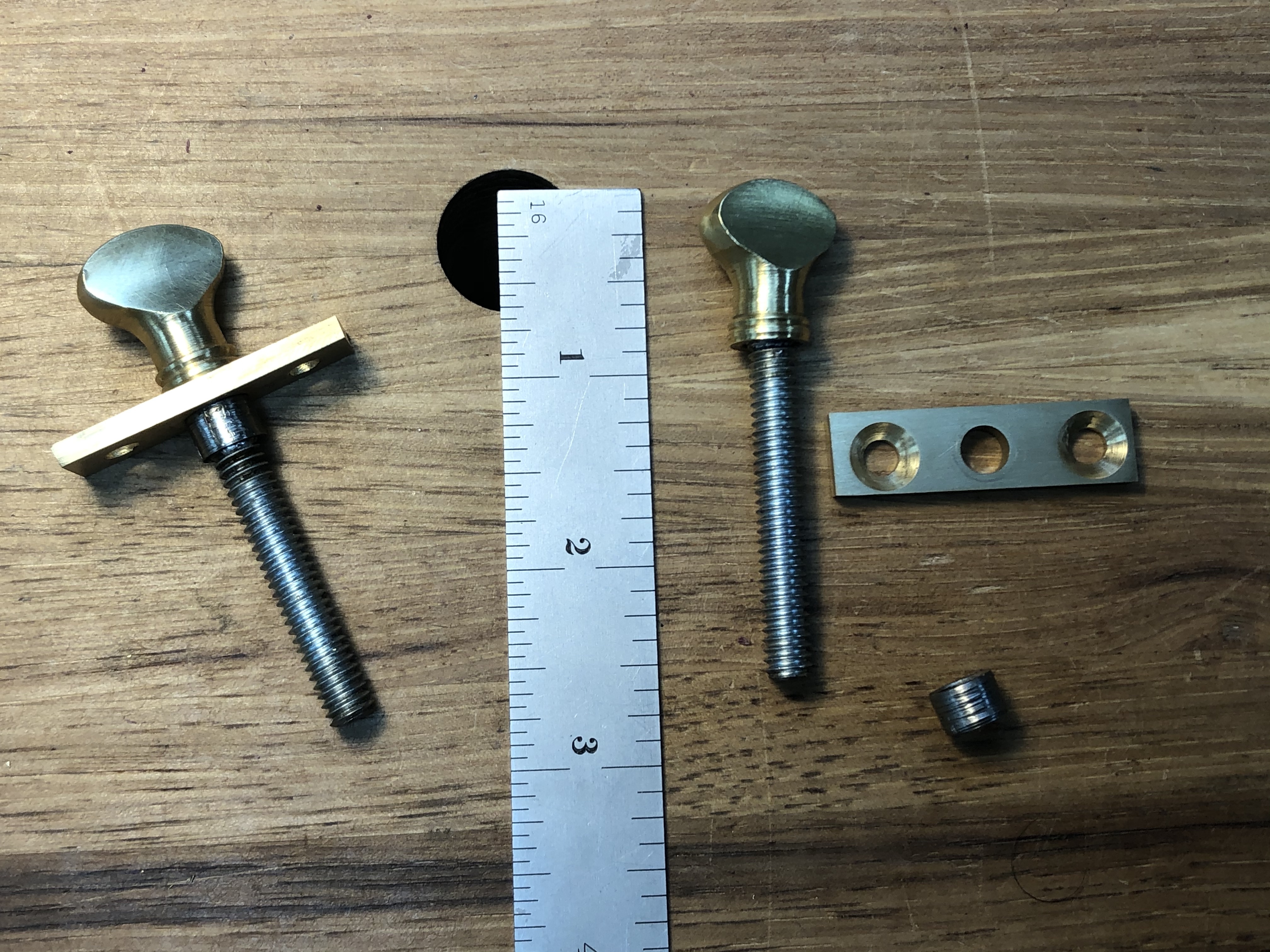