An Aggravating Project - But It's Done!

Donn
Corporate Member
When I started this project, I had no intentions of posting anything, it didn't seem like it would be that big of a deal. It all started out as a promise to my wife, so I had no choice but to see it through to completion. We have been in our house for almost three years. It is a very nice house, but it has some peculiarities, such as very limited closet space, including the pantry. The pantry is like a small closet with adjustable shelves, but the biggest problem was accessibility...if what you wanted wasn't immediately visible you had to move a bunch of stuff and hunt. The other issue was that we didn't have a good place to store all of the cooking spices, so we hung small baskets on the back of panty door, which meant that we could not fully utilize the already limited shelf space if we wanted to fully close the door. So, without thinking about want I was getting myself into, I committed to building a kitchen island with storage space for the spices and then I promised put make the pantry shelves into drawers. I recently posted about the kitchen island...it turned out well and I really enjoyed building it.

My attention now turned to the pantry. It wasn't until I was taking preliminary measurements that I realized it wasn't a square or rectangle it had five sides! While I am not absolutely sure, I think one of the back corners is angled to create a small chase for the lines to the upstairs AC unit. After some thought I realized that we could still install slides, but the travel would be limited to the shortest side. Another issue was the face frames, one side was 3/4" the other 1.0"...meaning I needed to install rails of the appropriate dimensions so that the drawer slides would clear the respective face frames. Okay, so far so good, but here where things started to get problematic. I made the top drawer, installed the slides and attempted to fit the drawer...it fit fine for the first 4" but then it stopped. I lost track of how many times I sanded/reinstalled, sanded/reinstalled the drawers and/or rails until I finally had a working drawer! It was obvious that the sides of the pantry were nowhere close to being square, but I didn't know how far off square. I went to Klingspor looking for something to take and internal measurements of the cabinet, they didn't have anything; fortunately, I did speak to Phil and Rich (who were building the canoe) and got some advice for a homemade jig. To make and overly long story shorter, the back of the pantry was at least a 1/4" narrower than the front. I ended up tapering the rails on the jointer which made the job much quicker than sanding, but each drawer required several adjustments but ultimately all worked!

Bottom line, retrofitting cabinets with drawers is an aggravation...but my wife is happy, so I am happy. That said, in the future I hope I do a better job of thinking things through before I commit to a task. The pictures below depict a relatively nondescript pantry...but don't be fooled - it is a BEAST! 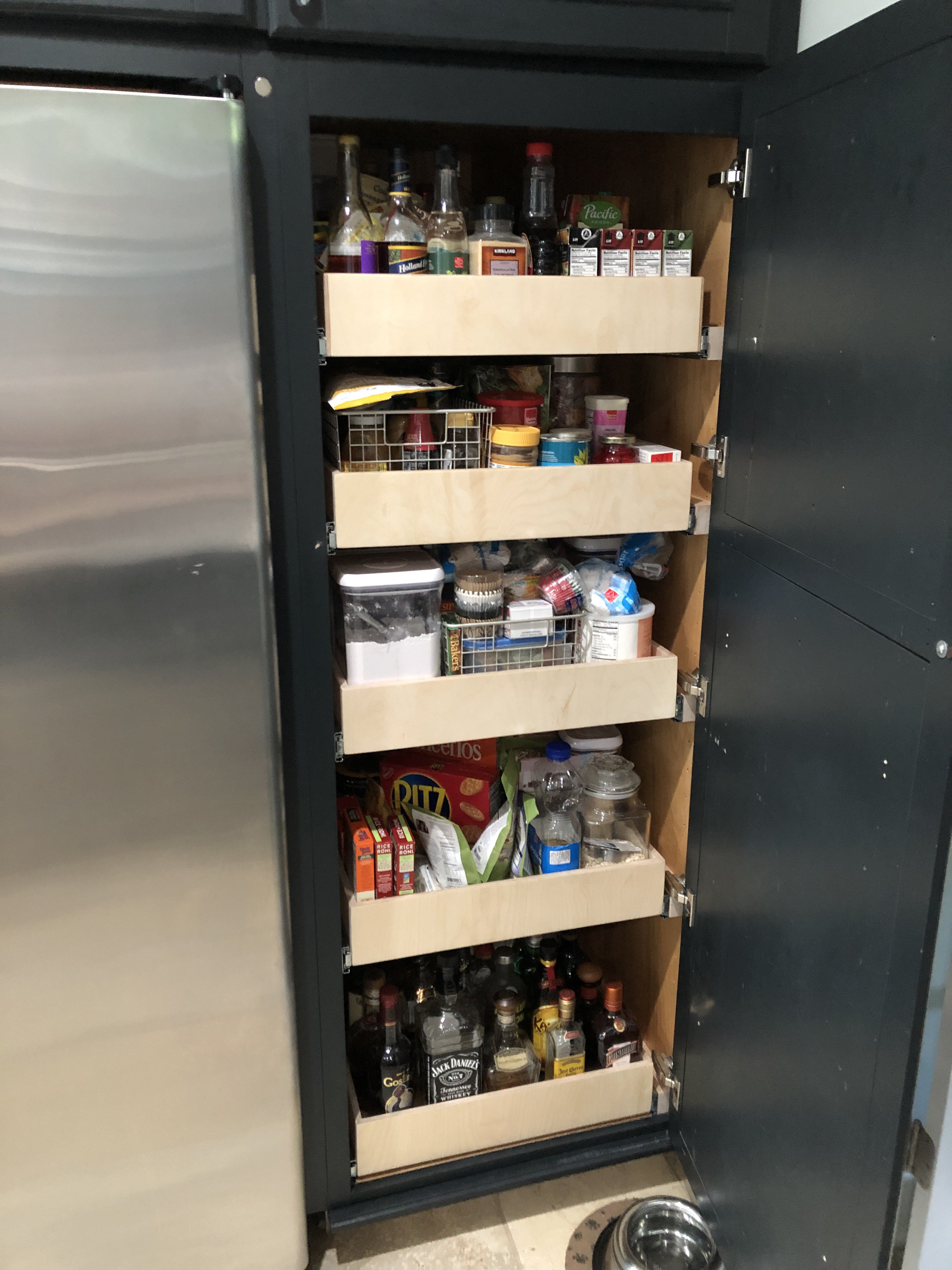 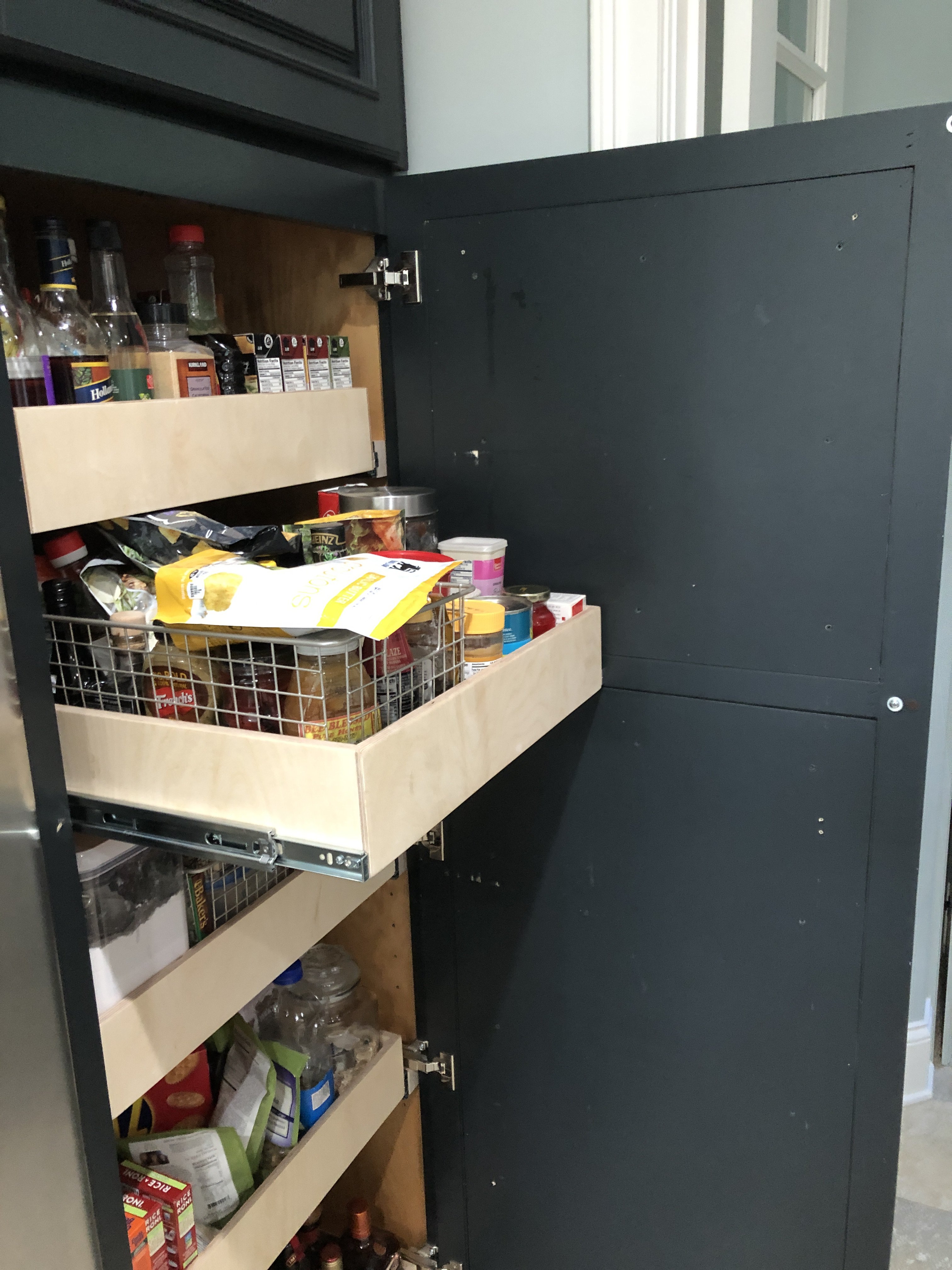 Casey
Corporate Member
That is awesome, yes homes and the designers and builders often do some really weird things.
My house for whatever reason has 3 different lights on a 4-way switches, weird but cool I guess, just one of those oddities, glad you got it done, Happy wife, happy life.

Jeremy
Staff member
Corporate Member
Nice work Donn. Funny how the "simple" things can turn out to be anything but. What did your jig look like to do internal measurements? Maybe some kind of shop made bar gauge like this: 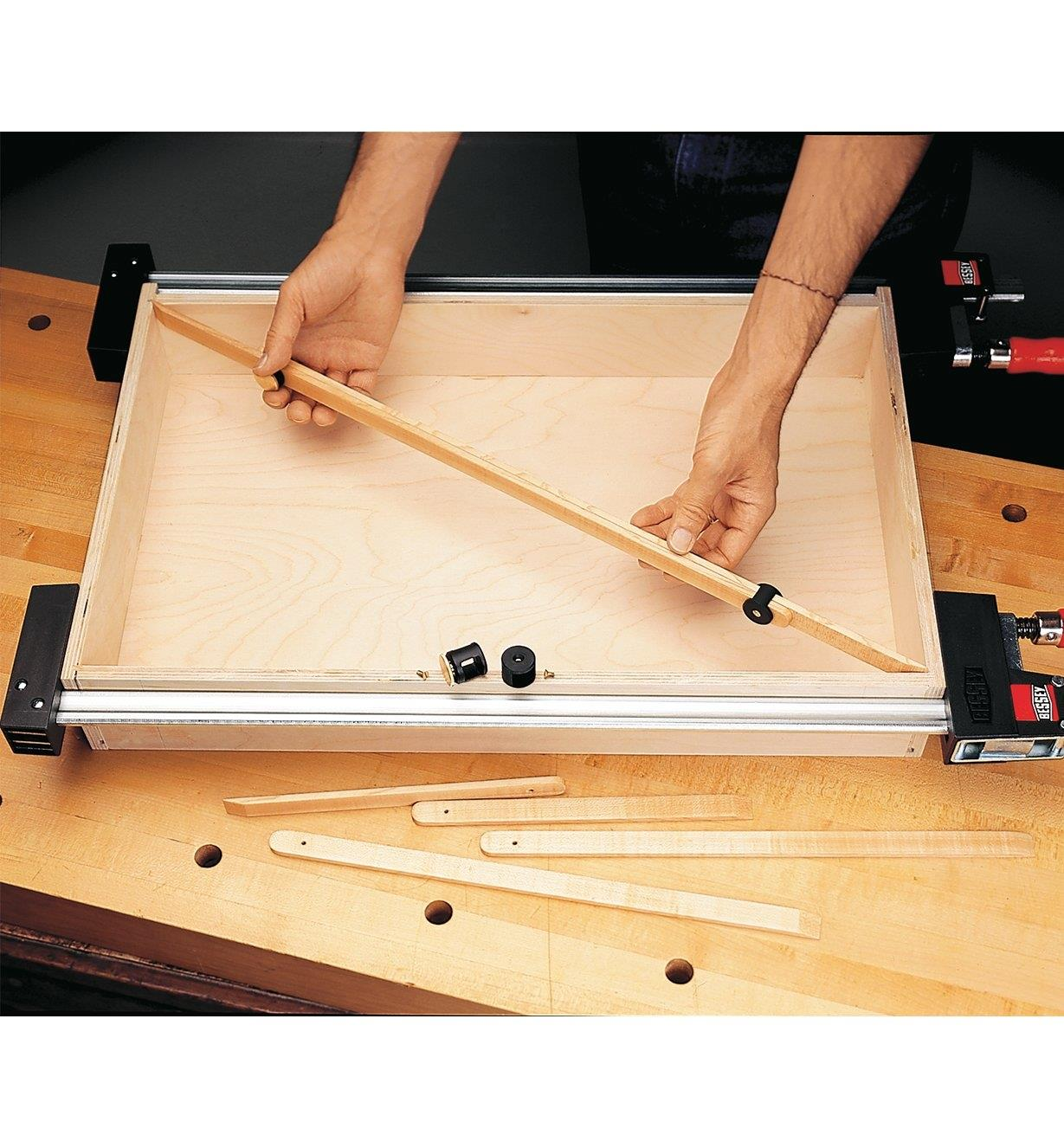 Jeremy Scuteri said:
Nice work Donn. Funny how the "simple" things can turn out to be anything but. What did your jig look like to do internal measurements? Maybe some kind of shop made bar gauge like this: View attachment 197517
Click to expand...

Jeremy, Yes; that is exactly the type of jig that Phil suggested. It proved to be very helpful.

Coleman
User
Donn, great job. Best shelf you created was the bottom one - I am sure after this build you had it pulled out more than the spices
W

Ernie
Corporate Member
I've been using one of these for years. Works great.